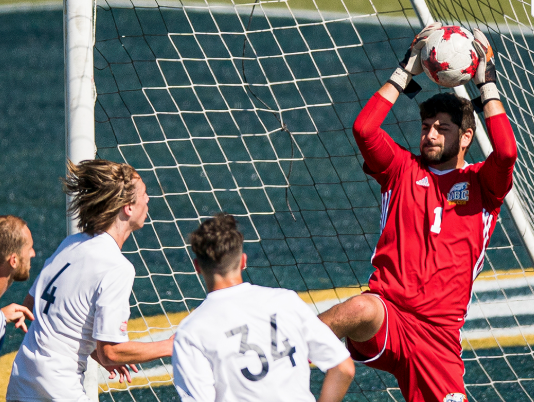 Richmond FC product and McMath grad Jason Roberts is in his second full season as starting goalkeeper for the UBC Thunderbirds.Richard Lam/UBC Athletics

Jason Roberts will look to continue his ascend up the Canada West record books when the UBC Thunderbirds men’s soccer team takes on the UVic Vikes in the Legends Cup series, starting tonight in the provincial capital.

The fifth-year Richmond goalkeeper now ranked fifth in conference play shutouts since 1992 with 16.5 after last week’s 5-0 win over Thompson Rivers. Roberts now has four on the season — having started all 11 games. He has a goals against average of 0.91. It’s the McMath grad’s second full season as the starter.

This week’s match-up has more than the Legends Cup rivalry on the line.

UBC (7-1-3) has maintained their first-place ranking atop the CW's Pacific division with 24 points while UVic (7-3-1) is just below occupying second spot compiling 22 points with just two-weeks left in the regular season.

“We always look forward to match ups with UVic and certainly now with the Legends Cup in place it adds a bit more for the overall bragging rights,” said UBC head coach Mike Mosher. “UVic have had a good season to date and certainly present some players we need to be aware of.  It will be a very competitive two game set.”

The series finale is Saturday 2 p.m. at Thunderbird Stadium.