Eleven-year-old Brooklyn Lee-Mcmeeken was one of the three who competed at the provincials
Apr 26, 2021 11:14 AM By: Alan Campbell 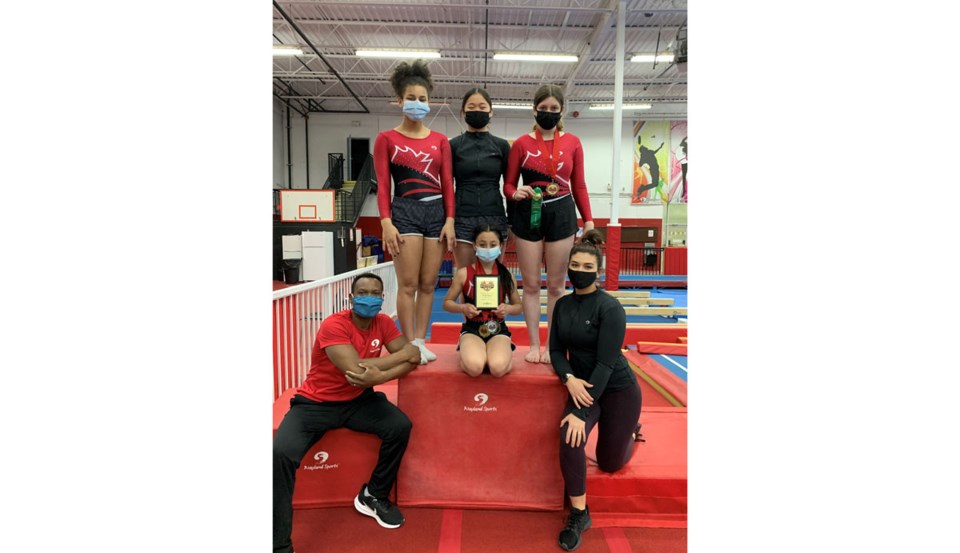 The recent Richmond-based winners from the BC Trampoline Championships, flanked by their coaches Innocent Eragbhe (left) and Ariana GomesRichmond Wayland photo

Brooklyn, despite being age 11, won the overall National Trampoline & Tumbling 2021 BC Championship award for the overall highest score out of everyone in the national level category.

Not only this, but she completed level 6 on all three events, which is the highest level she can be in right now due to her age.

To get there, Brooklyn placed first on tumbling and double mini trampoline placed second on trampoline within the level 6 category.

“She is only 11, so winning this award is truly remarkable considering there are others (males and females) that are 17+ years old in the competition,” said Ariana Gomes, assistant head coach and recreational program director for the club.

“Brooklyn was able to mobilize to the junior level in tumbling and double mini trampoline, which is also another huge accomplishment considering the youngest age to compete at this level is 13 years.”

Mobilizing to the junior level, added Gomes, gives Brooklyn a chance to eventually compete at world age groups to represent Team Canada in the sport of trampoline and tumbling gymnastics.

Mariama, meanwhile, placed first on double mini trampoline and second on tumbling. She also placed seventh overall in the championships.

Arden placed fifth on the double mini trampoline and third on tumbling.

“This past year has been quite difficult for gymnasts, so achieving these accomplishments, while handling the everyday challenges Covid-19 has brought to our community, is quite phenomenal,” added Gomes.