With growing numbers, city players hope to have their own dedicated courts
Jun 13, 2019 8:00 AM By: Mark Booth 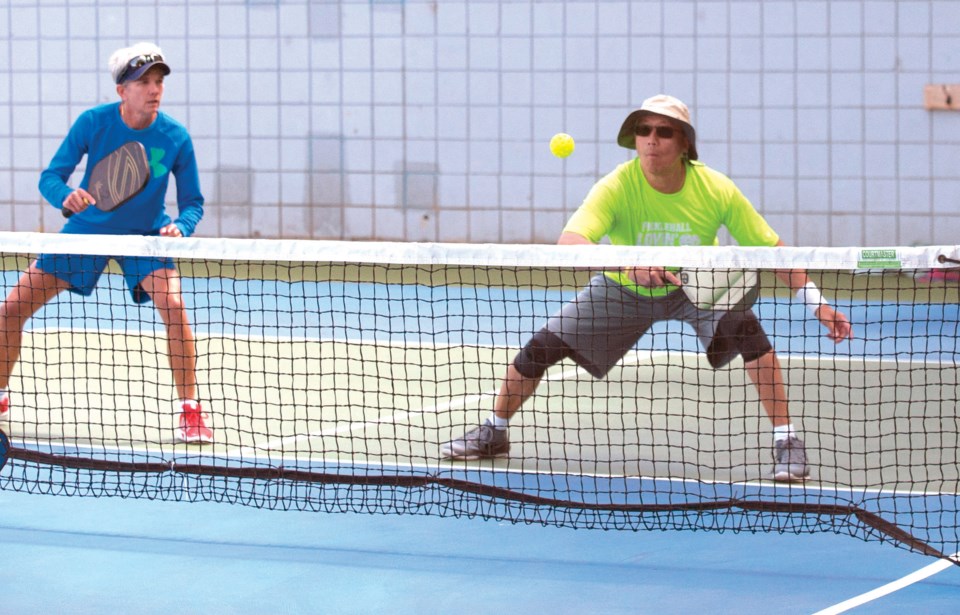 Richmond’s Peter Yap teamed up with Nori Nidoski to win the doubles title at last weekend’s Delta Pickleball Tournament. A newly formed association is working with the city for dedicated outdoor courts in Richmond, similar to this one in Ladner.Mark Booth

Pickleball is one of the fastest growing sports in North America and now a group of keen players in Richmond have formed their own association to help the game become even more established in the city.

“Pickleball can be played by players of all ages and abilities. It is popular among seniors as it can be less taxing physically when compared to other racquet sports,” explained Ed Wong. “The rules are simple and easy for beginners to learn. It can develop into a quick, fast-paced, competitive game for experienced players.”

Wong is part of an avid group that has created the Richmond Pickleball Association. It’s is still in its infant stages but already has about 100 players interested in becoming members.

Currently, the game is mostly played at community centres throughout the city, using portable nets. About 50 percent of the old lacrosse box located at South Arm Park has been dedicated to outdoor pickleball but is seldom used with no netting, fencing and a bumpy playing surface.

The association is hoping Richmond follows the lead of other nearby cities, such as Delta, that now has dedicated outdoor pickleball courts. At Memorial Park in Ladner, an old lacrosse box has been converted into three pristine courts.

“We are very lucky. Our mayor came out here during the election campaign and I gave him my pitch how this sport keeps people active and out of the hospital. He lived up to his promise and everyone was on board with it,” explained Peter Darvill of the Delta Pickleball Association.

“This is the healthiest sport and anybody can play it. You get four people of the same level and it’s a whole lot of fun.”

The Richmond Pickleball group has already had a preliminary discussion with the city. The initial step is identifying potential under-utilized tennis courts that could be converted over to pickleball. Eight pickleball courts could fit into two regulation size tennis courts.

“We will be reporting back to them with potential sites,” said Wong. “Basically (the city) said they will not be giving up any green space to do it.”

The association says dedicated courts will take the sport to the next level within the city. Lessons and promotional campaigns could be launched, tournaments planned and, most importantly, pickleball would have a permanent presence.

“It would give us consistency too,” added Sandra Sequeira, another keen player in the city. “You are sharing floor time with other user groups in community centres so it’s not available all the time.”

Darvill says the added exposure of their Memorial Park location has done wonders for the Delta membership.

“We use to be tucked away where nobody can see us. Now cars are driving by and slowing down to take look. They realize they can play this sport too so they pay their $20 (membership) and come out,” said Darvill. “It’s a very easy sport to get better at and it’s not a game where you need to be a superstar.”