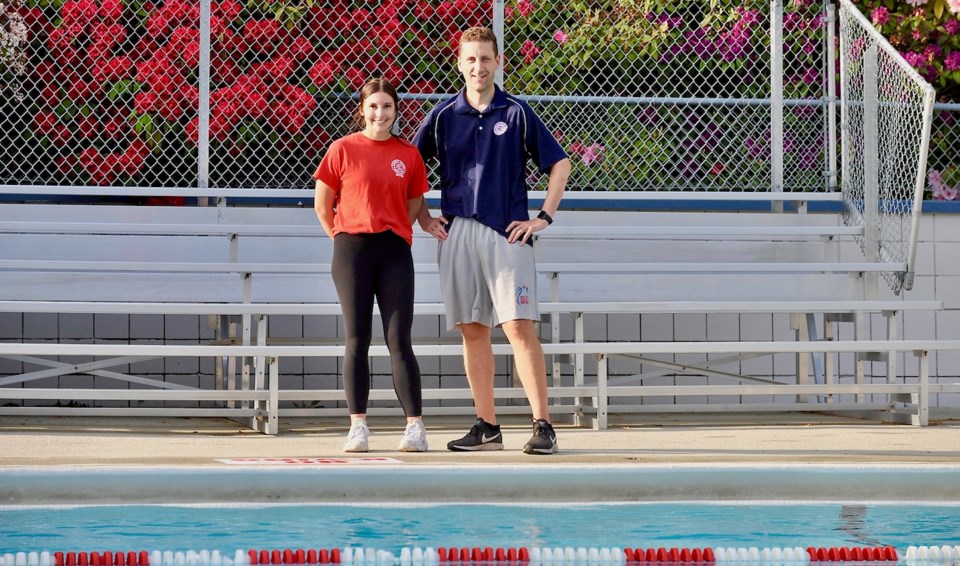 Richmond Kigoos head coach Emmy Obedkoff and president Chris Kennedy are looking forward to the club’s 60th season which gets started this weekend.

It was during his time as a teacher at McRoberts Secondary when Chris Kennedy first learned about the Richmond Kigoos. Now the summer swim club has been front and centre for his family over the last decade.

“I was never a competitive swimmer growing up but when I was teaching at McRoberts I saw so many great kids and families involved with the club. I knew I would want my family to be part of it,” reflected Kennedy.

He is now club president and getting ready for a big few weeks ahead as the club celebrates its 60th anniversary.

The season gets started with the annual Icebreaker Meet this weekend at the Steveston Outdoor Pool.

It kicks off a stretch of nine weeks of meets throughout Metro Vancouver — leading up to the Fraser South Regionals in early August and the year-end provincial championships two weeks later.

On June 15, the club will host an alumni meet, welcoming back generations of swimmers, followed by a banquet to wrap-up the day.

Registration remains steady and solid with 230 members — making the Kigoos (a First Nation word for fish that swims fast) one of the the largest summer swim clubs in the province.

Their success in no secret.

In an era where so many youth sports are focused on year-round training to achieve excellence, summer swimming is almost the exact opposite. There is an emphasis on fun and camaraderie. Meets are more like weekend camping adventures with a “city” of tents set-up around the competition pools.

“You have to appreciate it as summer focus with swimming rather than the other way around. It’s tough for some families who are so used to (the intensity) of other sports. This is more about kids doing multiple sports,” continued Kennedy.

“The parents really buy in too. Often there is a greater sense of loss with the parents when their kids stop swimming. This is their summer social network for three months every weekend. We have a lot of second and third generation of swimmers within the club. The Kigoos are kind of within the culture of Richmond.”

What also makes the club attractive is welcoming kids of all ages and abilities. Parents don’t need to worry about their child being an accomplished swimmer. There are no tryouts or even pressure to enter the weekend meets.

Emmy Obedkoff is in her fourth season as the club’s head coach.

“The question I get asked the most is ‘I heard about the Kigoos but my child isn’t very good.’ I always say we have a group for everybody. “Encourage to compete is one of the values but it’s fun first. One of the goals is to build the confidence of the kids to participate in the meets but it’s not mandatory,” explained Obedkoff.

“I was never the best swimmer. I played a lot of sports that I was way better at. I was just so passionate about swimming. I’m so lucky to be able to continue on with swimming.”