7 very positive things about the Vancouver Canucks this season

From Nils Höglander's rookie season to Brock Boeser's resurgence, there are some positive stories to tell about the Canucks.
Feb 2, 2021 1:30 PM By: Daniel Wagner 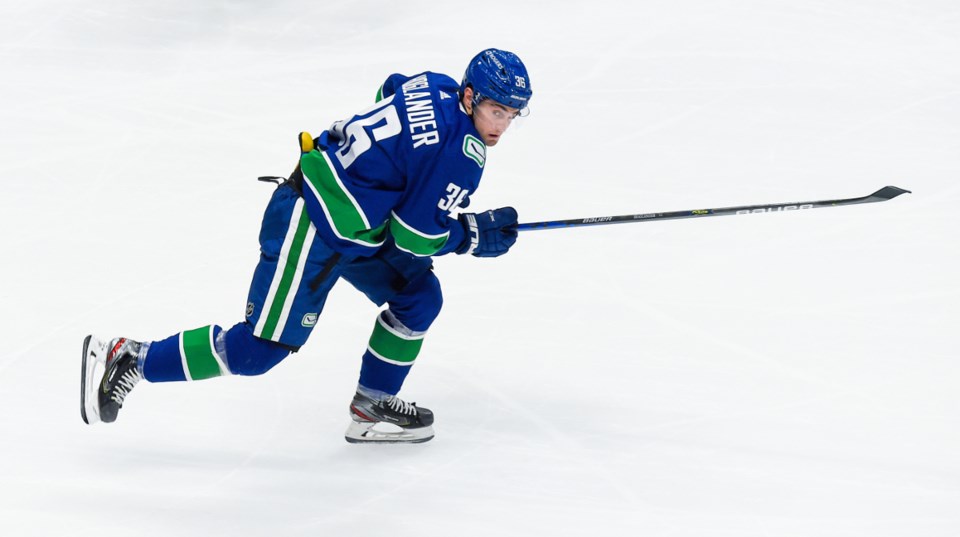 Nils Höglander has been one of the best stories of the 2020-21 season for the Vancouver Canucks.Bob Kronbauer / Vancouver is Awesome

There are a lot of negative things to say about the Vancouver Canucks right now. Their .500 record is fifth in the all-Canadian North Division, the once-dominant Lotto Line looks discombobulated, and they’re in the bad habit of giving up 40+ shots once every three games.

It’s not all bad, however, so let’s take a moment to accentuate the good. Here are seven things about the Canucks season that are actually positive.

The best story of the season for the Canucks so far has been the play of rookie winger Nils Höglander, who has impressed with both his skill and his tenacity.

Höglander’s ability to hold his own defensively has made him a great fit on the wing with Tanner Pearson and Bo Horvat, who get used primarily in a match-up role. On top of that, his offensive skill has added a new dimension to the Horvat line, making them the Canucks’ best line through the first few weeks of the season.

With three goals and six points in 12 games, Höglander is currently third in rookie scoring. His underlying statistics are even better: according to Natural Stat Trick, he’s first on the Canucks in expected goals percentage at 57.61%, which shows just how significantly the Canucks out-chance the opposition when he’s on the ice at 5-on-5.

2 | Tyler Motte is carrying the fourth line to respectability

This season, it took even fewer games to reach four goals, doing it in nine games, then adding a fifth goal in that same game for good measure. It’s not the goalscoring that has impressed the most when it comes to Motte — though it certainly doesn’t hurt — but the way he’s been able to help the Canucks fourth line actually control possession, something they were never able to do last season.

Behind Höglander, Horvat, and the heavily-sheltered Zack MacEwen, Motte is fourth among Canucks forwards in expected goals percentage at 52.26%. When Motte is on the ice, the Canucks allow very few high-danger chances and create plenty themselves. In other words, the fourth line has done a great job of protecting the slot with Motte on the ice and has done well at crashing the crease at the other end.

That stands in stark contrast to last season when the fourth line was repeatedly shelled and badly out-scored. So far this season, the Canucks have out-scored their opposition 8-to-4 at 5-on-5 with Motte on the ice.

3 | Brock Boeser is back

Who’s that tied with Connor McDavid for the league lead in goals scored? No big deal, it’s just Brock Boeser.

Less than a month into the 2020-21 season, Boeser is already halfway to his goal total from last year. His eight goals in 12 games put him on pace for 37 goals this season, a ridiculous pace that he surely can’t keep up all year, but who knows?

I’ll have more on Boeser getting his groove back in this week’s print edition of Vancouver is Awesome, or you can subscribe to the Pass it to Bulis newsletter to get the column in your inbox before it goes to print.

4 | The top line is still scoring

One of the most troubling aspects of the Canucks season is the play of their top line. For whatever reason, they’re just not playing like the Lotto Line of last season.

Despite those struggles, however, they’re still putting up points. As mentioned above, Boeser is leading the league in goalscoring. J.T. Miller is over a point-per-game, with 10 points in 9 games. Elias Pettersson, after a slow start, has five points in his last four games.

You can throw Quinn Hughes into this category as well, as he hasn’t played at his best, but still has 11 points in 12 games, which is tied for first in the NHL among defencemen.

Even when the Canucks’ top players are visibly struggling, they’re still scoring. That might be the most positive thing to take away from the start of the season for those who want to be optimistic about their playoff chances: if Hughes and the first line can put up this many points while struggling, how will they play when they find their games again?

5 | Nate Schmidt has been quietly quite good

When the Canucks acquired Nate Schmidt, fans were excited. After all, Schmidt was a top defenceman from one of the best teams in the NHL, a bonafide top-pairing defenceman whose puck-moving ability could be a gamechanger for the Canucks.

Some might be disappointed with the early returns for Schmidt, who hasn’t exactly dazzled at any point. But that’s never been Schmidt’s game. He’s not really the guy who goes end-to-end or makes a stunning stretch pass and his career-high in points is 36, not 40 or 50.

Instead, Schmidt has been as advertised: a solid puck-mover that keeps puck possession heading in the right direction. He currently leads all Canucks defencemen in corsi percentage and the Canucks have out-shot their opposition 103-to-94 and out-scored them 12-to-8 with Schmidt on the ice at 5-on-5.

I’ll be honest: I was skeptical about Jalen Chatfield. From what I had seen in previous preseasons and games in the AHL with the Utica Comets, I wasn’t sure that Chatfield had the poise with the puck needed to play against NHL competition, an opinion shared by some other close watchers of the Comets I polled.

His zero goals and 10 points in his last two seasons in the AHL certainly didn’t help his case — future NHLers ought to be able to score at least one goal in 82 games, right?

Through his first six games in the NHL, however, Chatfield has absolutely looked the part of an NHL-caliber defenceman. He’s looked more calm and composed with the puck on his stick in the NHL than he ever did in any of his games I saw in the AHL, and his skating has allowed him to match speeds with opposing forwards and keep a tight gap.

Witness this sequence from Chatfield on Jake Evans from Monday night’s game against the Montreal Canadiens: he takes away a passing lane and blocks a pass into the slot, then stays right with Evans, makes the read and picks off another pass, then springs a 3-on-2 rush the other way.

Chatfield hasn’t been perfect — that sequence above started with him mishandling a pass from Hughes that prolonged a shift in the defensive zone — but he’s shown that he can handle NHL minutes and prevent scoring chances. He currently leads the Canucks with the lowest rate of expected goals against.

7 | They’re not the Ottawa Senators

Here’s a positive thing about the Canucks: things could be a lot, lot worse.

Despite having the worst defence corps in the NHL, their coach doesn’t want to play Erik Brannstrom, who was the centrepiece of the blockbuster trade that sent Mark Stone to the Vegas Golden Knights. Brannstrom was supposed to be a franchise cornerstone; now his coach won’t even play him.

So yes, things aren’t great for the Canucks right now. But at the very least, they’re not the Senators.

A goaltending controversy is exactly what the Canucks need this season
Jan 28, 2021 1:46 PM