There are 800 species of native bees in B.C. but because of pesticides, habitat loss and disease, some of them are under threat
Apr 29, 2021 3:59 PM By: Maria Rantanen 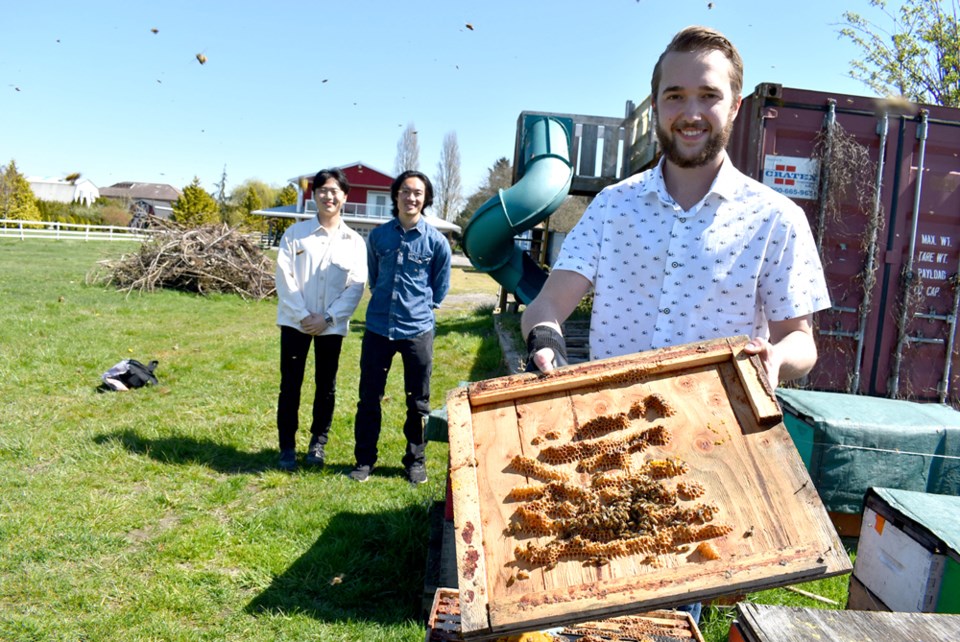 They are just in their early twenties but are in charge of a workforce of about seven million — bees that is.

And their mission is to change people’s mindset on these buzzing insects and appreciate how bees contribute to food production.

Mack Nielsen, who grew up in east Richmond, decided at the age of 17 to make bees his life’s work.

At 21, he and his friends, Michael Lau and Marcel Varona, are tending their beehives, sending them to farms to have them pollinate blueberry and cranberry fields, and, at the end of the season, shipping them off to Alberta to make 30 metric tonnes of clover honey, yielding about 30,000 jars of the sweet nectar which they market under their brand Jive Honey.

In four years, they have gone from tending 10 hives to having 750 hives. About 100 of them — with about a million bees — are kept at their No. 7 Road headquarters, Nielsen’s family farm where he grew up.

The rest are located on farmers’ fields to help pollinate them.

While they are self-described entrepreneurs, the three owners of Jive Honey also want to see the mindset around bees shift.

From a young age, Nielsen visited a local beekeeper in east Richmond who inspired him to get into the business. At the same time, he witnessed blueberry and cranberry farmers going bankrupt because they didn’t have bees to pollinate their fields, often killed off by pesticides that were supposed protect the plants.

The COVID-19 pandemic has wreaked more havoc on the honey bee industry making it harder to import bees across the border when they declined in population.

Varona said there’s sometimes a “disconnect” between honey and bees.

“We’re enjoying their product, we’re enjoying all the crops, the blueberries and cranberries, all these things that bees do for us, yet people don’t give respect to these animals that are doing it for us,” Varona said.

People, nature depend on bees

In fact, 75 per cent of crops — and one in three bites of food people take — depend on bees, explained Lora Morandin, who has been studying pollinators for 20 years and is currently the Western Canada program director of Pollinator Partnership Canada.

But natural environments are also highly dependent on bees — 90 per cent need pollinators for survival. Pesticides, habitat loss and disease, however, are causing bee populations to decline.

While honey bees, originally imported from Europe in 1622, are important for large-scale agriculture, there are 800 species of native bees in Canada that have adapted to local climates over thousands of years.

With their habitats changing and fewer native flowering plants, these are the bees that will disappear forever if their habitat changes significantly.

Because of climate change, some flowers are blooming earlier, throwing off the nectar-gathering schedule of some native bees.

Scientists have noticed a decline in bee populations with some listed as endangered, for example, the western bumblebee, bombus occidentalis, Morandin said.

But there are simple things people can do to help conserve bees, Morandin explained: plant wildflowers, don’t use pesticides — and mow less.

A messy looking garden instead of a “perfectly pristine” one might be better for bee conservation, Morandin said.

An old log or a pile of garden debris left over winter can provide hibernation space for native bees, she said.

“What do some wooded areas around your place look like, can we replicate that a little bit in our yards?” she added.

Morandin challenged people to think “just a little bit more deeply” about what they are planting to support pollinators.

“It is a change in our mindset – that (ornamental) tree looks cool, but, wait, what would have been here before, what have all these animals evolved with and what do we want to support,” she said.

She is encouraged by the fact that many companies and government agencies – like even some wastewater treatment plants – are planting a plethora of native flowering plants on their properties for pollinators to feed on.

She’d like to see native plants everywhere — even just along roadsides.

Jive Honey is donating 10 per cent of its profits to Pollinator Partnership Canada.