Owner tells police dog went berserk for no reason inside home on Sunday evening
Jun 8, 2016 9:35 AM By: Alan Campbell 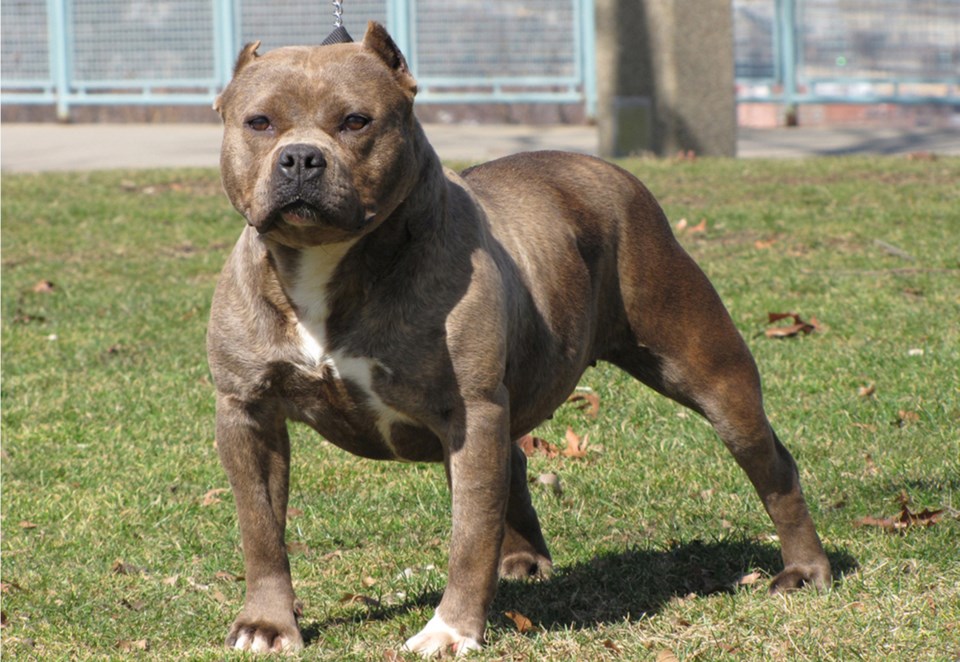 A pit-bull terrier, but not the one involved in the attack on a therapy horse. NOW FILES

A woman needed emergency facial surgery after being mauled by her friend’s pit-bull terrier on Sunday evening.

Shortly before 6:30 p.m., Richmond Mounties responded to a 9-1-1 call about a woman who had been attacked by a dog at a home in the 10,000 block of Dennis Crescent, near Steveston Highway and No. 4 Road.

According to police, the officers were unable to enter the home until the owner confined the dog to a kennel and muzzled it. However, it had been communicated to them that the victim had already left the home and was en route to hospital.

The dog was apparently at a “heightened state of aggression with boisterous barking and wild movements heard through the door to the residence,” police said.

After gaining entry, the officers were told that the victim — a 54 year-old woman — had suffered bites to her face and had been taken to hospital with non-life threatening injuries. She did, however, require emergency surgery.

Shortly after the incident, police followed up with the victim at Richmond Hospital.

They were told that the dog, a 65-pound, male pit-bull terrier, became unexpectedly aggressive towards the victim before mauling her face. The victim was visiting friends, who own the dog.

The dog was apprehended by City of Richmond bylaw officers pending an investigation. It’s now being held in isolation at the Richmond Animal Protection Society’s shelter on No. 5 Road.

“Animal calls are one of the most dangerous calls our officers can encounter,” said Richmond RCMP’s media spokesperson Cpl. Dennis Hwang.

“Knowing ahead of time that a dog has attacked another human being brings certain trepidation to the equation, especially when the body’s natural response is to travel away from danger.

“The temperament of this dog was, without exaggeration, off the charts. All of our officers were extremely cautious and the harm potential was exceedingly high. We were absolutely prepared for the worst.”

Hwang said it “took an inordinate amount of patience from our officers and (the bylaw officers). We were particularly impressed with the professionalism of the bylaw officer.

“They tried to calm the dog down many, many times, during the delicate time of transferring the dog to a holding facility. The transfer from the city’s vehicle to the holding facility’s entrance covered fewer than 50 metres, but took over an hour to complete.”

“On another note, one of the Richmond RCMP officers who responded to this call was also involved in a previous animal attack call, from December 30, 2015,” he said.

“This officer played a large role in rescuing twin sisters and their nephew from a horrifying dog attack. It illustrates that, from an officer’s perspective, each contact, each call, is unique… We continually assess and analyze every situation.”

City spokesperson Ted Townsend confirmed the dog is now in the custody of the city and an investigation is underway.

The dog’s fate, said Townsend, will depend on the outcome of the investigation.