Online shopping may seem so straightforward. Wherever you are, you can find your favourite retailer, order what you need and it’s sent directly to your door. Even grocery stores are joining the home delivery trend.
Apr 4, 2018 3:27 PM By: Alyse Kotyk 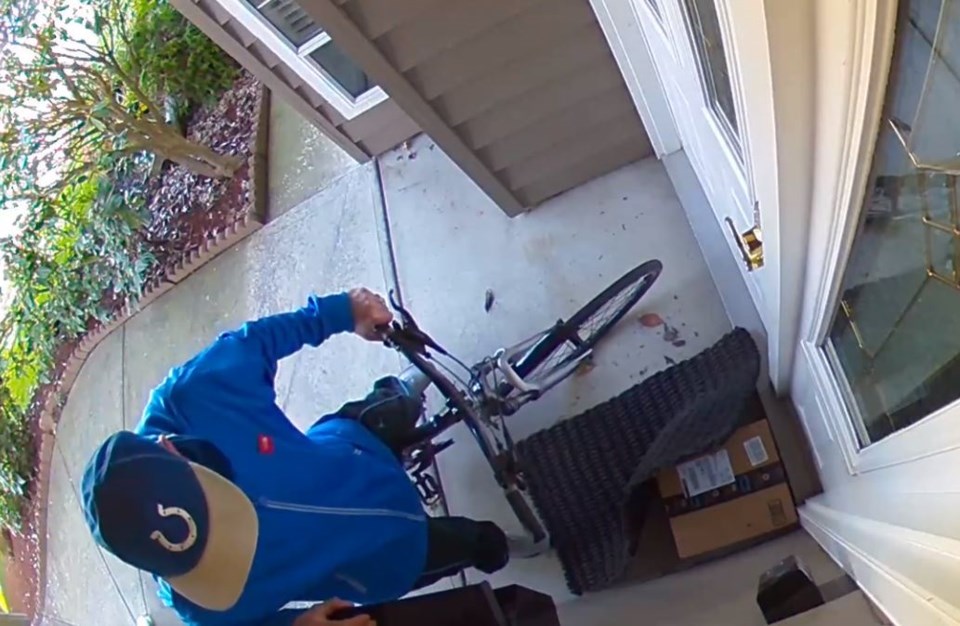 Online shopping may seem so straightforward. Wherever you are, you can find your favourite retailer, order what you need and it’s sent directly to your door. Even grocery stores are joining the home delivery trend.

But what happens when your package is left at your front door, unprotected and in view of passersby? One Richmond resident found out the hard way – and caught the whole incident on camera.

On Monday, a Richmond resident living on the 5000 block of Lackner Crescent caught a man on their security camera stealing an Amazon package from under their front mat. Video footage posted to Reddit shows the man, who was wearing a blue sweatshirt and an Indianapolis Colts hat, riding up to the front door on a bike. He uncovers the package under the mat, looks in the mailbox, then grabs the package, puts it on the back of his bike and rides away.

“We actually sent three officers there because we were led to believe the suspect would still be in the area,” Hwang told the Richmond News.

While the investigation is still ongoing, Hwang said that thanks to the quality of the security footage, his team has a good idea of who the suspect is.

Hwang said this isn't necessarily a trend in Richmond, even though a similar incident was caught on camera in December, where a suspect could be seen swiping a package off a front proch then fleeing in a red Corvette.

For those who aren’t dissuaded from ordering online in spite of thefts such as this one, Hwang recommends having packages delivered to a workplace, a friend’s home if you’re out of town or to a retailer’s locker where packages are received. He also recommends requiring a signature confirmation when the package is delivered.

But most importantly, if you catch a thief on camera, make sure to report it to police and don’t just post it to social media.

“If you suspect something, that’s what we do,” Hwang said. “We respond to these cases.”