Harold Cross still remembers the chill of the frigid Alaskan weather.
May 11, 2017 3:38 PM By: Philip Raphael 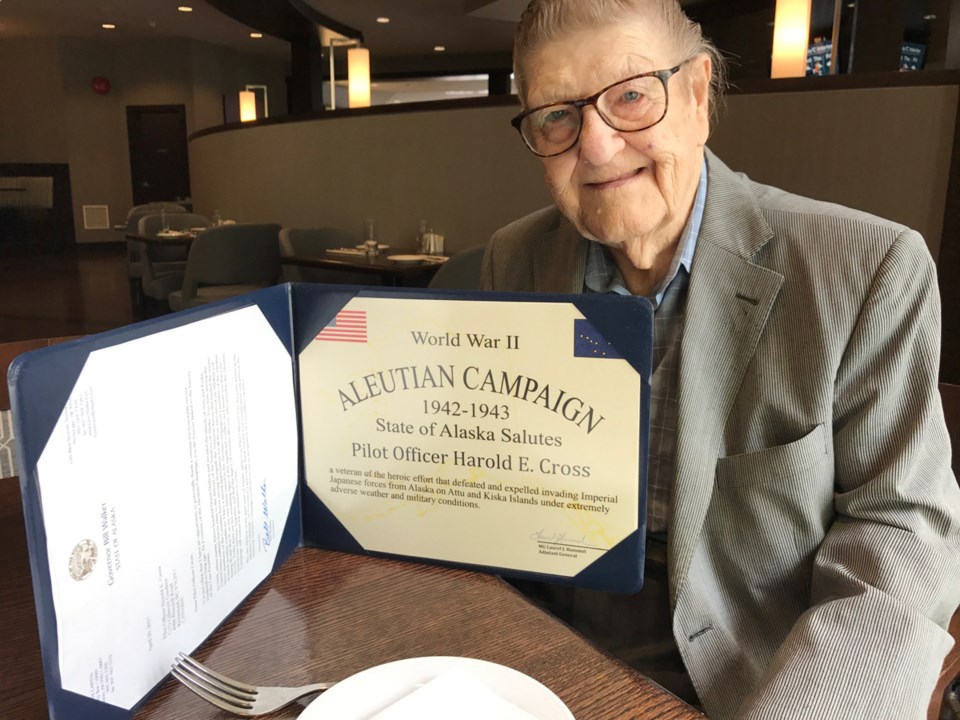 Richmond’s Harold Cross with his citation from the Alaskan Governor, thanking him for his service during the Aleutian Campaign during the Second World War. Photo by Philip Raphael/Richmond News.

It’s been 75 years, but he recalled the experience as if it was yesterday, emphasizing how the conditions were the biggest enemy during a little-known, Second World War battle he was involved with, that is finally getting the recognition it deserves.

The 96-year-old Richmond resident and veteran — who is the inspiration behind naming the restaurant at the local Sheraton Hotel (Harold’s Bistro & Bar) — was just a young aircraft frame mechanic serving in the RCAF when he was stationed in the Aleutian Islands. The mission of 111 Squadron that he belonged to was to discourage further encroachment by Japanese forces that had occupied the two easternmost islands in the 14-island archipelago that stretches into the Northern Pacific Ocean.

“It was mostly political. There was really no way the Japanese could have launched an attack on America from there, because, for one thing they didn’t have secure supply lines, like we did. And without that, they must have been in a pretty desperate state,” Cross said, sitting down for lunch at his regular table at Harold’s. “So, us being there was a way of telling the Japanese that they couldn’t come any further, not that they could, anyway.”

Cross’ squadron, one of seven Canadian groups sent to Alaska, was meant to bolster U.S. forces after the Japanese attacked Dutch Harbour on Amaknak Island on June 3, 1942.

This June 3 will commemorate the 75th anniversary of the Aleutian Campaign. And since Cross is the sole survivor from his squadron, he recently received a citation and medallion from the governor of Alaska.

Cross said he was grateful his group was being recognized for the role they played.

While they didn’t face a large amount of direct contact with Japanese during the 18 months or so stationed in Alaska, a good number of the sorties flown by pilots in the P-40 Kittyhawk fighters, Cross and the rest of the ground support crews worked on, were steeped in danger, mainly because of the severe weather conditions.

“When the Bearing Sea’s cold current meets the warm Pacific, there’s instant fog. And it’s right down to the ground,” Cross said, adding that is what claimed lives even before some of his squadron members got into proper action.

It came with the decision to fly seven of the Kittyhawk fighters and their support staff, packed into a DC3 cargo plane, to Umnaq Island.

“We made it in the DC3, but we had to scrape five of the fighters off the top of the mountains along the way,” he said. “Four ran smack into the mountainsides because of the poor visibility. One other, we never did find. He probably flew until he ran out of gas and went down in the sea.”

Conditions on the ground were not much better in a makeshift camp.

Cross’ squadron was inadequately supplied and only had their relatively lightweight, RCAF uniforms and no other heavy, cold weather gear. So, they borrowed overcoats from their American colleagues, making them an odd-looking crew with mismatched clothing.

“But we always wore our own hats,” Cross said with a laugh and a smile.

Strangely, there is no official, Canadian record of the Aleutian Campaign, Cross added.

“When we left, the Americans wanted to give us a medal for foreign service,” he said. “And the Canadian government actually considered it for overseas combat service. But ultimately, they said no.

“It was a strange situation.”

Cross has been invited to attend the commemoration in Alaska, but has decided against making the journey that, today, would take a number of hours by commercial airliner from Seattle.

“In my day, that took us three full days from Pat (Patricia) Bay Airport near Victoria,” he said. “So, I’ve been there and done that.

“It’s also against my religion — I never go back,” he quipped.