A wildlife charity is asking people to be careful when setting animal traps, after a young raccoon was found alive and hanging from a fence in central Richmond.
Oct 18, 2018 11:30 AM By: Alan Campbell 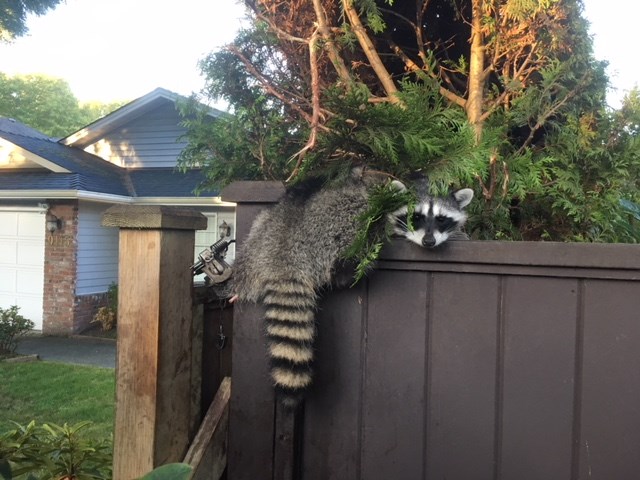 This raccoon was found by a City of Richmond worker in central Richmond with a leg trap attached. By the time animal rescue services got there, the creature was hanging from the fence. Photo submitted

A wildlife charity is asking people to be careful when setting animal traps, after a young raccoon was found alive and hanging from a fence in central Richmond.

The raccoon was found in an awful state on Jaskow Gate, close to Francis Road and Railway Avenue, on Tuesday morning by a City of Richmond worker.

The worker immediately contacted his supervisor who, in turn, alerted the Critter Care Wildlife Society and the RCMP.

Within an hour or so, the raccoon was taken down but was in such a bad condition that it had to be euthanized.

Now the Vancouver-based non-profit Fur-Bearers is calling on people having issues with wildlife to contact a reputable humane wildlife removal company, instead of setting their own traps.

“The trap was clearly on the young raccoon for some time, and the only thing holding his foot onto his body was skin,” said Adrian Nelson, of The Fur-Bearers.

“He had clearly tried to escape from the trap with traumatic results.”

Such “leg-hold traps” are legal for licensed trappers to place.

The city worker who found the raccoon said, although not being a fan of the creatures, he was “really disgusted” by what he witnessed.

“I felt really sorry for this little guy. I think people need to be informed how cruel this is,” said the worker.

“I don’t know where it encountered the trap, but it also could have been someone’s pet there or a child could have encountered that trap as well. (It’s) very irresponsible of someone to set that trap in a residential neighbourhood.”

The Fur-Bearers notes the traps can be purchased easily online by anyone and are often found at garage sales.

“The use of traps can be exceptionally dangerous not just for the targeted animal, but for any creature, including domestic cats and dogs or even children, who happen across the trap,” added Nelson.

“We advise anyone experiencing wildlife conflict to contact a reputable humane wildlife removal company, such as those certified through the BC SPCA’s AnimalKind program. The use of traps like these will just lead to suffering.”

Tips for residents to co-exist with wildlife can be found at TheFurBearers.com.