TransLink not considering English on its ads

Discrepancy exists between City of Richmond and TransLink justifications
May 19, 2017 8:42 AM By: Graeme Wood 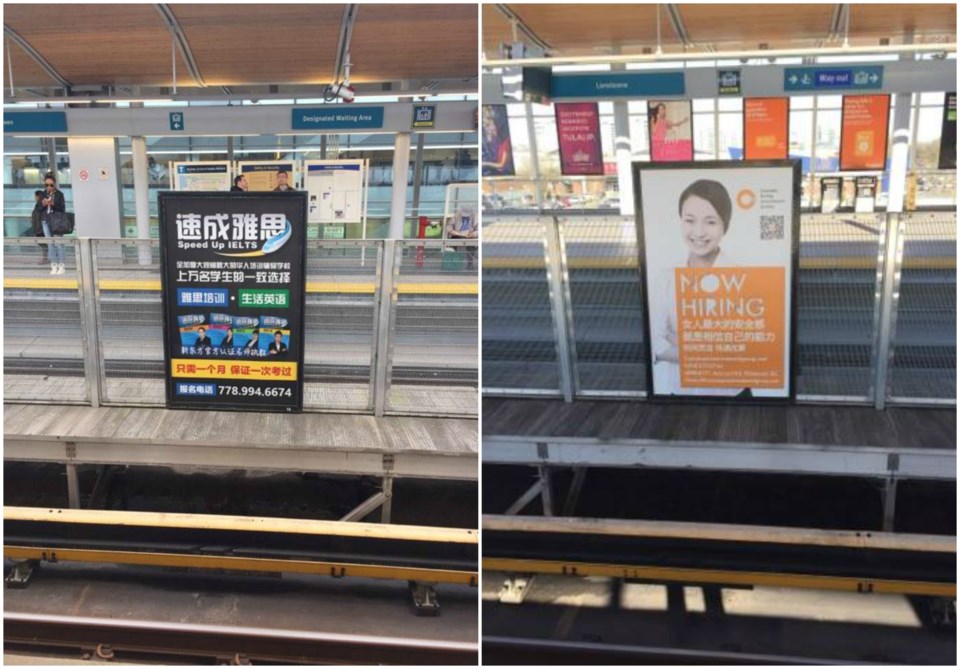 TransLink ads in Richmond are increasingly ending up in only Chinese. Community activist Kerry Starchuk considers a lack of policy to include a Canadian official language to be harmful to community harmony. She's asking for 50 per cent English on all ads.

Community activist Kerry Starchuk, who has already led a campaign against a rise in foreign-language business signs in Richmond, is now asking TransLink to consider English and/or French as a mandatory requirement on bus and transit station ads.

Starchuk contends that, much like business signs that have no English, TransLink ads create a sense of exclusion in the community.

“This form of advertising alienates and creates angst amongst local residents, newcomers and visitors who cannot understand what is being advertised,” argued Starchuk in front of TransLink’s board of directors on March 30.

Starchuk said the “exclusionary” ads fragment the community. Furthermore, she argues the increased prevalence of them is leading to a change in the “linguistic ambience” of Richmond, from where Canada’s official languages were the norm to one where French and English are eroding, and ethnic groups appear to be segregated.

Because of Richmond’s high rate of immigrants from China, the vast majority of the ads of concern are in Chinese. As such, buses and Canada Line stations often appear with Chinese-only ads.

Starchuk recommended TransLink mandate 50 per cent English in both wording and sizing on all ads.

She said this will allow more people to understand what is being communicated.

It would also reinforce TransLink’s commitment to the B.C. government’s policy to use English on government communications.

But marketing manager Angela Otto told Starchuk, via a letter, that TransLink cannot (or will not) regulate language on ads. TransLink’s position is predicated on a 2009 court decision that ruled limiting freedom of expression violates the Canadian Charter of Rights and Freedoms. The case arose when TransLink attempted to regulate politically-charged advocacy ads (unrelated to language).

TransLink’s argument is similar to that the City of Richmond made when it declined to regulate signage on private businesses — which Starchuk has campaigned on since 2012.

However, the city is of the opinion that it can regulate language in ads that appear on its own (publicly-owned) properties. In this case, it signed a new contract with Pattison Outdoor advertisers, in 2016, which stipulates English should be on all ads, alongside any chosen foreign language.

TransLink is also a public body and all the ads it endorses, via its own service providers, are also on publicly-owned properties.

It begs the question why the city felt it possible to regulate language on its property and TransLink still considers this not possible.

“As it is our property, we are able to establish the standards we desire for those bus shelters,” explained city spokesperson Ted Townsend.

Meanwhile, Otto only alluded to Richmond’s bylaw situation and didn’t address Richmond’s ad contract. Similarly, a TransLink spokesperson repeated to the News that regulating language on its ads is a Charter matter. As such, there are no plans to consider altering policy.

However, there is no proof even a municipal bylaw to regulate language would be against the Charter, considering a few jurisdictions in Canada have their own, unchallenged language bylaws for signage.

If challenged in court, the city (or TransLink, should it choose to have its own official language requirements) would need to demonstrate that mandatory English translations are a reasonable limit to freedom of expression that can be demonstrably justified, per Section 1 of the Charter. According to previous legal advice given to the city, justification may include proving foreign language signs are a threat to community harmony, which is exactly what Starchuk and her supporters contend.