Jennifer Hyland, the current officer-in-charge of the Ridge Meadows RCMP, says her focus is building an inclusive police force
Jan 7, 2021 9:50 AM By: Graeme Wood 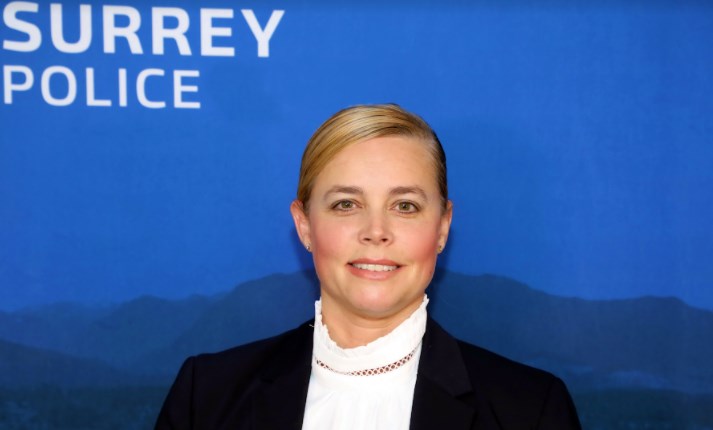 Hyland told Glacier Media her initial role will be the recruitment of officers to join the SPS, as it is anticipated hundreds of Surrey RCMP officers will leave the city to pursue their careers within the federal organization elsewhere once the new municipal force is fully formed.

From then on, Hyland said her objective is to maintain a force that promotes an inclusive and compassionate culture that should transcend to the public.

Given Surrey is one of the most diverse Canadian cities and Canadian police forces are faced with criticisms of systemic racism, Glacier Media asked Hyland if the latter is something she acknowledges and if so how will a new SPS address the matter.

“I’m not going to speak on behalf of any police force, for starters, but I can tell you myself and Chief Lipinski are going to be creating a culture where it is about so much more than the conversation about systemic racism,” said Hyland.

“Our culture is going to be one of inclusivity and respect, where gender and sexual harassment and bullying and any racist behaviour will not be welcome. The two of us are committed to that as we have been as police officers through our careers.”

When asked for her policing priorities, Hyland said it would be up to the Surrey Police Board, and by extension the public, to inform her.

“My job is to make sure we are hearing all the voices in Surrey and that we’re taking the time not to just listen but to understand why those areas are important to them,” said Hyland.

Hyland spoke to how the board will provide a different organizational direction than what she is used to at the RCMP.

“The idea of addressing quickly and efficiently community issues and concerns is much more cumbersome under the RCMP process than it would be under a police board-directed police force.”

However, she cited road safety and property crime as broad issues that should be key focus areas for the SPS.

Glacier Media asked Hyland about gang activity in Surrey granted Mayor Doug McCallum’s frequent public statements about violent crime (McCallum is the chair of the board). For instance, in 2019 McCallum told CTV News that shootings were spreading across the city and “people feel very, very unsafe in the community.”

“You need to balance off the needs of everybody in the community,” said Hyland, stating it is easy for the media or the public to talk about guns and gangs but the average citizen faces safety threats elsewhere.

Surrey’s police board has faced scrutiny when social media photos emerged showing board member Harley Chappell at a funeral with Hells Angels members.

Chappell, whose father is a former member of the White Rock Hells Angels chapter, subsequently told the Vancouver Sun on December 22 that he has never had any direct connections to what law enforcement classifies as an organized crime group.

When asked by the Sun if the Hells Angels is a criminal organization, Chappell said: “I can’t speak to what they are now. I don’t know.” He added: “I have no opinion on what the Hells Angels are now.”

Glacier Media asked Hyland if the Hells Angel is an organized crime group.

She answered, “There are classifications for organized crime and gangs and the Hells Angels would fit into a classification of that. But my focus …is on the behaviour and actions of individuals.”

Hyland said she wouldn’t comment on members of the board.

Despite widespread calls for a review of Chappell’s appointment, a January 4 letter from the Policing Security Branch of the Ministry of Public Safety and Solicitor General to Ivan Scott, a member of the Keep the RCMP in Surrey campaign, stated the Director of Police Services “has had an opportunity to talk with Mr. Chappell and supports his continued participation as a valued member of the Surrey Police Board.”

The letter stated strong boards reflect diversity of communities. Chappell is the only Indigenous member of the board and is the elected chief of the Semiahmoo First Nation.

Hyland started her policing career as an officer for the New Westminster Police Department in 1998. She transferred to the Surrey RCMP in 2001 and in 2006 shuffled across the Fraser River to the Serious Crimes Section at the Ridge Meadows detachment. In 2013, Hyland became the Inspector Operations Officer for the North Vancouver RCMP and doubled back to Ridge Meadows in that same role.

In early 2019 McCallum stated the SPS would be operational with “boots on the ground” by April 2021, however recent estimates indicate the force will not be fully operational until late 2022.

McCallum pledged a new police force during the 2018 election, which he won in a three-way race. However, the transition costs have been controversial, with the latest estimate put at close to $64 million, in addition to tens of millions of dollars in added annual operational costs. McCallum’s council coalition promised not to raise taxes to fund the transition but it tripled a $100 per property “parcel” tax in November to fund capital infrastructure projects, which the transition is classified as. General property tax rates have also been raised well above inflation (CPI).