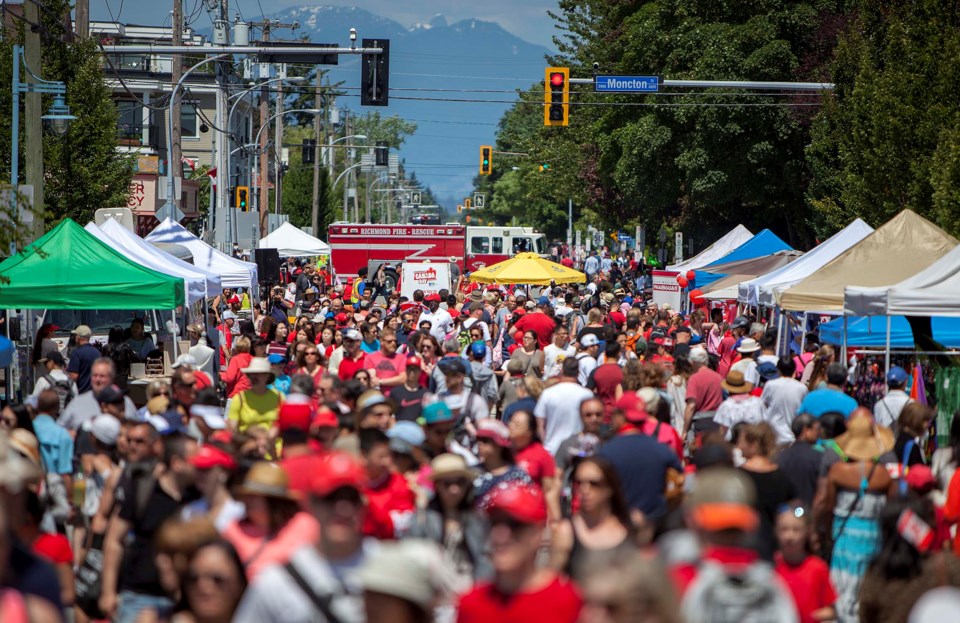 The numbers are still being counted but early estimates are pointing towards the biggest Canada Day crowd in history in Steveston on Saturday.

Educated guesses are putting the figure for the country’s 150th birthday party above the 100,000 mark, surpassing the previous record of just below that level in 2013.

With the sun shining on the ever popular 72nd Salmon Festival, which flowed into the city-run “Richmond Canada Day” event all around the village and waterfront, it made for a bumper day.

“We don’t have any final numbers yet and we’re still talking to some of the vendors, but I think it’s safe to say it was a record; it was definitely north of 100,000 people,” said City of Richmond spokesperson Ted Townsend.

“The previous record was approaching the 100,000 mark and I certainly think we exceeded that; simply by having the village activated, in addition to the Salmon Festival and the Riverside Village. There were line-ups everywhere.”

The reaction to the events, said Townsend, has been “very positive from everybody; people have been raving about the event.

“People loved the fact that it was spread out; this was the first time we’ve done it on this scale.”

Kirstine Dickson, co-chair of the Salmon Festival, had three words to sum up her side of the record-breaking Canada Day festivities.

“We changed things around this year and really opened it up, with the stage, the beer garden and the food trucks; it was amazing.

“Everybody came out; the vibe was electric and it flowed nicely into what the City of Richmond was doing.”

Dickson said a record-breaking sale of salmon — more than 3,000 portions were sold out early — was an indication of how big the crowd was.

“I’ve never seen Steveston so busy in all my years and never seen so many cars leaving after the fireworks.”

Dickson said there is at least one thing she’d like to tweak if she’s in charge again next year.

“If the city is going to have another big Canada Day event, we’re going to need a bit more help with volunteers, that was a challenge for us,” she added.

A year of festivals isn’t done yet, though, for the city, with the Maritime Festival in August, the two-day World Festival in September and the new Harvest Festival in the fall all still to come.

And this week, said Townsend, there’s a “huge plant sale” to finish off the Home & Native Bloom event at city hall plaza, with plants going for as little as $1.50. More information at RichmondCanada150.com.