Architects have a dream, project engineers need to figure out how to make it a reality and the secretary-treasurer lets them know if there’s money to pay for it.
Nov 11, 2020 5:00 PM By: Maria Rantanen 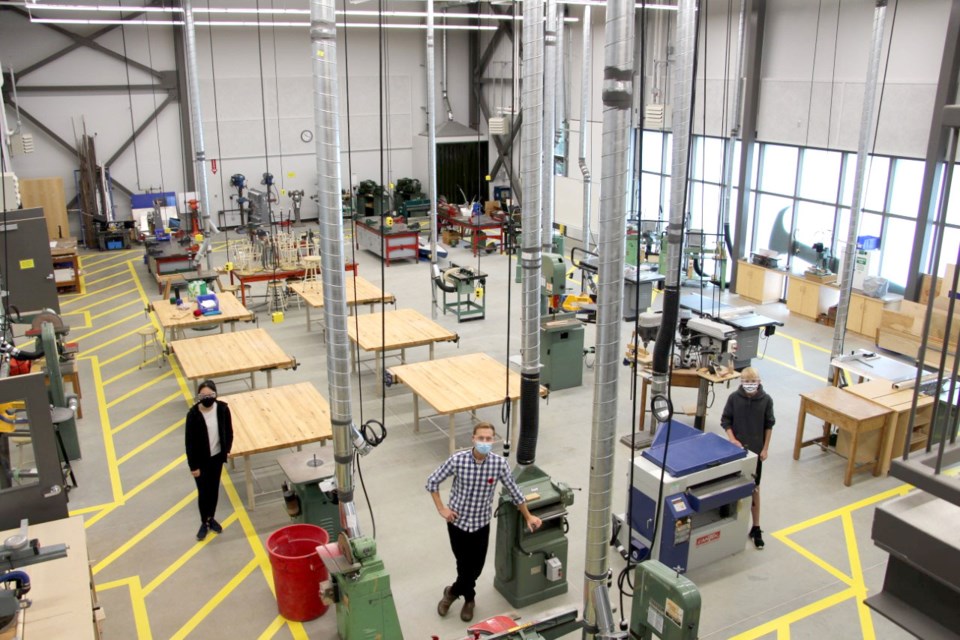 Tech teacher Benjamin Scoten (foreground) has been teaching in the new tech wing at Hugh Boyd secondary. He is joined by students Lucas Neuman (right) and Kaela Wong.Maya McKay/Ashley Moffatt

Architects have a dream, project engineers need to figure out how to make it a reality and the secretary-treasurer lets them know if there’s money to pay for it.

It’s a scenario that has been repeating itself in the Richmond School District as the seismic project team, led by executive director Frank Geyer, has been systematically planning and executing a dozen construction projects to make local schools earthquake-proof — and stretching dollars to get a few extra perks.

The new technology department at Hugh Boyd secondary is one such project. The old one, built in 1965, was scheduled to be shuttered in March and then demolished as the new one — with an open concept shop, a computer-assisted design (CAD) classroom and a makerspace (a collaborative tech-focused workspace) — opened up for learning.

Then the COVID-19 pandemic hit mid-March and all schools shut down to in-class instruction.

The pandemic delayed its use by several months, but as schools opened in September, the new tech wing, with a budget of $10 million, is gradually being phased in.

The makerspace and CAD lab were the first to be used, and in the second quarter (starting in late November), the wood- and metal shop will be used.

The seismic upgrade and renovations have had a positive impact on the school this fall, explained school district spokesperson David Sadler.

The main focus was a new tech wing for the secondary school, but the school was able to get some more renovations done at the same time, including new lockers, new flooring, better lighting and wider hallways.

New school facilities like the Hugh Boyd tech department need to strike a balance between form and function, but with a “heavy emphasis on function,” explained Geyer.

But the designers still managed to get some artwork into the shop — a hammer and rivet painted on the windows symbolize the hands-on learning, he explained.

The focus of technology education has always been learning hands-on skills like woodwork and metal work. But there has been a shift since the 1960s when the original Hugh Boyd tech wing was built.

In 2020, there is much more emphasis on design work in tech classes. Instead of all students building the same project out of one type of material — like a wooden spice rack — students now design their own projects using CAD programs and often mix various materials, like metal and wood, to create them.

Shop classes are more important than ever, explained Benjamin Scoten, tech education teacher at Hugh Boyd, because families are living in smaller houses and fewer kids are learning to use tools at home.

“People used to have houses with garages and tools,” Scoten said. He estimated 98 per cent of his students have never touched a tool in their life when they come to their first shop class.

The 1965 space had segregated areas for different trades, but the focus is now on more integrated spaces, explained Geyer. It will have the same trades, but they are being combined into one open-air space. There is also an adjacent computer-assisted design lab with windows looking out into the workshop. This integrates the design and work space so students can be working at different phases of their projects.

“If you get a new building, that’s the norm,” Geyer said.

Every makerspace is different in – in some schools, it’s just a nook or an extra space, while Hugh Boyd’s will be a complete room with light hand tools, a green screen and other equipment to allow for a wide variety of creative activities.

The makerspace will be a flexible space that can be accessed by any class that wants to delve into a hands-on technical project.