Staff at the Steveston Hotel are understood to be affected by a lockout notice issued by their employer
Apr 30, 2021 10:23 AM By: Alan Campbell 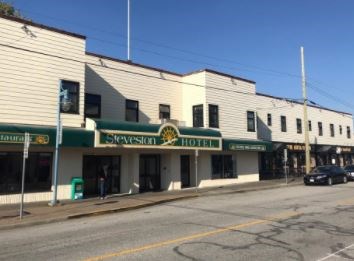 Hospitality workers in Richmond are among more than 1,200 across B.C. being “threatened” with a lockout notice by their employers, according to their union.

Staff at the Steveston Hotel, say Unite Here Local 40, have been issued a 72-hour lockout notice by Hospitality Industrial Relations (HIR) - an employer group representing 32 hotels, motels, and liquor stores across the province.

According to the union, more than 1,200 hospitality workers in 14 communities will be affected if the lockout goes into effect, adding that “hospitality employers are refusing to commit to retain their workers —mostly women and people of colour who served their hotels for years — to get through the COVID-19 crisis.”

The union is calling on HIR to jointly request mediation and “find a path forward to address the impact of the pandemic on hospitality workers and their employers.”

The lockout notice comes just after the provincial government announced an additional $25 million in “circuit breaker” grants to the hotel industry, on top of $120 million announced last week to aid the economic recovery of the tourism sector.

The union said that “without a commitment to return workers to their jobs when the COVID crisis is over, more hospitality workers will be terminated.

“Mass pandemic firings have been used as a threat to roll back decades of economic gains.”

Kevin Woolliams, spokesperson for HIR, said the organization was "preparing for bargaining with the union this afternoon" and that it hopes to "continue to use the collective bargaining process to find a settlement" like it has with all the other unions in the hospitality sector in the province.

The Richmond News has reached out to Steveston Hotel for comment.

The News reported in February how around 120 hotel workers at the Pacific Gateway Hotel near YVR, temporarily laid off last year, were permanently let go.

The hotel is currently being used by the federal government to quarantine passengers arriving at the airport.

A skeleton crew of workers is understood to be keeping the hotel running, while the News was told by the union last fall that Red Cross workers were looking after the quarantined hotel guests on behalf of the government.