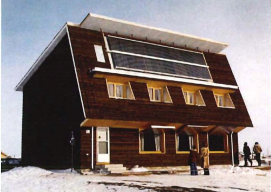 The first passive house was built in Saskatchewan in 1977.Photo courtesy passipedia.org

The City of Richmond is considering lowering permit fees and allowing more density for home builders who construct energy-efficient houses.

Council will look at incentives that can be offered to builders to build “passive houses” – homes that need minimal energy for heating and cooling - and other energy-efficient homes.

This is in anticipation of new building rules required by the province that all homes are built to high energy-efficient standards by 2025.

Because it’s about 10-per-cent more costly to build an energy-efficient home – materials are more expensive and consultation with energy specialists is needed – city staff have suggested allowing more density and reduced or waived building permit fees.

Builders who are constructing certified passive homes will have 100 per cent of their building permit fees waived.

Density bonusing would be 10 per cent of the floor area, to a maximum of 500 square feet.

Those building homes that comply with new provincial "step code" standards will have reduced fees as well.

Passive houses are built so they need very little energy to maintain 20 degrees Celsius even during winter months. They use enhanced insulation, reduce energy transfer through materials, use solar and other heat gains and are highly airtight.

The first inspiration for passive houses was a house built in 1977 in Regina, Sask. The first pilot passive homes were built in Germany in 1990.

B.C.’s first passive house was Austria House in Whistler, constructed for the 2010 Olympics.

So far in B.C., 34 certified Passive House projects have been completed with others awaiting certification.

City staff worked with Passive House Canada on researching and coming up with the incentive program.

The province is requiring homes are built according to a new energy “step code” by 2025, but passive house certification is a different process.

Part of the passive house motion will look at reducing building permit fees until 2025 for homebuilders that achieve “step 4” or “step 5.”

Richmond city council will look at the passive-house incentive program at next week’s general purposes meeting.