Client claims publishing her name and phone number was an ‘intimidation tactic’
Mar 1, 2021 5:10 PM By: Valerie Leung
Previous Next
1 / 1 A poor Google review resulted in a client's personal information allegedly published online by the business.Getty Images
Expand
Previous Next

A Richmondite is calling out a Richmond business for allegedly breaching B.C.’s privacy law after it published her personal information online in response to a negative review she had posted on Google late last year.

Emmalyn, who is using a pseudonym, called the act an “intimidation tactic” and suggested Richmond’s Skeye Optical Inc. was probably doing it to force her to take down her negative review.

She told the Richmond News she has seen other businesses do something similar.

Moreover, she says her review wasn’t even hostile towards the business. Rather, she was complaining about what she believed to be a “misleading Groupon deal.”

“My intentions for the review wasn’t about anything wrong with the business, and was only to let others know that their ‘buy one, get one free’ (Groupon deal) was misleading,” said Emmalyn.

“I posted the Google review in an honest and non-hostile way, stating my experience and left it at that.”

In January, Emmalyn received a notification of someone liking her review post and was surprised to also find that the business had replied to her review revealing her personal details.

“I saw the business’ response to my review from months ago, which I didn’t get a notification for. And when I actually clicked and looked at what they said, I noticed they disclosed my full name and my phone number in their response.”

According to a screenshot of the response, taken by Emmalyn, the optical business apologized for “any confusion” and then divulged her name and phone number, claiming it wanted to confirm she was the particular client they had in their system.

“I don’t believe that’s legal, and I believe it violates privacy laws in B.C.” 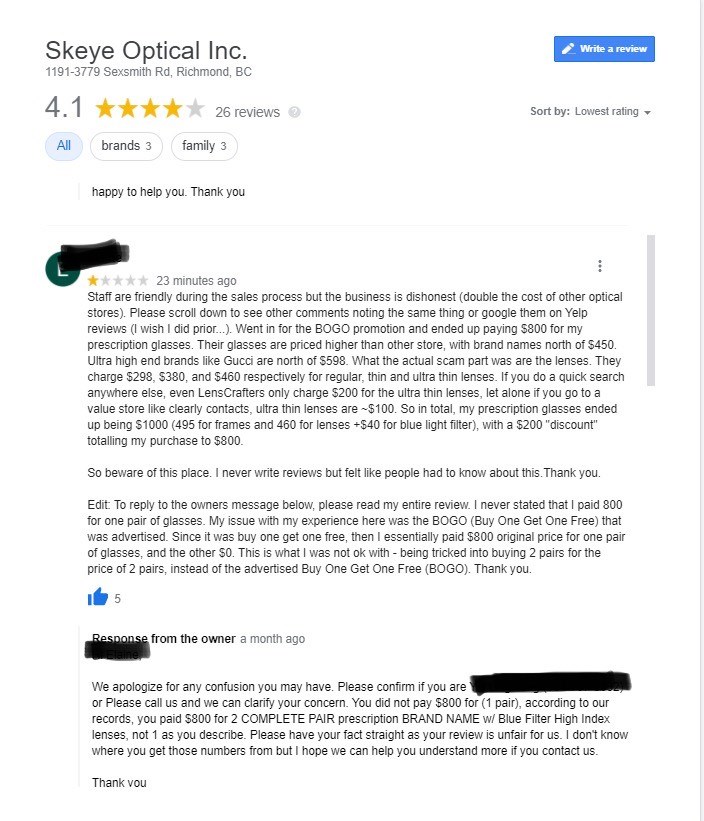 Richmond's Skeye Optical Inc. allegedly posted a client's information on Google after a negative review was given. By Google Review screenshot submitted

In order to have her personal information removed, Emmalyn deleted her initial negative review, which is what she suspects the company wanted her to do.

However, she left a second review which reads as follows: “I posted an honest, non-hostile review of this business and the owner retaliated by releasing my personal information as a response to my original review on Google without my consent. Thus, I had to delete my original review and (am) in the process of seeking legal advice.”

Underneath the second review, is a response: “Seriously! Please get your facts straight. We didn’t start all of this. You are welcome to call us to address your concerns.”

The Richmond News has repeatedly reached out to Skeye Optical Inc., but did not receive a response prior to publication.

According to Mike Larsen, co-chair of KPU’s Criminology Department, posting a client’s personal information is considered “totally outside the bounds of privacy law.”

“All businesses have clear obligations when it comes to this, and people need to be informed of information being posted; they have to consent to it, and it has to be reasonable.”

He added that complaints can be directed to the Office of the Information and Privacy Commissioner (OIPC) for B.C. where an investigation can be launched.

Michelle Mitchell, spokesperson for OIPC, said that while they cannot comment on particular cases, a business’ reputation can be affected if found to be breaching the privacy law.

“It’s important that businesses understand their privacy obligations, which is why we emphasize education through our PrivacyRight series and other programs,” said Mitchell.

According to Mitchell, the OIPC currently does not “have the ability to levy fines” if an organization breaks the privacy legislation, but OIPC is in discussion with the government about changing that.

Emmalyn said she will not be communicating with the business directly at all.

Rather, if communication is needed “it would be through legal.”