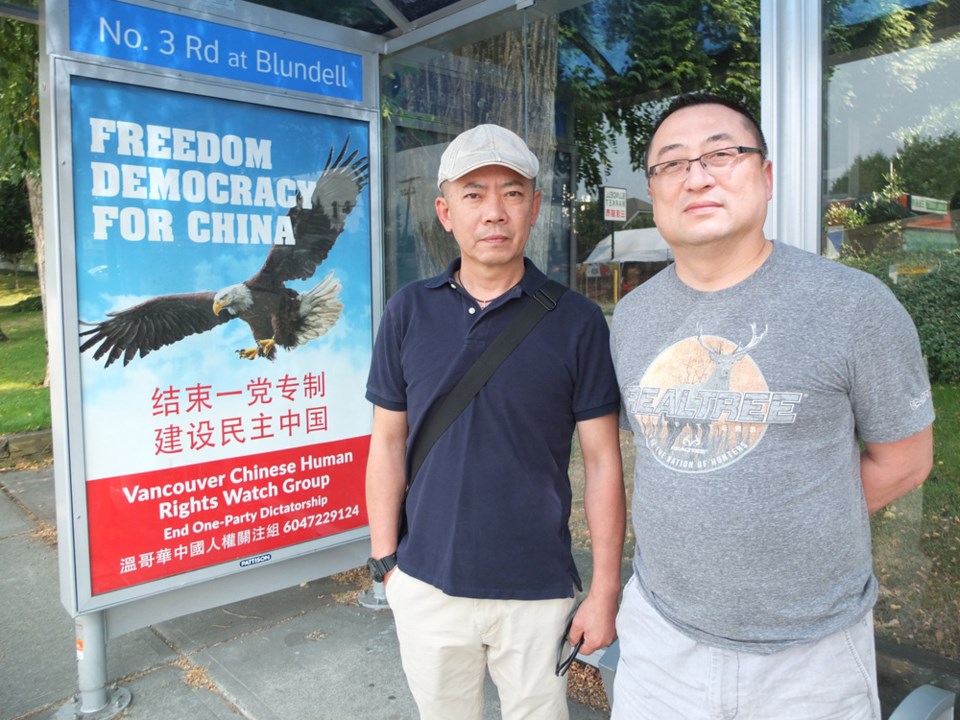 A bus stop billboard at No.3 and Blundell roads is turning heads, not because of any product it’s selling but because of the politics it’s advocating for.

The billboard reads “Freedom Democracy for China, End One-Party Dictatorship” in both English and Chinese, with the picture of a flying eagle.

These advertisements were put up by Vancouver Chinese Human Rights Watch Group, an advocacy group with 20 or so members, mostly comprising immigrants from mainland China, many living in Richmond.

“We want to make our small contribution to promoting democracy and freedom in China and show our support for people fighting for it inside China,” said Louis Huang, co-founder of the group, who moved to Richmond in 2002.

“We also hope the ads will encourage more Chinese-Canadians to step up and give their own voices on these issues because right now many are too afraid to do so.”

Huang said he and other members, who paid for the ad themselves, are very concerned about human rights and freedom of speech in China, especially after President Xi Jinping came to power.

“I think it has become worse in recent years. Rights lawyers have been detained, there’s increased oppression in Tibet and Xinjiang where people are sent to ‘re-education camps,’ there’s the lifelong tenure of Xi’s presidency, all show that,” said Huang.

Formed five years ago, the group has hosted multiple events to raise awareness about democracy in China, such as an annual memorial of the Tiananmen Square massacre of 1989; it has also held protests in front of the Chinese consulate in Vancouver for Liu Xiaobo, a human rights activist and Nobel Peace Prize winner who died in jail in 2017.

This is the first billboard Huang’s group has bought, and they plan to run more ad campaigns promoting human rights in China at locations where there is a large Chinese population.

“We have received a lot of phone calls from people showing their support,” said Huang.

“Many Chinese people are aware of the wrongdoings of the Chinese government, but they are too afraid to criticise it, even when they live overseas.

“Because they, more or less, still have connections in China; some have businesses there, or some have families, who can be at risk if they criticize China from abroad.”

Tieying Yang, a member of the group and a Richmond resident who moved here in 2015, said his wife and child, who are still living in China, received warnings from officials in China after he participated in a human rights protest in Vancouver.

“My family asked me to be more careful. I’m worried about them, but I also don’t want to stop pursuing and working for what I believe in. But many people would just step back,” said Yang.

What also concerns the group is Chinese officials’ influence on local Chinese organizations, which is at “a level that should be brought to the attention of Canadian politicians,” said Huang.

He said last year, a planned event in Richmond to commemorate the 60th anniversary of a campaign to purge alleged right-wing people from within the Communist Party of China and abroad, was disrupted by the Chinese consulate in Vancouver.

“The event organizer booked the venue of a local Chinese-Canadian organization, but the organization cancelled it at the last minute because of the Chinese consulate’s intervention. This is one example of how the Chinese government is influencing overseas Chinese groups,” said Huang.

“We moved to Canada for its democracy and freedom, but some organizations or group leaders here are not following those values for their own interests. We are trying our best to fight against this type of behaviour, for the good of China and Canada.”

The Chinese consulate in Vancouver didn’t respond to the Richmond News’ interview request.