Richmond animal shelter and control handed back to BC SPCA

The City of Richmond is switching its animal shelter and control contractor from no-kill charity RAPS back to the BC SPCA.
Nov 27, 2020 9:59 AM By: Alan Campbell 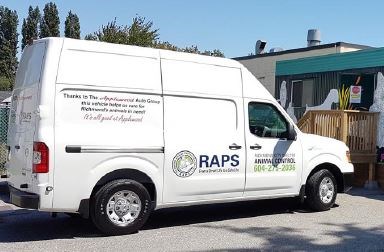 Part of the recent assistance for RAPS from the corporate world has been the donation of a new van from Applewood Nissan at the Richmond Auto Mall. Photo submitted

The City of Richmond is switching its animal shelter and control contractor from no-kill charity RAPS back to the BC SPCA.

The surprise announcement was made Friday morning, with RAPS (Regional Animal Protection Society) set to end its 13 years of service on Jan. 31 next year.

RAPS, a charity with a no-kill policy that was formerly called the Richmond Animal Protection Society before changing its name two years ago, took over the contract in 2007 from the BC SPCA after undercutting their bid.

Since then, RAPS has undergone massive changes in management and operations, including building its own state-of-the-art animal hospital, based at Richmond Auto Mall.

The city said it has now entered into an agreement with the BC SPCA for the operation of its animal shelter and animal control services commencing Feb. 1, 2021.

The agreement coincides with the start of construction of the new Richmond Animal Shelter to replace the existing facility at 12071 No. 5 Rd.

Because the new facility will be built on the same site, the existing shelter will close from next spring until construction is complete in two years.

The RAPS animal hospital, cat shelter and thrift stores are operated directly by the society and not a part of its contract with the city, therefore, they are not impacted by this agreement.

The Richmond News has reached out to RAPS for comment on how this will affect its operations.

“Continuity of care and service for stray, abandoned and in-need animals in our community is important, especially during this construction phase,” said Mayor Malcolm Brodie.

“The BC SPCA brings considerable experience, expertise and resources to the City in the area of humane and respectful animal welfare and the City looks forward to working with them.”

Under the agreement, the BC SPCA will receive and care for animals in Richmond and relocate them to its Vancouver facility at 1205 East 7th Avenue, where they will be processed and cared for while awaiting their owners or rehoming.

It will also continue to operate its Richmond Education and Adoption Centre at 7791 Steveston Highway.

Along with shelter services, the City agreement will see the province-wide organization take over animal control services in Richmond. Starting February 1, 2021, BC SPCA officers will provide animal control from 10 a.m. until 6 p.m. daily, maintaining current hours of service.

Contact information for animal services in the city remains unchanged at this time.

Anyone wishing to find a lost pet, report a dog off-leash or running at large, or injured or dead animals should continue to call RAPS at 604-275-2036. For enquiries related to animal regulations, dog licensing and fees, contact Community Bylaws at 604-276-4345.