Confusion is still reigning over the recent protest outside of the Richmond-based Regional Animal Protection Society (RAPS)’ hospital.
Oct 27, 2020 3:25 PM By: Alan Campbell 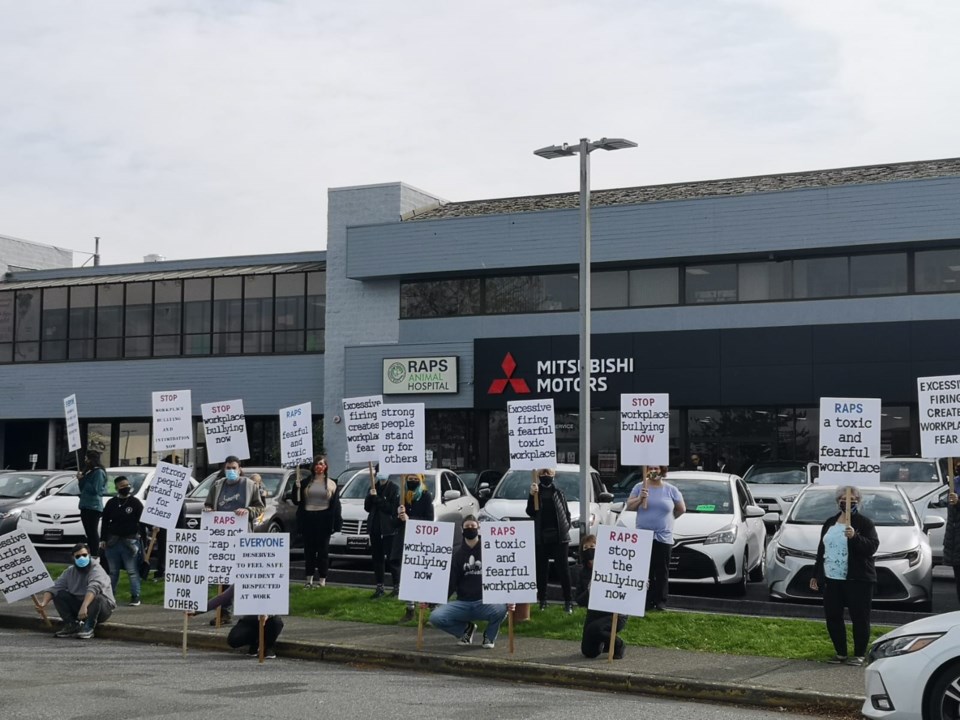 Former RAPS employees and volunteers protest workplace bullying and intimidation, which they said they experienced at the organization. Submitted photo

Confusion is still reigning over the recent protest outside of the Richmond-based Regional Animal Protection Society (RAPS)’ hospital.

The protest – over alleged workplace bullying – by around 25 people was apparently led by a former manager at RAPS Cat Sanctuary.

Believing that the former manager organized the protest and that she was a former CUPE 718 shop steward who is now actively involved with CUPE in its current collective bargaining with RAPS, the animal charity sent the union a cease and desist letter last week.

RAPS claimed the protest was “intended to pressure RAPS in negotiations for a Collective Agreement” and that the former manager has “posted publicly content about the negotiations, which we believe the union requested be kept confidential.

“The messages displayed during the picketing demonstration were false and in the circumstances, we believe they were made with malice for the purpose of pressuring and intimidating RAPS.”

The Richmond News has been unable to reach the union, despite several attempts.

However, the News understands CUPE 718’s president, Dal Benning has categorically denied the union has engaged in any illegal strikes or protests.

Also, Benning is believed to have told RAPS, in no uncertain terms, that the former manager in question “is not a current or former CUPE Local 718 member” and is not a representative of CUPE, nor is she involved in collective bargaining on behalf of the union.

The News reported 10 days ago how around 25 former employees, volunteers and their friends and family joined the silent protest outside RAPS’ animal hospital off Westminster Highway in the auto mall complex.

This week, of the alleged unjust firings, Lichtmann was open, in that there had been some staff let go of late.

But he said he has not heard one word from the union about any employee who was recently dismissed.

He said that, “had there been legitimate concerns about RAPS’ treatment of employees, or that these dismissals were not for just cause, the union would have been obliged to take up their case to be reinstated. It has not — on any of them.”