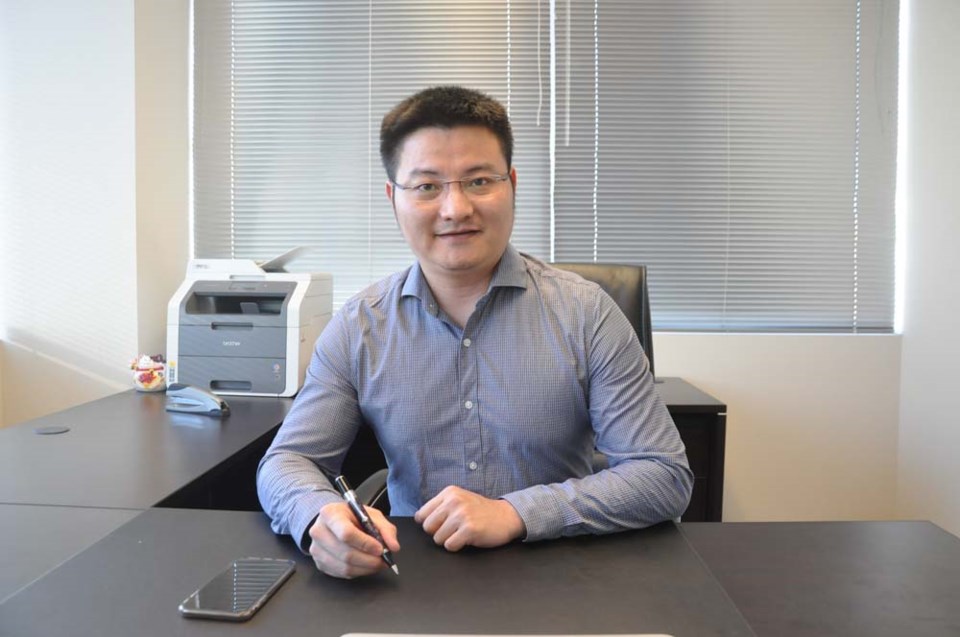 Richmond immigration agent Robert Hu said it is not realistic for parents of international students to go to school while raising a child alone in a foreign country. Daisy Xiong photo

More international students are coming to study in Richmond and many are accompanied by one of their parents.

According to the Richmond School District, international students are charged $16,425 per school year.

As a result of the high cost, some immigration ads are advising these parents to get enrolled in college, so that their children can receive free education in local public schools.

An idea promoted in one of the articles circulated on a Chinese language website called Wenba claims that parents can pay $30,000 and save $40,000.

The calculation is that if a parent spends $30,000 in tuition fees for themselves to get enrolled in a college for two years, and receives a three-year work visa after graduation, they can save up to around $40,000 on their child’s education over five years.

Children whose parent holds a study permit or work visa can go to local public schools for free.

“If you have more than one child, the profit doubles,” the author of the article wrote.

Robert Hu, president of Richmond-based Wellway Immigration, said he has recently received a lot of inquiries from people who want to be “parent students.”

“Many have read about it on Wechat or heard it from other immigration agencies, and are interested in taking that approach,” said Hu.

Those parents, added Hu, are usually in their 30s with a young child attending schools in Richmond – some only attend kindergartens.

The parents are not allowed to study or work in Canada, and their partner often works in the home country.

“Technically, parents of international students can save on their children's tuition fee by becoming a student themselves, as advertised by some other agencies,” said Hu.

“But money is not their biggest consideration.”

He explains that families who can afford to send their children to study here are often quite well off and don’t care much about saving $40,000.

“What they want is the permanent residency,” he said.

Under current immigration policy, full-time students of public post-secondary schools or certain programs of a private school can get a work permit after graduation.

They can then apply for permanent residency after gaining enough working experience.

“The parents here think, ‘I have to be here for my child’s education for many years anyway, why don’t I study something, get a job afterwards and immigrate to this country?” said Hu.

As nice as it looks, Hu, however, said this grand plan is far from being realistic.

“Those ads, I don’t want to say they are misleading, but they definitely oversimplify the process and the degree of difficulty,” he said.

He explains that most of those parents cannot get into college in the first place due to limited English aptitude.

Even if some do get enrolled, the responsibilities of taking care of a child alone in another country and studying at the same time just make it too challenging for them to graduate.

“Some might be able to graduate from some unknown private school, but the school won’t be qualified for the students to get a work visa after they graduate, not to mention to immigrate,” said Hu.

“So unless the parents already have a very good academic background and have strong English skills, it can be a waste of time and energy – for their immigration purpose at least.”