The Parkinson Superwalk — Canada’s largest fundraising event for the incurable degenerative disease — will come to Richmond on Sep.
Sep 3, 2013 3:06 PM By: Graeme Wood 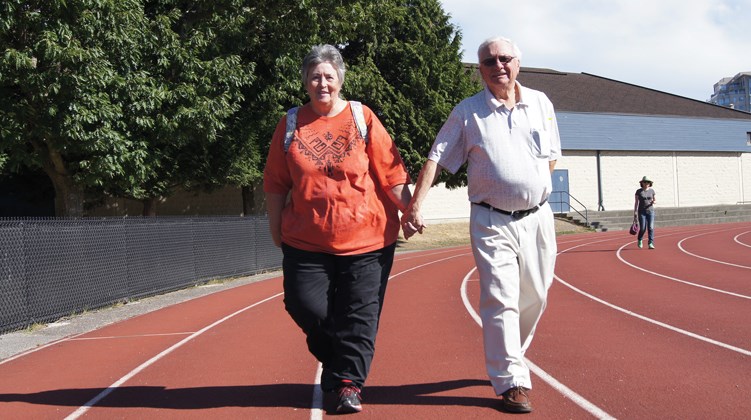 Graeme Wood/Special to the News Nancy and Joe Denofreo walk at Clement Track at Minoru Park. On Sept. 9, they will participate in Richmond’s first ever Parkinson’s Superwalk.

The Parkinson Superwalk — Canada’s largest fundraising event for the incurable degenerative disease — will come to Richmond on Sep. 9 at Minoru Park, thanks in large part to a selfless, dedicated Richmond couple who are facing the fight of their lives without backing down.

Fifty years ago, Joe and Nancy Denofreo set eyes on each other for the first time in Toronto. Young, ambitious and mindful of social issues the two met while working at a residential treatment centre for troubled youth.
They married in 1968, and moved to Richmond in 1973 where they adopted and raised three children. Nancy worked as a social worker and Joe, a union representative.

Fast forward to 2007 and the two would learn that Joe has Parkinson’s disease, an insidious neurological disease that affects 11,000 British Columbians and more than 100,000 Canadians. It often comes on late in one’s life, typically after age 50.

“I didn’t know anything about the disease when I was diagnosed,” said Joe. “The doctor said it would only get worse. …Of course, all those kinds of fears and anxieties ran through my head. But thanks to Nancy she’s done a lot of research and educated me.”

Parkinson’s takes away motor skills and for many it will take away their minds in later stages of the disease as dementia and mood disorders develop.

Joe had noticed a tremor develop years prior to the diagnosis. He now has difficulty walking and his voice is departing him. For all the pain it has caused him, Joe maintains a sense of humour, quipping that his slow movement is simply “the Parkinson’s shuffle.”

“You’re very dependent on drugs. I take drugs four times a day. At certain points in the day, I can feel the drugs wear off,” said Joe.

The problem, currently, is that they wear off and eventually stop working. Patients begin to experience involuntary movements and the disease fully takes over.

Fundraising events like the Superwalk are raising money to help fund scientific research to improve drug treatments and hopefully find a cure.

And in a time of need, instead of only taking from a social security system that they have invested their lives and careers in, the Denofreo’s will do what they’ve always done — give back.

Last year participants from Richmond had to go to Vancouver to attend the Superwalk. This year Nancy and others are organizing the event at Clement Track at 1 p.m.
“This year our support group thought it would be nicer if we did our own walk here. It seemed nicer to develop something in our own community,” said Nancy.

She acknowledges the numbers could be low given its the first year in Richmond. A turn-out of 20-30 people would make her happy.

“I hope they have one every year and people get involved. The only way we’re going to make inroads is through more research,” said Joe.

The Superwalk will take place in 20 communities across B.C. and is organized by the Parkinson’s Society of British Columbia. Last year, the society raised $600,000 and nationwide Superwalks raised a total of $3.2 million. For more information visit www.parkinson.bc.ca/SuperWalk.