Actor Larry Blum brings Blink & You Might Miss Me to River Rock Casino
Feb 8, 2012 2:00 AM By: Michelle Hopkins 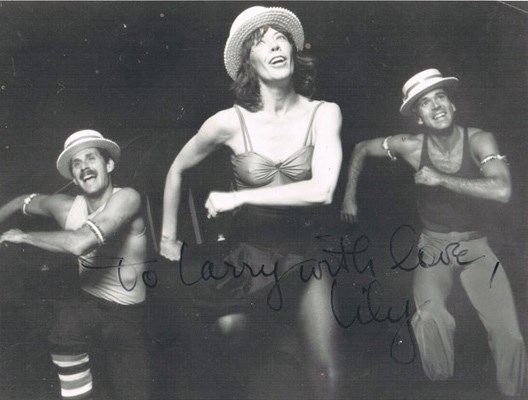 Blum dances along side Lily Tomlin in Chorus Line in 1978.Submitted

Have you ever wondered about the guys who escort the A-list stars onto the stage during Hollywood awards ceremonies? Or wondered if they could tell you which stars are nice and which are really nasty?

Blum is coming to Richmond to perform his one-man show, Blink & You Might Miss Me (USA), for five performances at the River Rock Casino Resort, opening Feb. 22. His show is part of the 2012 Chutzpah! Festival.

He weaves a tapestry of stories about Hollywood backstage dish.

Blum said its a chronicle of a Jewish boy in the Bronx obsessed with television.

Meryl Streep has a wicked sense of humour, she totally connects with you, engages you and looks you straight in the eyes as if you are the only one in the room, said Blum, from his home in Los Angeles.

He went on to say, About 12 years ago, I was escorting a star on stage at the Golden Globes I cant remember who now, but I asked my mother if she saw me on TV and she didnt even notice me. Hence, how I got the name for my show.

In his one-hour cabaret-style show, Blum shares the inside scoop about Hollywood and regales with stories, along with rare clips and photos from his long and wide-ranging career in television, stage and film.

Two years ago, I started writing stuff down and then Id go to open mics and audiences really responded well to my stories, he said. So, I went to my friend, television director Stan Zimmerman, and told him about my idea for a stand up show and he loved it.

He wanted to direct my show.

Hollywood loved it too.

Blum won best actor on Broadwayworld.com. He took his one-man repertoire to the 2011 Hollywood Fringe Festival as well as the San Francisco Fringe Festival, where it received rave reviews from the LA Weekly and other American publications.

I dreamed and fantasized about fame, fortune and notoriety since I was a kid, he said. Although I had no natural ability, I had drive and ambition.

When I was 14 to 18, I used to go to the taping of the Merv Griffin show, he said laughing. But my first obsession was Elizabeth Taylor.

Little did the young man know years later, he would dance for the launch of Elizabeth Taylors third fragrance.

I performed a big dance scene for the launch of her perfume I think I was 40 at the time, Blum said. I was meeting my idol. Can you imagine what it was like for me?

Meanwhile, Blum eventually received his teaching degree although he never taught because his love of Hollywood was too strong.

I remember I was kicking around New York and I ran into some Broadway chorus dancers (we called them gypsies then), and they asked me if I wanted to dance.

Blum was an eager, star-struck 22 year-old.

Over the ensuing years, Blum has been an on-camera escort and hes led countless actresses to the stage to accept an award, including Streep, Helen Mirren and Susan Lucci. Hes been on every major award ceremony.

His TV credits are numerous, including stints on Roseanne, The Golden Girls, and The Jeffersons. He has been seen on just about every daytime drama from The Young and the Restless and The Bold and the Beautiful to General Hospital.

Hes worked opposite George Clooney, Betty White, Ed Asner, and countless others. Blum said Clooney played his boss on Roseanne. To hear that story yes, you got it go to the show.

Ive got a really funny story about Betty White, but you have to come to the show to find out, he quipped.

Blum has, in fact, done it all.

Howard Blank, vice president of communications and entertainment with Great Canadian Gaming Corporation, was so impressed with Blums show that he asked him to perform here in Richmond.

It was the most amazing and creative show Ive ever seen and I see a lot of shows, said Blank. I had just flown to L.A. and a friend of mine invited me to Larrys one-man show.

Its his perspective as a Jewish guy growing up in the Bronx and life in Hollywood.

As for the performances at the River Rock, Blank said, We are taking this show up a notch and creating a red carpet and a Golden Globes theme in the theatre. There will be paparazzi and lots more.

Meanwhile, before he said his adieu, Blum laughed and said, I mean really who can say that Meryl Streep was on their arms Im living my boyhood dream.

The casino will donate $2 from each show ticket purchased to Variety: The Childrens Charity.