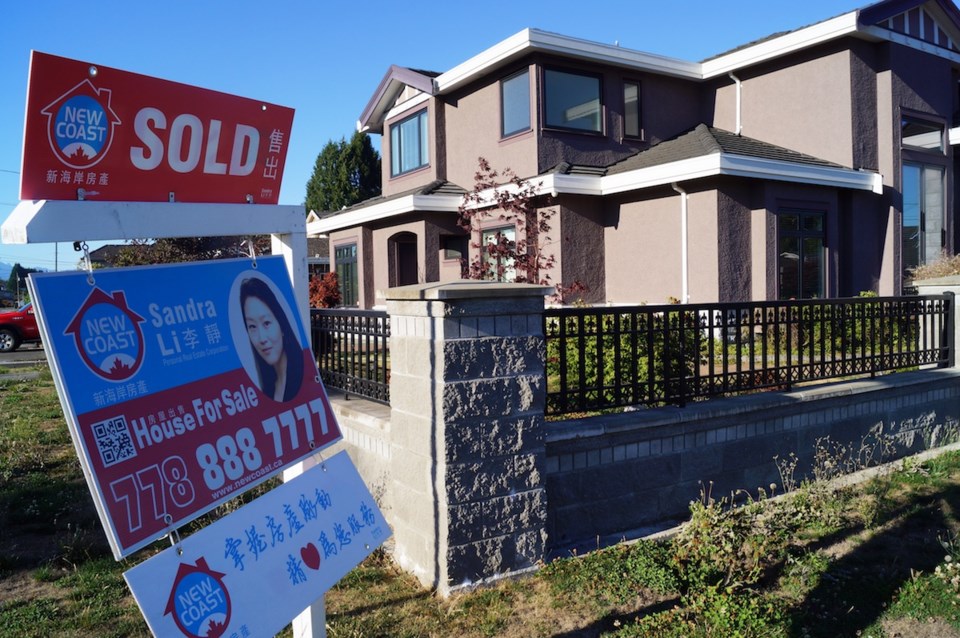 Many real estate signs in Richmond are directed toward Chinese-speaking clients only. Non-Chinese speaking residents have taken issue with the growing trend. August, 2015.

Nearly one in five homes in Richmond (18.2 per cent of purchases) were bought by foreigners, who spent $132 million in Richmond (19.1 per cent of the total sales), from June 10 to July 14, according to government data released Tuesday.

The release of data followed an announcement Monday whereby B.C. Finance Minister Mike de Jong introduced a new bill to tax foreign purchasers of Metro Vancouver residential properties, at a rate of 15 per cent. The tax will be enforced by verifying a buyer’s social insurance number on property transfer forms.

The tax revenue will be earmarked for housing-related projects.

And that revenue could be significant, considering foreigners accounted for about one in 10 home purchases, or $885 million worth of sold property in the region (10 per cent of the value of all transactions).

Foreigners spent about five per cent more on their transactions than did residents and Canadian citizens on Lulu Island.

On Monday de Jong contended, “While investment from outside Canada is only one factor driving price increases, it represents an additional source of pressure on a market struggling to build enough new homes to keep up. This additional tax on foreign purchases will help manage foreign demand while new homes are built to meet local needs.”

Economist Tom Davidoff, director of the UBC Centre for Urban Economics and Real Estate, called the tax a “bold” step, but questioned whether it would result in a correction of more than 15 per cent, at most, considering there’s a fixed supply of housing.

Davidoff and other leading local economists have called for the province to institute an extra annual property tax based on income, instead of nationality. Declared income would serve as a tax credit and retired Canadians would be exempt.

He said such a tax would discourage foreign speculation while incentivizing income earners to live in the city — something many believe is not happening, thus contributing to unaffordability.

Investigative journalist Ian Young of the South China Morning Post stated a similar tax is in place in Hong Kong. He said, via Twitter, that it would do little to curb foreign money from entering the Vancouver market, as that can be done by low-earning investor immigrants from Quebec.

NDP MLA David Eby said, via Twitter, the new tax would be “easy to evade” by setting up exempted Canadian shell companies to purchase real estate, for example.