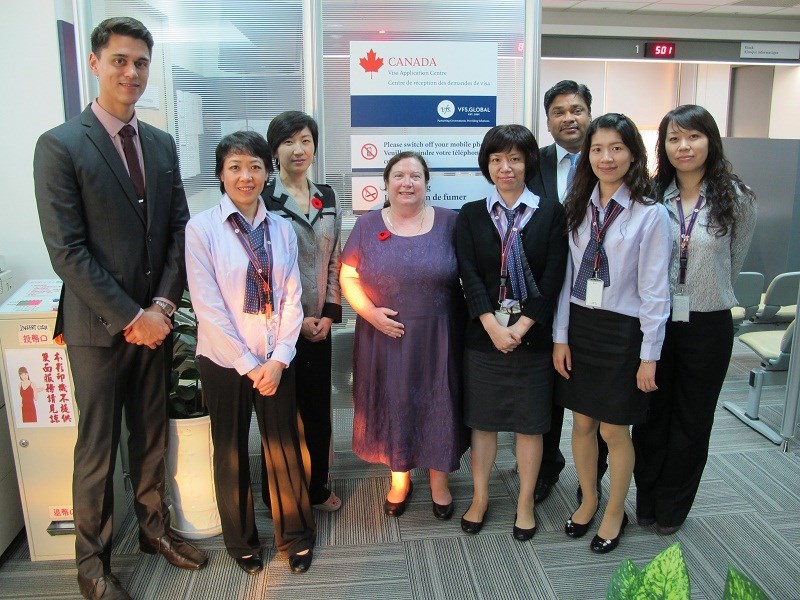 A VAC in the Trade Office in Taipei (CTOT). Photo by Canada.org.tw

Richmond can expect to see more Chinese visitors in 2018, after the federal government announced it will be expanding its Visa Application Centre (VAC) network in China.

According to Prime Minister Justin Trudeau’s government, 2018 will be the “Year of Canada-China Tourism.”

Chinese nationals are the number one overseas target of Tourism Richmond, which promotes the city’s shopping network, Chinese diaspora and green spaces. And according to Juwai.com, a company that assists Chinese nationals with international property listings, real estate tourism is also a booming sector.

The federal push for Chinese visitors could have additional spinoff effects in Richmond, such as an increase in applications for work permits and permanent residency, according to Richmond-based immigration consultant Ken Tin Lok Wong.

“With more contact to the country, then chances are they would consider moving over,” said Wong.

In Richmond, 53 per cent of residents identify as Chinese — more than in any other Canadian city. Of Richmond’s 15,245 “recent immigrants” (since 2011), 59 per cent were from mainland China.

“Expanding our Visa Application Centre network in China will make it easier for Chinese families, friends and tourists to visit Canada. As we approach the 2018 Canada-China Year of Tourism, I look forward to welcoming a record number of Chinese visitors to Canada,” said Hon. Bardish Chagger, Minister of Small Business and Tourism, via a news release.

Immigration, Refugees and Citizenship Canada (IRCC) noted the need for seven additional VACs to handle the more than 500,000 applications that have been received from China this year — a 15 per cent increase from 2016. To date, there are only five VACs in China, including one in Hong Kong.

Wong said the November announcement may be a “double-edged sword.”

On the one hand, the new offices offer a new door into Canada.

However, VACs are an additional, often unpublicized, screening process for Chinese visa applicants looking to eventually immigrate to Canada.

“The key message I’ve been getting from IRCC is that we are a very welcoming country. But what’s happening behind the scenes, who knows,” said Wong.

The government claims the new offices and a new payment system provides “improved flexibility” that “will make it easier for travellers to come to Canada, and by extension, open the door to new opportunities for economic and cultural exchange.”

To that end, Wong agrees more tourists could beget longer commitments to Canada.

Or, more VACs may simply mean a continued trend toward non-permanent residency, such as more foreign workers, international students and family members on long-term “super” visas. In Richmond, since 2006, non-permanent residents have risen from 1.3 per cent to 3.3 per cent of the population, while non-Canadians account for 17.5 per cent.

On the tourism side, Wong’s seeing an increasing trend from real estate firms to tie in sales to immigration consulting services.

But, “I must stress, investing into real estate is not something that makes you more eligible to apply for permanent residency,” he noted.