Mayor puts Steveston daycare on the 'spot' for Onni rezoning 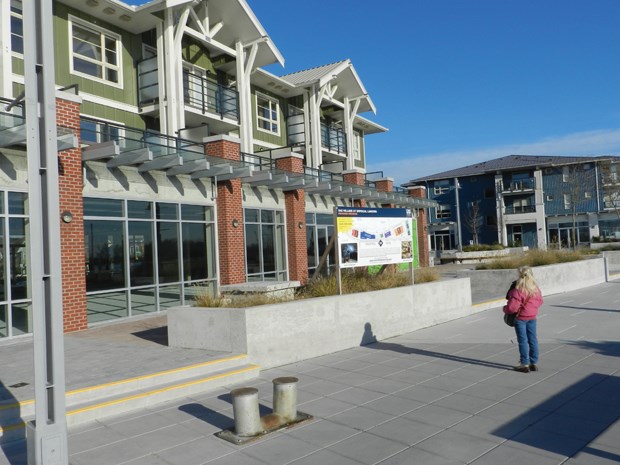 The long-running saga between the City of Richmond and developer Onni took an unexpected twist on Monday.

Last week, the Richmond News reported how Generation Daycare’s bid to relocate into one of Onni’s controversial and vacant Imperial Landing buildings was all but beaten by the current mixed maritime use (MMU) zoning at the Steveston waterfront site.

The daycare — which is being evicted on Sept. 30 from its current Trites Road location after its landlord applied to rezone to build homes — and its desperate parent customers were set to appeal in person to mayor and council at a special hearing next week.

However, at Monday afternoon’s general purposes committee at city hall, Mayor Malcolm Brodie brought forward a referral for city staff to look at the possibility of a “spot rezoning” at the Imperial Landing site, which will allow the daycare to move in.

The mayor’s referral, which was not on the committee’s agenda, was supported unanimously by council, including  Coun. Harold Steves, who last week was adamant he wouldn’t support any broad-based rezoning of the site, even if it cleared the way for the much-needed daycare.

Asked why he supported the mayor’s referral, given the depth of his opposition less than a week ago to the prospect of the daycare moving into Imperial Landing, Steves said his objection was based on any attempts to water down the entire site’s current mixed maritime use (MMU) zoning.

“This (referral) puts this in line with other industrial areas; I actually don’t know how (daycare provision) got left out of the (MMU) zoning in the first place?” Steves told the News. “I was quite delighted to support this, in fact, I seconded (the mayor’s referral). It will now be up to Onni to provide the daycare with a reasonable rate.

“However, (Onni) won’t be able to use this as a wedge to get the property rezoned for commercial.”

Spot rezoning means creating a special site-specific zoning that would vary from the existing site and/or area zoning to allow additional uses beyond what’s permitted in the existing zoning classification.

Hence, it would be intended for that specific site only and not be intended to be a precedent for any adjoining properties.

Onni and Richmond city council have been in dispute for around 10 years over the developer’s efforts to have the site rezoned from MMU to commercial/retail, despite Onni agreeing to the MMU zoning when it got permission to build condos on the upper floors.

City staff have also been asked to investigate other possible options in the area for the daycare and in the Onni complex itself, in addition to the proposed space.

“This would be fantastic if it happens,” said a surprised and excited Agnes Lewis, who owns and operates the daycare, along with husband Mike.

“The only thing is, I hope this can all be sorted out as quickly as possible, as Onni needs time to get the place up to spec before Sept. 30.”

The appeal hearing for the previous refusal of the daycare’s business licence at Imperial Landing will still go ahead on June 27 as planned, according to the city.

Generation’s owners recently had a business licence application turned down by the city for the site on the grounds it doesn’t comply with the zoning’s education component.

The Trites Road site where the daycare currently sits is scheduled for demolition in the fall, with an application to rezone from light industrial to residential received by city hall earlier this spring.

The daycare owners and one of their parent customers told the Richmond News last week how the bid to move into one of Onni’s vacant Imperial Landing properties is likely their last hope of staying in the area, as no other suitable locations can be found.