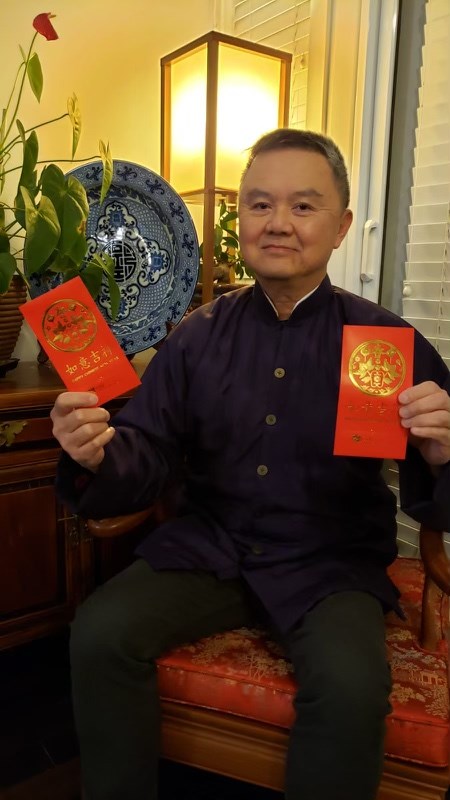 Richmond resident Francis Ang said red pockets have always been a symbol of good luck since he could remember.Joyce Ang/submitted

If there’s one thing children and unmarried people look forward to every Lunar New Year, it would be the lucky red pocket filled with money.

The lucky red pocket is one of the most recognizable symbol of the Asian celebration, and like its name it is a red envelope usually decorated with the Chinese character for luck or decorative drawings with the Chinese zodiac in gold.

“It’s a tradition passed down by Asian families for as long as I can remember,” said Ang.

The tradition of giving red pockets with money inside evolved from old Chinese folklore that warned of an evil spirit by the name of Sui who would enter the rooms of children on New Year’s Eve. It would pat the children’s head three times and the following morning the child would wake up with a terrible fever.

After learning about Sui, parents would often stay up on New Year’s Eve and light candles to protect their children from its touch. One year, a couple gave their child a coin to play with, hoping it would entertain the child and keep it awake so as to not be touched by Sui.

However, the child fell asleep just before midnight.

Sui entered the child’s room, blew out the candle and reached for the child, but the coin flashed suddenly and scared the spirit away to never return.

Over time, families tied eight coins together with red thread for luck. The red thread was eventually replaced with red envelopes.

Ang, who grew up in Malaysia, said the Lunar New Year was often his favourite time of year because of the red pocket.

“I’ve received red pockets for as long as I could remember when I was a kid, and I would be very excited because, in those days, we were quite poor. Lunar New Year was the only time we got money from our parents,” said Ang.

He told the Richmond News that when he lived in Malaysia, he and the other children in the same apartment complex would go to their neighbours and wish them a Happy Lunar New Year in hopes of receiving more red pockets.

“After we got our red pockets, we would take the money and sit in a corner and gamble,” Ang added.

“Chinese New Year was really the only time we could gamble as kids and our parents wouldn’t scold us.”

Kids apparently weren’t the only ones who gambled with their lucky money.

According to Ang, workers and employees in Asia often get red pockets from their employers at New Year and would gather during their breaks and make bets, too – hoping to win more from each other.

The money inside the red pocket is welcomed, but it’s not actually what brings luck. Rather, luck comes from the red envelope itself.

The colour red is the symbol of happiness, wealth and luck in Asian cultures hence most Lunar New Year decorations are often that colour.

Ang also told the News that red pockets are not only given during Lunar New Year, but also during “happy occasions” such as weddings, birthday, and graduations.

“Giving the red pocket is a sign of passing on good luck to others and wishing them happiness,” he said.

Because red pockets are considered “lucky” symbols, there are some rules when giving and receiving them.