The Richmond social services agency is disappointed the province is rolling out Low Wage Redress only for certain workers.
Apr 17, 2019 4:30 PM By: Megan Devlin 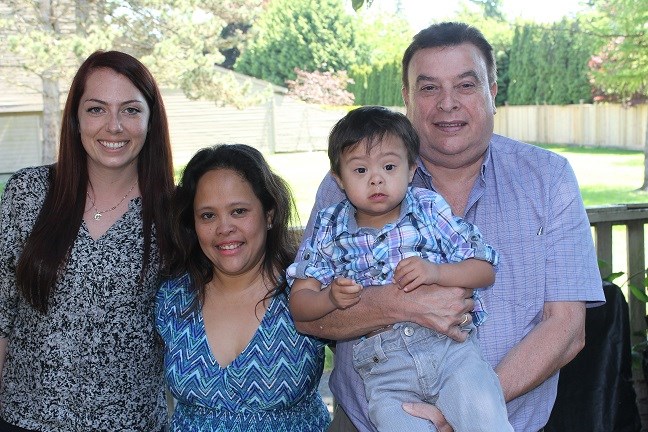 Bergen Rosebush (left) supports Richard Tino, who has Down Syndrome, and his family. She meets with the family at their home to offer strategies for Richard's parents to support his development and connects them things like health care, community resources and play groups. Photo courtesy of RSCL

A Richmond social agency that helps people with intellectual disabilities is crying foul over a decision by the provincial government to provide pay increases via Low Wage Redress only to union employees in the sector.

Richmond Society for Community Living, which employs both union and non-union workers, says the uneven pay increases will impact its ability to recruit and retain staff, which will ultimately affect the families who rely on their programs and services.

On April 1, a two per cent pay raise took effect for all workers in the sector. But unionized members are also getting an additional raise, called Low Wage Redress, which unions fought for during collective bargaining.

BCGEU is one of several unions that represent Richmond social service workers, and its president Stephanie Smith said unions were the ones who did the heavy lifting to get Low Wage Redress approved.

“It almost reminds me of (The Little Red Hen),” she said. “Where we ask does anybody want to help and everybody says no, and then the bread is made and everybody wants a slice.”

She added that in other sectors, like education and health care, benefits a union bargaining committee achieves do not automatically flow to non-unionized workers.

In social services, the province has awarded the same wage increases to union and non-union employees for the past 12 years. So RSCL expected their non-union workers to also receive Low Wage Redress as well. But they found out 11 days before the new fiscal year that wouldn’t be happening.

Since the agency relies on provincial funding and donations to deliver its services, it doesn’t have money to lift the wages of its non-union workers to match their peers. That means people doing the same job in Richmond will be paid differently.

“The discord that this is creating within our organization and also between organizations is problematic,” Barr said. “As you can imagine, it’s quite discouraging for our employees who are captured in this decision.”

The community social services sector is the lowest paid public sector, according to RSCL.

That was the basis of Low Wage Redress, which will give social service workers, on average (depending on their position), an additional four per cent wage on top of the two per cent increase everybody receives.

Now, non-union Richmond employees won’t be getting the same Low Wage Redress pay increase that union peers in Delta will.

Barr re-iterated that she wants to see people compensated based on the work they complete, not based on being a union member or not.

Smith, the union president, said she welcomes non-union workers to give her union a call to discuss joining.

The Richmond News has reached out to B.C.’s Minister of Finance for comment, but has not yet received a response.