A “This is NOT Consent” rally takes place on Saturday, Nov 24 at the Vancouver Art Gallery to protest victim blaming.
Nov 23, 2018 3:54 PM By: Elana Shepert 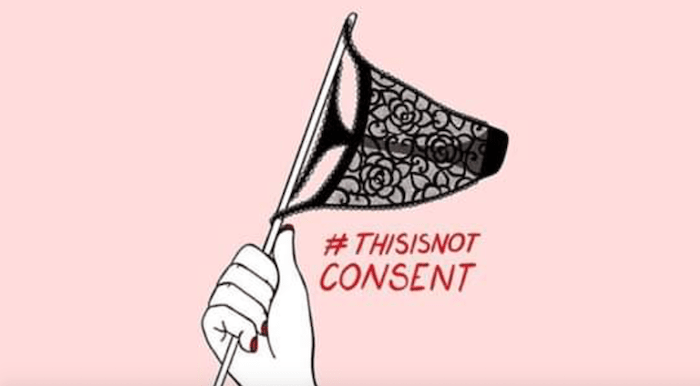 A “This is NOT Consent” rally takes place on Saturday, Nov 24 at the Vancouver Art Gallery to protest victim blaming.

Specifically, the event is being organized in protest of a trial that involved a seventeen-year-old rape survivor who took her own life after she was forced to show her thong as evidence in court.

Seventeen-year-old Rachel Way, a regular contributor to Vancouver Is Awesome, organized the rally after she heard story.

“I heard about the story and noticed that there wasn’t anything going on in Vancouver. I could really relate because I am the same age as the girl who took her life,” said Way.

“On Friday, November 22, people in Ireland will come together in solidarity for people who are victims of sexual assault and are blamed as a result. The rally offers a chance for the City of Vancouver to do the same.”

During the trial, seventeen-year-old Lindsay Armstrong was asked to hold up her lace thong, which led to her feeling humiliated and depressed. In response, thousands of women have used the hashtag #thisisnotconsent on Twitter in support of Lindsay.

“My goal is to have 100 people come out in support of Lindsay and other victims of assault. In addition, everyone should come and show support, whether you are male, female, or trans. Anyone can be a victim of assault and everyone deserves and needs support,” adds Way.

This is NOT Consent Rally Vancouver

Richmond exhibit to address violence against queer and people of colour bodies
Jan 15, 2021 7:00 AM