“Today is Day 22 of our hunger strike, and we are still waiting for the province to tell us how they plan to help hard-hit hotel workers.
Sep 1, 2020 12:41 PM By: Alan Campbell 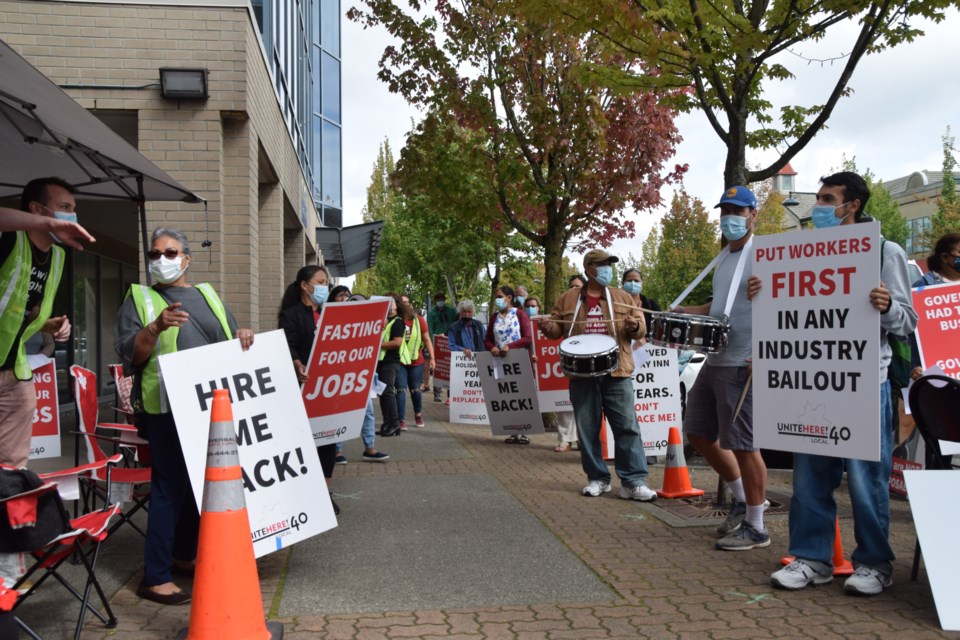 “Today is Day 22 of our hunger strike, and we are still waiting for the province to tell us how they plan to help hard-hit hotel workers.”

That’s the voice of Richmond’s Naden Abenes, a laid-off room attendant from the Hyatt Regency Vancouver, who fasted for five days during a hunger strike to protest the mass temporary lay-offs in her industry.

Abenes was joined Monday by dozens of other laid-off workers and community supporters in a protest outside the Surrey office of Labour Minister Harry Bains, where they and called on the minister to protect up to 50,000 laid-off workers at risk of permanently losing their jobs.

“The province helped employers delay severance payments until August 30, and during that time hotels like Pan Pacific, Shangri-La, Trump, and JW Marriott Parq permanently fired workers who were laid-off because of the pandemic,” added Abenes.

“That is just the tip of the iceberg. I’m worried that my hotel could do the same thing. We need a legal right to eventually go back to our pre-Covid jobs.”

The provincial government gave employers a 24-week extension of the provisions to delay severance payouts to workers, but without requiring them to rehire any of their laid-off workers in the future.

Non-union workers from the Pan Pacific Hotel spoke about the round of mass terminations they faced on the eve of the province’s Aug. 30 deadline.

“My co-workers and I didn’t hear a word from our hotel [during the pandemic] until they released a new employment contract for us to sign away our rights. Some of us refused to sign the contract,” said Nay Yon, a chef de partie who worked at Pan Pacific Hotel for 22 years.

“Management asked us to give up our rights to become casual workers and didn’t guarantee we would have our full-time hours back.

“On Friday evening [August 28], I got an email from my hotel that I was terminated. I spent all my life working for my hotel. My co-workers and I were willing to wait until business resumes so that we could return to our jobs.”

A provincial review of recall protections for hotel workers concluded on Aug. 20, but the province has yet to announce a decision on the matter.

Hotel workers began the hunger strike on the lawn of the BC Legislature on Aug. 10.

Last week, they moved their encampment to Tourism Minister Lisa Beare’s office in Maple Ridge and will return there this week.