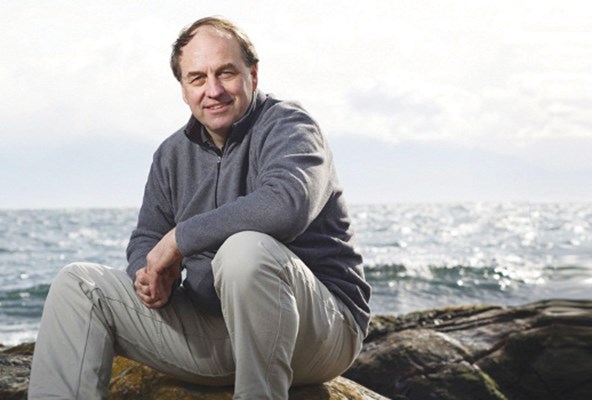 MLA Andrew Weaver is proposing to ban the sale of shark fins. Dec. 2, 2014

B.C. Green Party leader Andrew Weaver says his proposed bill to limit foreign ownership of protected farmland would not address much of the speculation occurring in Richmond.

“It doesn’t, and I acknowledge that,” Weaver told the Richmond News Tuesday.

Meanwhile, Weaver has proposed other measures to curb “the cash cow of speculative real estate.”

Mid-November marks six months since the city adopted its new bylaws that also set home plate restrictions (the amount of land that can be used for non-farm uses). Councillors said they intend to review the new bylaw. Prior to the new bylaw, it was a veritable Wild West of building permit applications for ostentatious homes, including one 41,000 square feet in size (which was denied by city staff).

In May, council turfed a city staff recommendation to go with the provincial guidelines and instead listened to farmland owners who asked for larger homes in what Mayor Malcolm Brodie called a compromise.

Then, staff noted in a report to council that large homes due to relaxed building restrictions were inflating farmland prices, imperiling legitimate farm activity.

In Richmond there are 1,274 ALR lots (from a total of 2,195 total lots) that are able to be developed with a home, as they have road access.

“To suggest that a nearly 10,794-square-foot dwelling, with a 10-car garage, a 25-seat theatre, tennis court, swimming pool, and 15 bedrooms or more is a ‘farmhouse’ is absurd,” stated RCA’s Jack Trovato.

“Richmond council can be quite aggressive with mega mansions. It falls squarely in their jurisdiction,” added Weaver.

He said his five-acre rule is based on other provincial foreign ownership restrictions for farms. In order to have an effect on Richmond’s small parcels, “extensive legislative knowledge” is required.

“It’s a recognition that we couldn’t do everything in this bill,” which largely addresses large swaths of land in Northern B.C. presently being scooped up by foreign interests.

“We’d have to have something different in Metro (Vancouver) and the Peninsula (Greater Victoria) where you have smaller parcels,” said Weaver.

He also conceded he doesn’t have much data to back up the bill he calls proactive.

But Weaver said data tracking should also include closer examinations of corporations such as bare trusts and numbered companies. Such titles mask beneficial ownership and can be used to avoid property transfer taxes.

The News reached out on Tuesday to Richmond-Queensborough Liberal MLA Jas Johal for comment. He did not return inquiries by deadline.