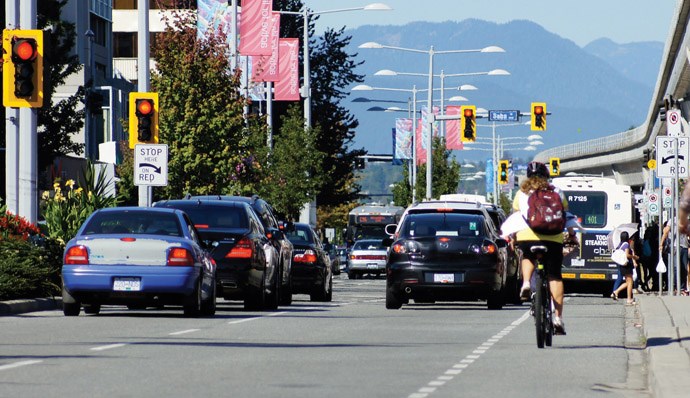 Is this a cycling city? It depends where you ride. Cruising along the dyke is lovely, but watch out for No. 3 Road. If cycling is to become a truly viable means of transportation in Richmond, a more comprehensive initiative is needed, according to many advocates. September, 2013.Graeme Wood

Scores of children and adults riding their bicycles peacefully on a gravel path atop a dyke; on one side a river or the ocean, the other farmland.
This may describe any rural town in the Netherlands or Richmond’s vast dyke network. But the second that recreational cyclist dismounts onto a busy urban street, the comparisons stop.
Whereas a city like Amsterdam — the world’s gold standard of commuter cycling — sees about 40 per cent of all commutes made by bicycle, Richmond wobbles along at under two per cent. The problem, say many cyclists, is Richmond lacks the commuter cycling infrastructure.
End-of-trip cycling facilities? Forget about it. Safety barriers for on-street bike lanes? Call Vancouver Mayor Gregor Robertson. Free bike-share programs? What are you smoking?
Indeed, while the above examples of commuter cycling infrastructure are currently lacking in Richmond, it’s an issue the city appears to be working on.
The question is, how long will it — and should it — take, especially in the wake of a cycling-related death on No. 5 Road earlier this month?
In its Official Community Plan (OCP), the city states the issue of active transportation — biking, walking and transit — must be addressed if Richmond is to become the sustainable, livable city it wants to be by 2041.
And while improvements are ongoing, many cyclists, including one of Richmond’s main cycling advocacy groups, HUB, say the city needs to do more.
“I think the city wants to be politically correct and do what they can. I think they can do more,” explained HUB’s Richmond chair, Derek Williams. “They do have a plan. However, if they can do it for 2041, then they can do it sooner. It just means they should focus more money on it.”

A plan for the future
The OCP is the pedalling force behind the city’s plans to move residents out of cars and onto bikes. In 2011, according to TransLink’s trip diary survey, 78 per cent of trips were made by car in Richmond/South Delta.
The OCP states that, by 2041, this number should be 49 per cent (in Richmond) and cycling should account for 10 per cent of all trips. In 2011, just 1.3 per cent of trips were made by bicycle in Richmond/South Delta.
Put simply, if you add the estimated 80,000 additional people who will live in Richmond by 2041 and everyone continues to drive at the current rate, things could get pretty hectic — if they aren’t already.
In order to achieve its goal, the OCP states it must encourage more bike trips while discouraging car trips, support cycling training programs, implement or improve bylaws pertaining to cycling safety, and improve the overall cycling culture of the city.
Infrastructure such as physical bike-lane barriers, cyclist priority traffic signals and shower and locker facilities for cyclists at major city destinations are some examples that will help the OCP goals.

Follow the money
While many of the cited OCP cycling improvements are nowhere near fruition presently, Williams says he has seen a slight increase in commuter cycling around Richmond.
“I would say it’s on the increase but we are limited with safe cycling routes; while there are more commuters we’re funneled onto only a few roads,” he said.
But, ultimately, Williams says the amount of funds being allocated to commuter cycling needs boosting.
Williams says about $8 million needs to be spent annually for the foreseeable future to make the city’s commuter cycling network world-class.
Joan Caravan, a transportation planner for the City of Richmond whose task is to oversee cycling infrastructure and programs said it’s difficult to determine exactly how much the city dedicates to improving cycling infrastructure.
Under the 2013 $16 million roads budget, $340,000 is dedicated to the Active Transportation Program, which builds pathways, manages programs and oversees related civic events.
However, half of that money comes from TransLink and the province. Furthermore, within the rest of the roads budget, many street improvements — such as the one on Nelson Road between Blundell Road and Westminster Highway — include measures to either install or improve bike lanes.
Caravan said some of the bike lanes being installed in Richmond, such as the bike route southbound on No. 3 Road at Firbridge Way, are a result of the city demanding them from condo developers.
Williams contends such policies, as well as under funding and the drawn out goals of the OCP, have resulted in the city’s commuter bike lanes being a disconnected jig-saw puzzle that discourages commuter cycling on a regular basis.
He notes northeast Richmond, such as the No. 5 Road and Cambie Road shopping centre, is particularly vacant of cycling infrastructure.
Richmond Mayor Malcolm Brodie said the city is focused on improving bike lanes and while there is “room for improvement” the city needs to budget where it sees appropriate.
“I think it’s unrealistic to say we’ll take money out of our regular budget. It takes time for these things to develop,” he said.

Time and issues
Williams says there is no excuse not to be able to cycle in Richmond, citing its convenience, flat terrain and tolerable weather.
Indeed, according to the OCP, 50 per cent of commutes in Richmond are within five kilometres, meaning a cyclist can get to the destination within 20 minutes. And while it rains more in Richmond than Amsterdam, there are more sunshine hours per month.
Williams represents HUB at the Richmond Active Transportation Committee, a public group that meets once a month at city hall from fall to spring to mostly discuss recreational and commuter cycling issues and events with city officials — Caravan being the main representative.
The issues are wide-ranging. Some are visible to the public, some not.
Graeme Bone, a Richmond resident who attended last Wednesday’s meeting, says residents should first focus on short cycling commutes like going to the store.
“As opposed to Bike-to-Work Week, I think Bike-to-the-Store Week would be more fitting,” said Bone.
According to TransLink, 85 per cent of commutes for shopping and personal business are accomplished by cars in Richmond and South Delta, indicating that some people may use transit to get to work but end their day with a drive to the grocery store.
Bone said he comes to meetings to voice his input on issues. And, like many cyclists, he still owns a car and uses it for long commutes to work in Vancouver to save time as he raises his baby.
Another topic was the new $3-million Railway Greenway, a project many cyclists are already lauding as a venue for improving bike culture in the city.
Both Williams and Caravan say the greenway will act as a stepping stone for new commuter cyclists.
“We’re trying to get people who are not riding now and provide some alternative places to ride on to get more comfortable with riding their bikes — kind of like a graduation,” explained Caravan.

Safety questioned
Safety is always a concern for cyclists, said Williams. Since 2008, an average of 58 cyclists have been injured in motor vehicle accidents in Richmond annually, according to ICBC.
At June’s meeting the committee recommended a lighter shade of green over a darker one for painted bike lanes at intersections. The lighter shade is better for night visibility and matches the City of Vancouver lanes.
One of the biggest safety concerns the Richmond News received from cyclists at the Canada Line bridge was the No.3 Road bike lane. Bumpy ramps, countless busy driveways, and blind spots from the Canada Line pillars are among some of the complaints.
Williams also points to the piecemeal network southbound on No.3 Road and the absence of a northbound lane in front of city hall to connect with Granville Avenue.
This puts cyclists in precarious positions, having to share the narrow and busy road as they connect to other bike routes.
TransLink notes that between 2008 and 2011 cycling commutes stayed level in Richmond and South Delta at 1.3 per cent while car commutes dropped from 81 to 78 per cent. In its mode share report the transit authority cited the Canada Line for the three per cent overall spike in transit use but made no mention of the line’s effect on bike use.

The Fast and the Furious
Perhaps one of the most contentious issues with commuter cyclists will come under the spotlight of media next week at the Union of B.C. Municipalities annual meeting.
The City of Victoria has requested the B.C. government lower its default city speed limit to 40 km/hr.
Williams is on board. Brodie is not.
“(Drivers) don’t adhere to the speed limits now. If you drive down No.1 Road or No. 2 Road at 50 km/hr you’re being passed.…On Steveston Highway, 80 km/hr is normal. It’s rarely enforced,” said Williams.
“I think we should continue with the 50 km/hr limit and vary speeds elsewhere,” said Brodie, noting some street speed limits can be lowered by the city on its own, like in Steveston Village. “I just can’t see a blanket reduction — there are so many circumstances. Should you have a 40 km/hr speed limit on our roads I think it (would be) an overgeneralization,” added Brodie.

Cycling’s future
The OCP map of the 2041 commuter cycling network indicates major roads like Francis, Gilbert, No. 2 and No. 5 will see changes such as shared bike lanes or “road diets” with dedicated bike lanes like the ones on Williams. Barriers on roads like Railway or Garden City may not be far off in the future as well.
As the OCP points out, the city has two choices: Get people out of their cars or face “rising trafﬁc congestion, a deterioration in air quality and an omnipresence of cars in every neighbourhood.”
Moving forward, the city will likely continue to usher in developers who will be asked to fund bike networks along the streets. Eventually, says Caravan, the network will link up.
Meanwhile, the challenge for Williams and his fellow HUB members will be to expand the culture of cycling from the dyke to the street.
“As long as it’s too easy to drive, they will drive.”