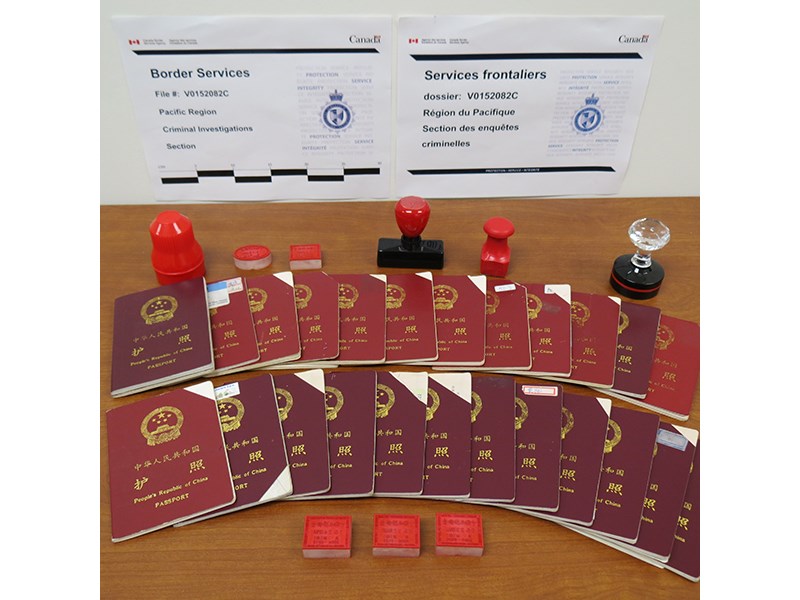 Four more people have been sentenced — to conditional jail terms and/or fines — for their involvement in B.C.’s largest immigration fraud case, based in Richmond.

Wang’s businesses served more than 1,000 customers between 2006 and 2013, charging more than $10 million for services. Border agents seized 321 Chinese passports at the time of his arrest.

On Friday, CBSA’s Inland Enforcement Section said it has identified over 1,600 suspected clients of New Can Consultants Ltd. Of those, 770 clientshave either lost their residency status or been reported for inadmissibility under the Immigration and Refugee Protection Act.

Zheng Wen Ye received a conditional sentence of two years less a day and fined $94,532 after pleading guilty to charges related to income tax evasion, passport fraud and misrepresentation as an unlicensed immigration consultant for New Can and Wellong. Between 2007 and 2011 she evaded $42,719 in income tax.

On Aug. 29 Tian “Gary” Chen was sentenced to a conditional sentence of six months less a day and 40 hours of community service for counselling misrepresentation as an unlicensed consultant with New Can. “Chen was responsible for providing false addresses and phone numbers to clients so they could maintain the appearance of residency in Canada while living outside of the country,” noted CBSA.

Finally, On July 6 Che Fang was fined $50,000 for misrepresentation after hiring New Can to help him apply for permanent resident status. New Can made Fang a fake employee and issued paycheques and annual tax papers. “However, in reality he paid his own salary to create the appearance that he was working for the company,” noted CBSA.

We continue to investigate any case of alleged offences under the Immigration and Refugee Protection Act and are dedicated to upholding the integrity of our immigration system,” said Harald M. Wuigk, Assistant Director, Criminal Investigations Section, CBSA, via a statement.

While a May 2016 report by Canada’s Auditor General determined the federal government has not been adequately detecting and preventing citizenship fraud, both the CBSA and CRA are hailing the recent sentences as successes.

“Tax evasion costs all of us. This sentence is a reflection of the valuable work done by our staff to ‎ensure that, without exception, all Canadians abide by the same tax laws,” said Elvis Dutra, assistant director, Criminal Investigations, CRA, via a statement.

In many cases, Wang, with assistance from others, falsified the amount of time a Chinese citizen had spent in Canada. Wang often altered stamps or added new ones to his client’s passports. He created misleading paper trails that led immigration officials to believe his clients were in Canada for longer than they were (in order to meet the standards of permanent residency, a precursor for citizenship).

Along with six counts under the Criminal Code and the Immigration and Refugee Protection Act, Wang has pleaded guilty to two counts under the Income Tax Act, including failing to report $2,722,305 of taxable income from 2007 to 2012.

Court heard Wang also claimed several thousand dollars of low-income tax benefits between 2008 and 2013, which Crown prosecutor Bruce Harper compared to robbing a bank, and then stealing the charitable donation can on the way out.

Harper described Wang’s clients as “well-to-do” foreign nationals, willing to pay for fraud to get into Canada.

Jin “Fanny” Ma, Ming Kun “Makkie” Wu and Wen “Vivian” Jiang, all of Richmond, were also sentenced this year to 18-months in jail in relation to their work with New Can and Wellong, after previously pleading guilty to several charges.