The City of Richmond has fired back at Port Metro Vancouver’s assertion that the city is not doing enough to protect industrial land.
Aug 7, 2015 12:38 PM By: Graeme Wood 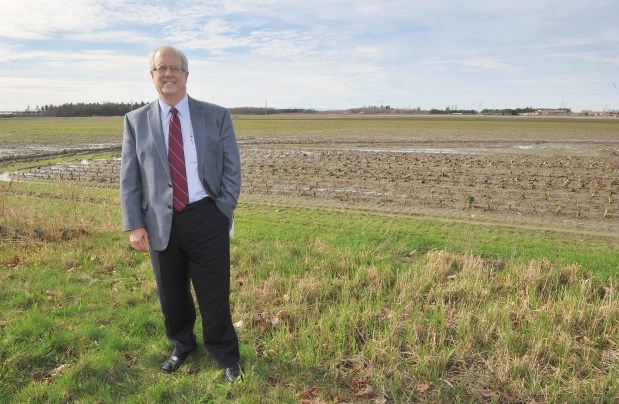 Richmond Mayor Malcolm Brodie has steered the City of Richmond to densifying the City Centre area while advocating for the protection of farmland. Brodie says while the port has recently renewed the farming leases at the Gilmore Farm lands, his council fears the farm will one day be used for port lands. Vancouver Sun photo.

The City of Richmond has fired back at Port Metro Vancouver’s assertion that the city is not doing enough to protect industrial land.

Furthermore, the city is demanding new federal regulatory changes be enacted to prevent future acquisitions of protected farmland by PMV.

At the heart of the matter is a series of terse exchanges between the city and the port over the port’s acquisition of the 230-acre Gilmore Farm Lands and subsequent listing of the land as a “special study area.”

The city is asking the port to ensure the land remain farmed in perpetuity but despite the port claiming it has no immediate intention to develop the land, the city has claimed the port “intends to develop (the land) for port purposes.”

The report states the Gilmore Farms transfer, from 2008, was authorized by Transport Canada, which overruled the provincial Agricultural Land Reserve, intended to preserve farmland.

As such, the city, via an upcoming Union of BC Municipalities resolution, will call on the Minister of Transport Canada to prohibit the port from purchasing more farmland in Metro Vancouver. It also requested the Minister to require the port to hold “meaningful consultation” for dispute resolutions over municipal/port issues.

This year, the port and city have exchanged barbs at one another, via letters, over the Gilmore Farms conflict.

The port has noted the city has used industrial and waterfront land to develop commercial and residential properties (such as in the Bridgeport area).

Rattan’s report summarizes a number of initiatives the city has taken over the last six decades to maintain industrial land.

In total, it noted 1,300 acres of land that’s become available through rezoning. The report does not note the times the city has facilitated residential development on farmland, such as at Terra Nova.

The report claims “it appears that the PMV has not adequately explored alternative opportunities to expand in urban areas outside the ALR and, through its actions or inactions, appears to prefer the acquisition of ALR agricultural land as a cheaper and easier solution.”

The report further notes a number of initiatives the city has taken to facilitate port activity on unused industrially zoned land. Recently, for example, the city “facilitated” servicing and rezoning of a 14-acre site near Riverport for an industrial-retail park. In total, the city claims there are hundreds of acres that can be developed for industrial use.

“To date, the city has no confirmation that PMV has elected to pursue any of the industrial land options identified by Richmond, beyond its acquisition of the former Fraser Wharves property for which the city facilitated servicing, diking and access for port purposes.”