Ivan Pak, candidate for the People’s Party of Canada (PPC) and an immigrant from Hong Kong, defended the leader of his party who has stated a PPC government would reduce the number of immigrants coming into Canada.
Oct 11, 2019 7:30 PM By: Maria Rantanen 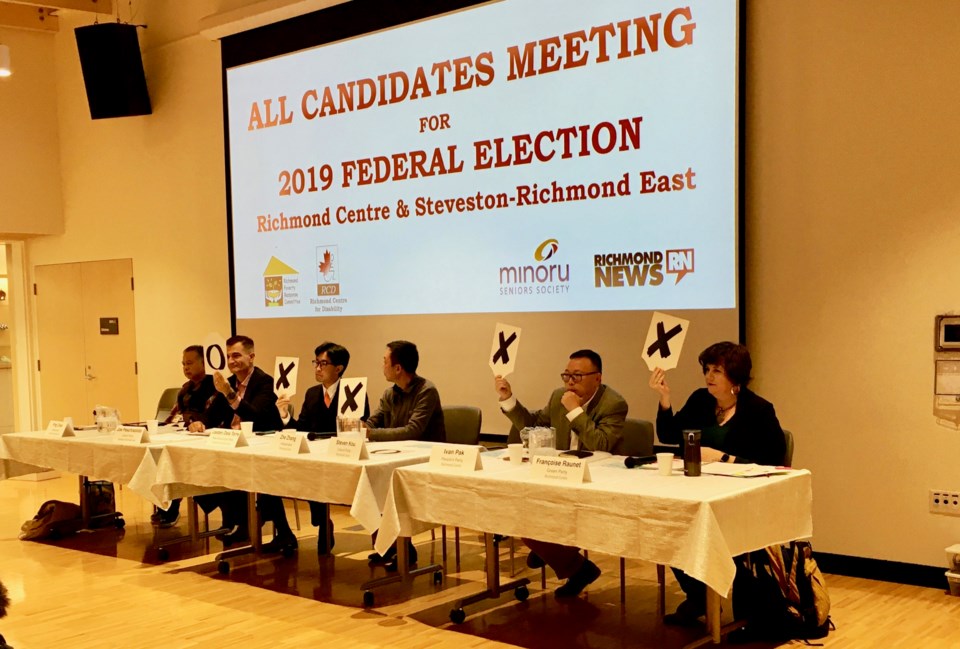 Candidates answered questions from the audience as well as a series of yes/no questions at the all-candidates meeting on Tuesday at the Minoru Centre for Active Living.Maria Rantanen

Ivan Pak, candidate for the People’s Party of Canada (PPC) and an immigrant from Hong Kong, defended the leader of his party who has stated a PPC government would reduce the number of immigrants coming into Canada.

While Tuesday’s social justice-themed all-candidates meeting focused on hot-button issues like housing, pharmacare and birth tourism, there were pointed questions at candidates on their political and personal stances.

Pak was challenged on several issues – his leader’s comments about immigrants and Greta Thunberg and his own stance on pride parades and climate change. Ironically, given the theme of the debate, he said social issues shouldn’t be discussed in a federal election.

“Today, I am here as a member of parliament candidate, and I don’t think social issues should be involved in this particular election,” he said.

A question from the audience quoted Maxime Bernier, leader of the fledgling PPC, that immigration shouldn’t “change the cultural character and social fabric of Canada,” and asked Pak what he thought of this idea.

Pak said he doesn’t think his party is racist or anti-immigration, but there should be a discussion about what level of immigration is reasonable for Canada.

“Now we have a government trying to open our borders and bring more people, 350,000 a year. I think, as Maxime already said, three years of that number is the population of Nova Scotia,” Pak said.

He added the PPC would welcome “real refugees” and economic immigrants to “build our country.”

“This is not anti-immigration, we just want to have reasonable immigration levels,” he said.

Pak wasn’t the only candidate who was taken to task on their party’s policies.

In the 2015 election, Liberal leader Justin Trudeau vowed that election would be the last one under the first-past-the-post electoral system. However, the plan to switch to a proportional-representation (PR) system was scrapped early in their mandate after a short consultation.

Liberal candidate Joe Peschisolido said Trudeau is committed to revisiting the issue after the next election.

“His rationale for not bringing it forward was he feared that, without a proper look at it, we’d have fringe parties, we’d have instability,” Peschisolido said. He added that he supports a PR system, but the government needs to figure out what kind is needed.

Peschisolido, however, was challenged by the moderator of the debate, Richmond News’ editor Eve Edmonds on Trudeau’s pledge in the 2015 election.

He answered that, indeed, that was what Trudeau had said, and he supported that position.

“Then he made the determination it wouldn’t be the last election under that old system,” Peschisolido said, adding that their current platform states they’ll look at it again after the election.

Pak’s personal position on LGBTQ issues was also challenged at the meeting.

Last year, Pak was strongly opposed to the SOGI policy, which was a provincial education policy that is designed to make LGBTQ students feel included and welcomed.

At the meeting, he defended his position to not take part in a pride parade, and stated he as the “right” to say he thinks SOGI is “not good for children.”

His rationale for not participating in a pride parade was because “radicals are actually hijacking this movement,” he said.