As man goes missing, presumed drowned, on the river, search and rescue volunteer Brian Hobbs warns people to at least wear a lifejacket when they venture out to sea
Jun 9, 2014 12:45 PM By: Alan Campbell 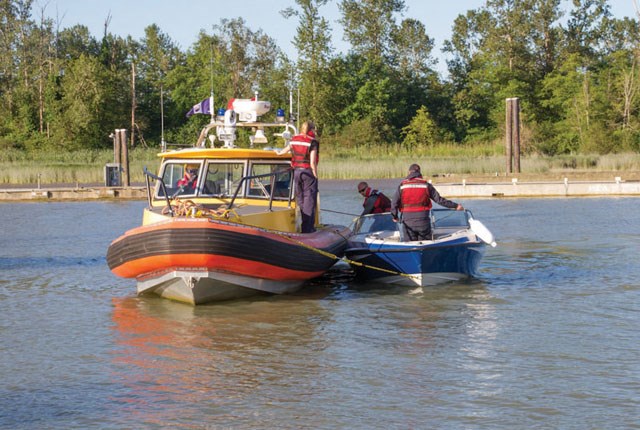 Richmond’s volunteer search and rescue team is warning people to wear a lifejacket while on the water, after a man went missing Saturday night on the Fraser River and is presumed drowned.

The RCMSAR (Royal Canadian Marine Search and Rescue) team was involved in the late night search for a 30-year-old man who fell overboard after the boat he and a friend were sailing in ran out of fuel and drifted under the Alex Fraser Bridge.

The man couldn’t swim and wasn’t wearing a lifejacket. Richmond’s RCMSAR crew and other emergency services scoured the waters for the man before the search was called off later that night.

Richmond RCMSAR’s Brian Hobbs said people are totally disrespecting the Fraser River when they go out on their boats without wearing a lifejacket.

And, over the last two weeks, Hobbs has seen a marked increase in the number of people on the river without a lifejacket.

“You’ll see families heading out on their boats and all the kids have their (lifejackets) on, but the parents don’t,” said Hobbs.

“If something went wrong, you will rarely have time to react and put yours on. It doesn’t matter if you can swim or not.

“The river is totally different from the ocean; there are strong currents out there and I really don’t think people appreciate how powerful that river can be.”

Hobbs believes people develop a false sense of security having spent most of their boating hours on the ocean and in the lake during summer vacations, where water conditions bear little relation to the Fraser.

“Lots of people dock their boats at Steveston, but some seem to forget they have to navigate the river to get to the ocean,” Hobbs added.

“Far too many are unprepared for problems that could arise while out there and inexperience is a big factor when it comes to new boaters out there.”

Transport Canada provides Safe Boating Guides to provide people with more information. For more information about SAR, to obtain a guide, or to arrange a boating safety presentation at your local marina, contact Station 10 at info@rcmsar10.org.