They waited more than six years to see the man accused of killing their much-loved daughter, sister and friend face justice – now they’re having to wait some more.
Oct 9, 2020 3:16 PM By: Alan Campbell 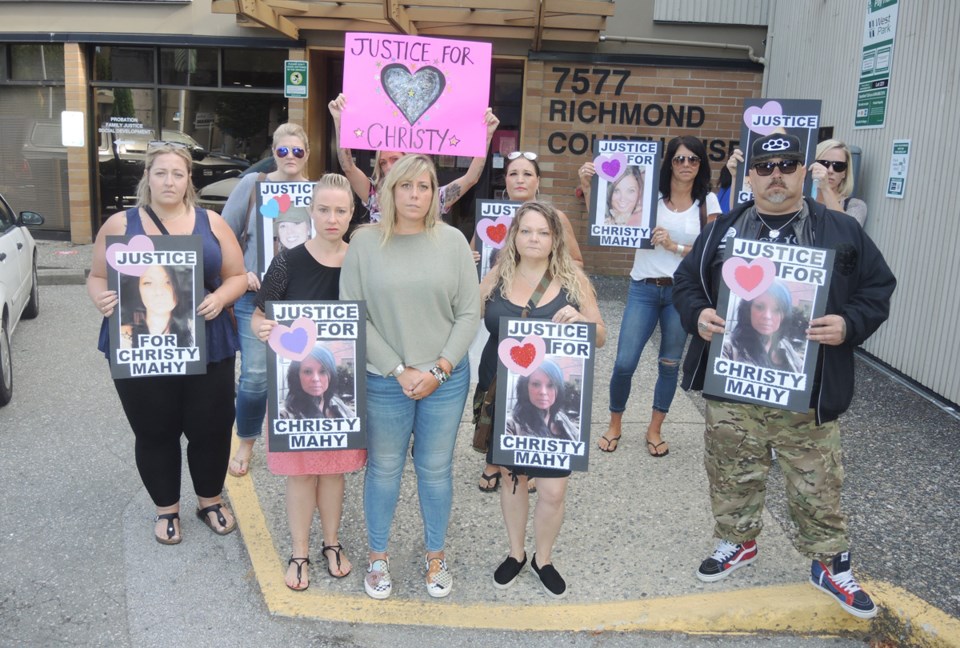 Christy Mahy's family and friends show their support for the Richmond woman killed in 2014, while standing at the intersection of Russ Baker Way and the Dinsmore Bridge. The driver accused of causing her death left Canada after the accident and was only extradited on Tuesday to face the charge. Alan Campbell photo

They waited more than six years to see the man accused of killing their much-loved daughter, sister and friend face justice – now they’re having to wait some more.

Family and friends of Christy Mahy – who was killed in 2014 when the car Erjon Kashari was driving plowed into her as she stood at an intersection sidewalk – have made individual efforts to attend the bail hearings of the accused, who was extradited from Albania in August.

However, his hearing has already been delayed three times in the last two months, for no apparent reason.

And the constant deferrals, often at the last minute, are a constant source of angst for Christy’s relatives and close friends, many of whom take time off work or arrange childcare to attend the court dates.

“It’s just so very frustrating,” said Christy’s sister, Joni, wo turned up en masse in August with around a dozen people at Richmond Provincial Court for Kashari’s first hearing, two days after Canadian officials escorted him back to Canada to face justice.

“I’m not sure how much my dad knows either, and he’s been in touch with Crown Counsel from the beginning.”

One of Christy’s closest friends, Brandie Mol, had stronger words for the justice system, labelling the treatment of Christy’s family as “absolutely disgusting.”

“The most upsetting part is that they usually update (court dates online) just hours before court date is set to happen,” Mol told the Richmond News.

“The mission statement of the BC Criminal Justice System begins with ‘We make timely, principled, and impartial charge assessment decisions that promote public safety, justice, and respect for the rule of law.’

“Timely? It has now been over six years we have had to live without her and very little has changed. (Kashari) may be in custody, but we are still waiting for (Christy’s) justice, with no end in sight.”

Kashari was in Canada on a work permit at the time his Pontiac SUV plowed into 36-year-old Mahy as she stood at the intersection of Russ Baker Way and the Dinsmore Bridge.

Despite there being witnesses to the accident and Kashari remaining at the scene, he was able to leave the country and was only charged, in his absence, five years later with criminal negligence causing the death of Mahy.

Kashari was arrested last year in Albania and was reportedly being held in custody there until COVID-related travel restrictions were lifted.

Christy’s father, Ron, has fought long and hard to get answers from the authorities and ultimately bring the driver accused of causing his daughter’s death back to Canada to face the charges.

A spokesperson for the BC Prosecution Service (BCPS) said it couldn’t comment on cases that were still before the courts.

However, he added that BCPS has been and continues to be “in contact with the family of the victim pursuant to our obligations as set out in our policies and the legislation relating to victims of crime. Those discussions are confidential.”