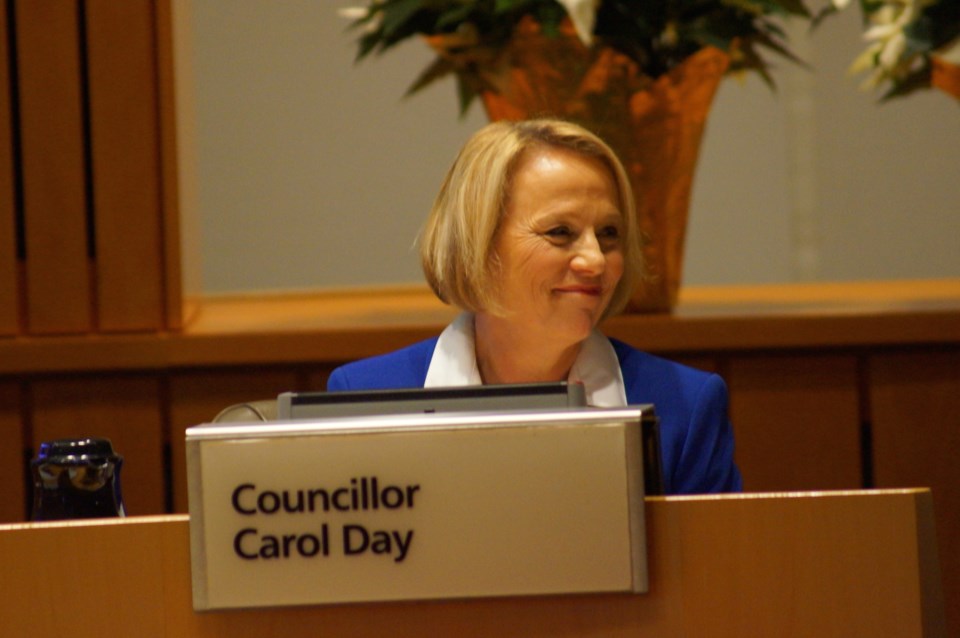 "I really feel for this developer. Obviously there's more expertise out there than around council," said Coun. Bill McNulty after listening to fellow councillor Carol Day express her opposition to one of two developments she voted against at city council on Monday.

The newly-elected Day rejected two proposed developments, one because it extended the maximum allowable tandem parking spaces and the other because it will help set a precedence for oversized homes in a Shellmont neighbourhood, near to where Day lives.

An application by Zhao XD Architect to rezone four single-family home properties on Granville Avenue into medium density residential to build 18 three-storey townhouses was rejected by Day because the applicant added more tandem parking spaces than what is normally allowed (two units over the 50 per cent threshold) and such spaces "will eventually be used for junk collection."

Day said tandem spaces, where cars park one behind the other, can lead to future "slums" as they become used for storage. She also voiced concern that the development would have people using nearby MacNeill secondary school for overflow parking.

Day said tandem parking is too tight and the city can "do better" with its requirement that townhouses have no more than 50 per cent tandem spaces.

According to city staff, with or without the extra tandem spaces (sometimes designed to add more density for the developer) the complex would still be 18 units. Also, there is adequate parking on Granville, said Victor Wei, the city's head transportation planner.

Following that, Day also voiced her opposition to a single-family home development at 11340 Kingsgrove Avenue, whose building height would dwarf surrounding homes. She said the development sets a precedence for large three-storey homes in the area, an issue known to cause problems for neighbours.

While the development was all but approved before Day's time on council (see below) and required a formal vote on Monday, Mayor Malcolm Brodie ensured Day's opposition vote was heard by calling for a separate vote on the matter. Council then promptly voted 8-1 to accept the development.

Meanwhile, McNulty said the process was now complete and that he initially voted against the development, even though he didn't.

McNulty, as well as councillors Harold Steves, Chak Au and Linda Barnes passed the application at a planning committee in January, 2014. McNulty was the committee's chair.

The Kingsgrove project was then adopted on consent at a council meeting the same month. Again, McNulty voted in favour.

It then went to a public hearing on Feb. 17, 2014. No one spoke out against the application. McNulty hinted that "members of current council could have been there" but weren't.

Following that McNulty was given a fourth opportunity to oppose the project but didn't when council adopted the minutes of the public hearing on Feb. 24.

Also on Monday's agenda was:

- The city will write a letter to "encourage" continued discussion for a regional, Metro Vancouver Homeless Transit Plan.

Richmond RCMP searching for high-risk missing woman
Dec 3, 2020 12:32 PM
Comments
We welcome your feedback and encourage you to share your thoughts. We ask that you be respectful of others and their points of view, refrain from personal attacks and stay on topic. To learn about our commenting policies and how we moderate, please read our Community Guidelines.