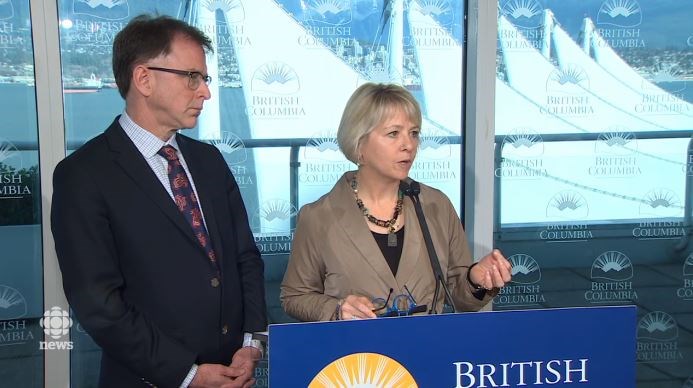 A fifth case of coronavirus has been revealed in B.C. on Friday.

The woman is in her 30s and flew into YVR from Shanghai recently, before driving to her home in the B.C. Interior region.

B.C.'s top medical health official, Dr. Bonnie Henry, said Friday the woman had not been in the Hubei Province in China, which is understood to be the global epicentre of the coronavirus outbreak.

It’s believed the woman’s symptoms started around the time of her arrival at YVR and health officials are looking at whether or not they need to contact other people on her flight.

“She had a small number of close contacts (after the flight),” added Henry on Friday.

Asked what the chances are of other passengers on that flight contracting the disease, Henry said the risk is “still very low.”

“My understanding is that the onset of symptoms were during the flight and she was wearing a mask.

“We have a protocol for following up, (which involves) checking passengers three rows and back and forth…then we connect with them.”

Henry said the health authorities were not yet in a position to name which airline the woman flew in with and on what day.

“We need people to be able to trust us and come forward. We will be able to give more information next week.”

The woman, added Henry, is in isloation at her home in the Interior and is being monitored by the health authority there.

Asked if there has been any more consideration of banning flights coming into YVR from China, B.C. health minister Adrian Dix said they continue to work closely with the federal government.

“(We) take every situation seriously and we ensure people coming back (into Canada) have the correct access to health care,” said Dix.

“The advice from the World Health Organization and the federal government is that we don’t (ban flights).”

Referring to messaging being put out by the Chinese consulate in Canada that people with coronavirus concerns should call 9-1-1, Henry reminded people that the number to call for health advice is 8-1-1.

Four of the five cases are in the Vancouver Coastal Health region - which includes Richmond - are in stable condition and are still recovering in isolation at home, said Henry on Tuesday.

It emereged on Friday that Africa has its first confirmed case of coronavirus after a person in Egypt tested positive for the disease.

The person, who is not Egyptian, is in hospital isolation, the country’s health ministry said.

The ministry said it had immediately informed the World Health Organization and taken all necessary preventative measures.

Numbers continued to climb after the government changed the criteria by which it tracks confirmed cases. China on Friday reported 5,090 new coronavirus cases and 121 new deaths in the previous 24 hours.

The authorities said a total of 63,851 people had been infected by the coronavirus and at least 1,380 had been killed by the disease. Most of the cases occurred in Hubei Province, the center of the outbreak, which recorded 4,823 new cases and 116 deaths over the same period.

The tally in Hubei jumped most drastically on Thursday after the authorities changed the diagnostic criteria for counting new cases. The government now takes into account cases diagnosed in clinical settings, including the use of CT scans, and not just those confirmed with specialized testing kits.

Earlier this week, Henry urged the Lower Mainland's Chinese community to go about their business, despite the coronavirus death toll topping 1,000 on Tuesday.

Henry was asked Tuesday morning at a media conference if it was necessary for events to be cancelled, especially in the Chinese community, where people are avoiding public places in their droves

“The risk is still very low here (in B.C.) so, no, I don’t believe we should be cancelling events," Henry added at the time.

“The message is the same, if you’re feeling sick, stay at home. Wash your hands frequently and take precautions if you’re coughing and sneezing.”

Henry said that, as of Tuesday, 371 samples have been tested for coronavirus in B.C. and the number of new cases is starting to level off.

“Most people that have been tested have viruses consistent with this time of the year, such as the flu.”

Henry has previously urged people who've travelled from the Hubei province of China, the global epicentre of the virus outbreak, to self-isolate for 14 days when they return to Canada and B.C.

Asked how the authorities know such people are self-isolating for that time, Henry said they’re relying on the CBSA at the airport to give the right advice.

“(People from the Hubei province) are being told to get in touch with the health service within 24 hours.

“People coming back from others parts of China are being asked to monitor themselves for symptoms.”

The News reported last week how two more people tested positive for the coronavirus in the Vancouver Coastal Health region, bringing the provincial total to four.

Henry said the two new cases were connected to the woman in her 50s that was revealed the previous week as being the second confirmed case in the province.

Henry told media last week that the two new cases were family members of the woman.

She added that the two new cases are visitors from the Wuhan area, in Hubei province, where the virus is believed to have started late last year.

According to Henry, all three people in that household were in self-isolation and are reporting to the health authorities.

She also reiterated advice for people to consider quarantining themselves and their children for 14 days if they have recently travelled back from the Hubei province in China, the global epicentre of the outbreak.

The Richmond News previously asked the B.C. Ministry of Health to explain why the patients' city of residence is not being given.

We were told by a ministry spokesperson that “in order to maintain the privacy of the patient, we are not releasing their location at this time.”