Richmond Chamber of Commerce hosted Erin O'Toole, the federal leader of the opposition, at its first in-person event since the COVID-19 pandemic.
Jul 12, 2021 3:42 PM By: Maria Rantanen 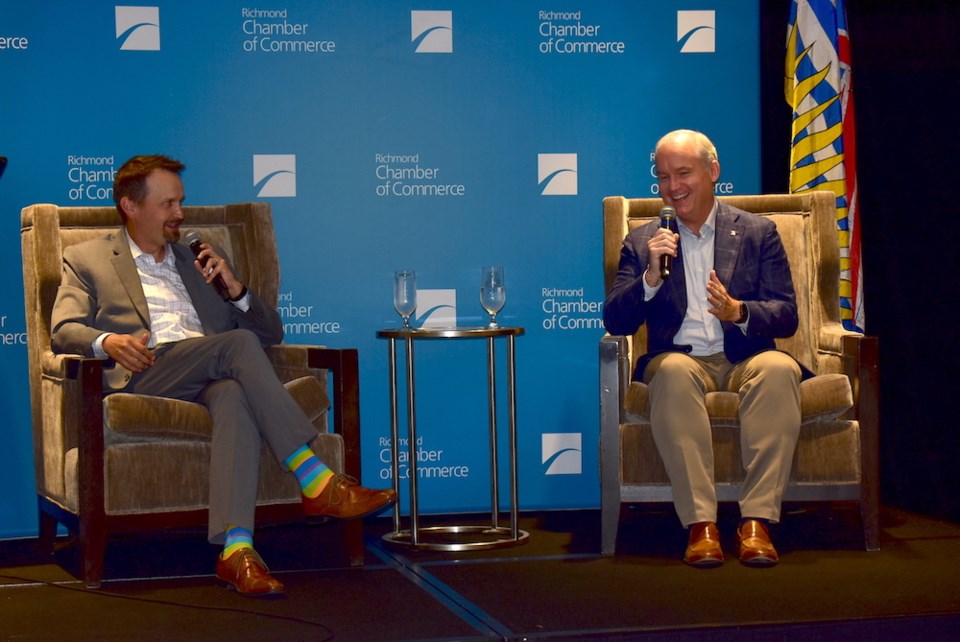 A pit stop by the federal leader of the opposition in Richmond Monday seemed to part of a pre-election campaign tour.

Erin O’Toole was just finished a tour of Alberta and was next heading to Vancouver Island and the Okanagan.

Speaking to a business audience at the first in-person event organized by the Richmond Chamber of Commerce since the pandemic, O’Toole outlined a five-point recovery plan that a Conservative government would implement as Canada emerges from the COVID-19 pandemic, including creating a million jobs for Canadians within a year.

His speech to the chamber audience included pointed criticism of Justin Trudeau - as well as the NDP and Greens – calling the prime minister’s approach to China “naïve.”

When asked later by the Richmond News whether a Conservative government would support decriminalization of small amounts of illicit drugs, something supported by chiefs of police across Canada to keep those struggling with addiction out of the court system, O’Toole said it’s something he would be willing to have a conversation about.

While the Conservatives have “big concerns” with the legalization of drugs, O'Toole said, if someone is struggling with an addiction, they should be dealt with compassionately and, if in the court system, their addiction should be a “sentencing consideration.”

“For discretion to remove a criminal penalty or sanction from somebody with an addiction, we are open to those discussions,” O’Toole said.

But, he added, there would be a focus on harm reduction and a commitment from a Conservative government to treatment for addicts.

Further criticism was of the rollout of federal support to individuals and businesses during the pandemic as well as how slow the federal government has announced infrastructure spending that is supposed to stimulate the economy after the COVID-19-related downturn.

He also pointed out the federal government had to take on a large deficit to support businesses.

Chamber CEO Dan Baxter, however, pointed out Richmond businesses benefited from the federal financial support, and wage and rent subsidies and loans were “tremendously helpful” for them.

“The recovery would be looking a lot different today… and I know at least two-thirds of businesses were accessing them at any given time,” Baxter said.

O’Toole, however, responded saying the fifth pillar of the Conservative recovery plan is to get back to a “balance” within a decade to ensure things like old age security and health care are secure.

“Trudeau is putting all at risk – he has doubled the national debt,” he said.

Trudeau was in Coquitlam last week announcing a $10 a day childcare program and later in Surrey to promise federal dollars for a SkyTrain expansion from Surrey to Langley.

He was also on the North Shore in Deep Cove Thursday filming a campaign ad.

“I think the chances are relatively high that we're getting an October election. It’s kind of the country's worst-kept secret,” said Gerald Baier, a UBC political science professor. “When you're a minority government, the chance that you can turn that into a majority, even a squeaky majority, is almost too hard to resist.”