Majority of participants favour sign bylaw. (See photos and City of Richmond presentation below)
Mar 17, 2015 10:56 AM By: Graeme Wood 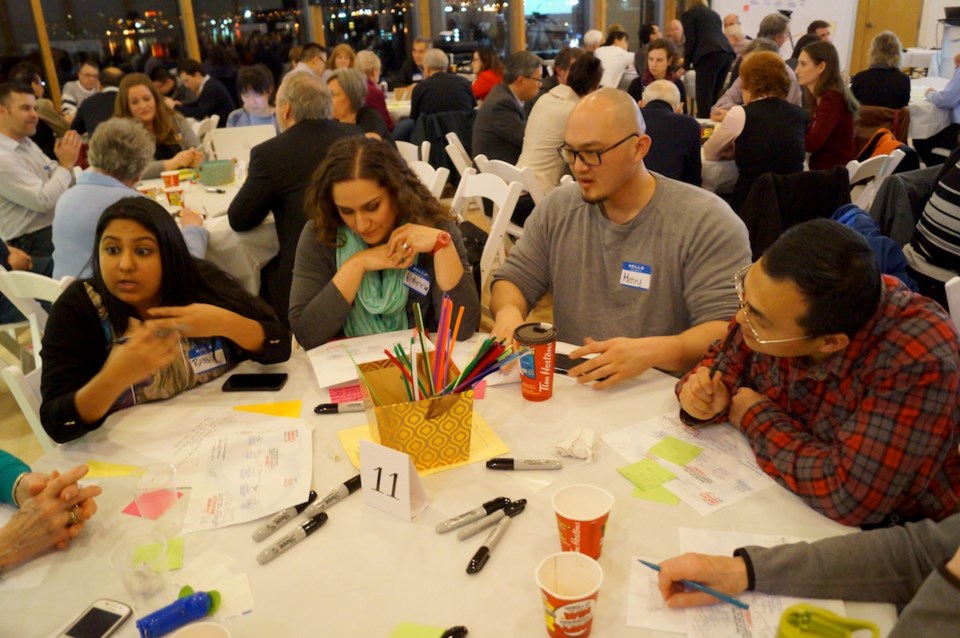 At the UBC Boathouse on March 12, 2015 citizens gathered during a city-run workshop on foreign signs. Second from the right is 2014 council candidate Henry Yao, who supports the idea of a bylaw to limit foreign language on signs and mandate some English or French (official language).

About 100 Richmond residents participated in a workshop on foreign language signs Thursday evening at the UBC Boathouse.

The event — conducted in English and replete with markers, notepads and nametags — was part of what the City of Richmond is calling a public consultation process to determine if the community has interest in a sign bylaw that enforces either of the nation’s official languages — English or French — on publicly displayed signs.

The majority appeared, through an informal show of hands, to favour the idea.

The city reported a similar majority is in favour of a bylaw, via responses on its online survey site, LetsTalkRichmond.ca.

However, just as many seemed to agree there needs to be more public consultation on foreign language signs, as well as greater community integration and education for new immigrants.

One man stood up and called for politicians to take more leadership.

“Set a vision. If we like it we’ll stay (in Richmond), if not we’ll leave,” he said, to many cheers.

At the event, Mayor Malcolm Brodie stated he opposed a bylaw but favoured a public education campaign for businesses.

Problematic for Yao was how the workshop was facilitated.

“At the end, the facilitator said, ‘It looks like no one changed their mind.’ Our table was very upset. It’s as though they wanted us to change our mind,” said Yao.

Richmond resident Kerry Starchuk, who started a petition for a bylaw in 2013 to rekindle the debate, agreed.

“It was no different than any of the forums I’ve been to: Dividing into groups and giving you information. It’s not effective. There was frustration in the room; I felt the tension…But, hopefully it’s the beginning of some healthy talk,” said Starchuk, whose research has proven the debate started back in 1996 with letters and memos from residents to City Hall.

After a brief initial discussion between the dozen tables about what community harmony is, the audience was privy to several presentations.

According to Cecilia Achiam, Richmond’s sign bylaw manager, only permanent, exterior signs are regulated for size and design under existing bylaws (see presentation, below).

Signs such as those for real estate sales, bus shelters and window advertisements are, presently, entirely unregulated.

Achiam suggested there may be bylaw options to regulate “clutter,” or signage that’s unregulated. Such a move was recently done in Surrey.

According to the 2011 national census, 51 per cent of Richmondites spoke a Chinese language while 10.5 per cent couldn’t speak English at all.

He pointed out three examples of English-speaking, including Richmond Hill, Ont., imposing language restrictions/requirements on signs.

Hiebert said there are many Chinese diasporas around the world and that the “local trend” in Richmond is part of a “global process” of Chinese-oriented commercialization.

To pass a bylaw under the Charter of Rights and Freedoms, Richmond has been advised that such foreign-language signs must run contrary to “community harmony.”

Yao, who speaks both languages, said signage is a condition of lack of harmony in Richmond.

“I feel our community is very broken. There’s a sense of isolationism,” he said.

Starchuk said the issue goes beyond business signs. She said her neighbourhood often has Chinese-only real estate signs erected on developments and her home is inundated with Chinese-only advertisements, even from mainstream companies like Shaw and Telus.

Starchuk said every time she’s attended a public forum on immigrant integration it caters to the immigrant and not existing residents and how they feel.

“It just seems like the Canadian doesn’t have a voice anymore,” said Starchuk.

As such, she feels solutions cannot be found until everyone is included in the conversation.