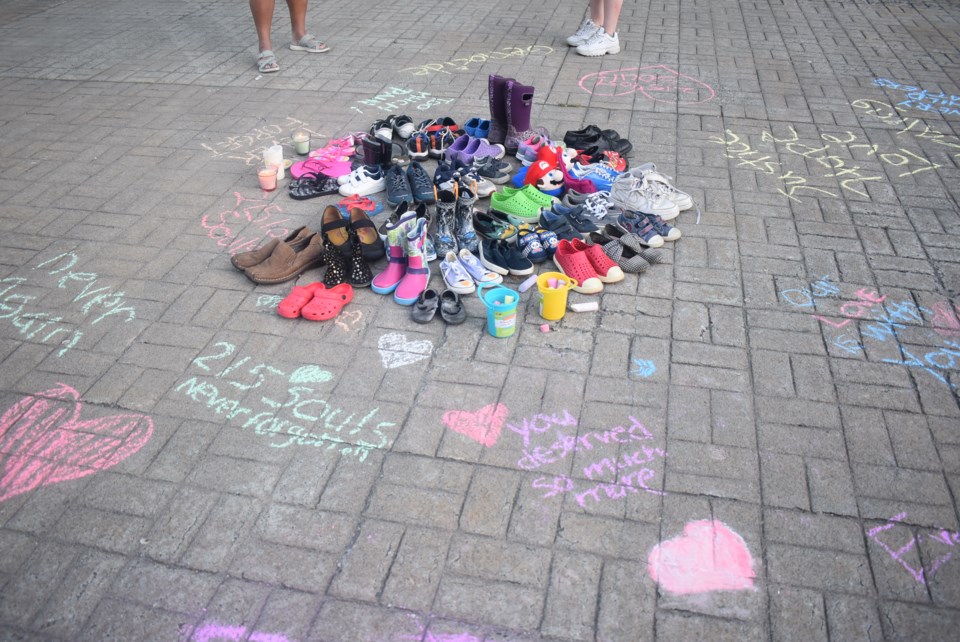 A shoe memorial grew at Brighouse library plaza to commemorate 215 children found in an unmarked grave in Kamloops.File photo

Howard Grant, councillor with the Musqueam Indian Band, spoke to Richmond council on Monday night as part of a presentation, spearheaded by Chaslynn Gillanders, about forging closer ties between the two groups.

Just two weeks ago, unmarked graves of 215 children were found at the former Kamloops Indian Residential School and this has sparked calls from Indigenous people for more action towards reconciliation.

There were two vigils held at Brighouse library to remember the children.

“I tell the youth of today that we have the opportunity to create a new chapter, maybe a new book, as a result of all of these new findings,” Grant told council, adding there can’t be “words of sorry without action.”

Gillanders, who is part of the Nisga'a Nation, was calling on the city to do a land acknowledgment at public meetings – something the city doesn’t do and according to Richmond's mayor, Malcolm Brodie, can’t do because of two on-going lawsuits.

Gillanders was also asking the city to implement calls to action from the Truth and Reconciliation Commission (TRC) and have more education about the history of Indigenous people in what is now Richmond.

“It’s important for the city to recognize the Indigenous people who have constitutional rights, and distinct actions are required,” Gillanders told council. “I submit that Indigenous issues must be addressed through Indigenous-specific policies.”

Grant said he was grateful to Gillanders for bringing forward the issues to Richmond city council.

“If you don’t have that education and deep appreciation and understanding (of Indigenous history and culture), how can you develop a relationship?” Grant said.

Coun. Bill McNulty referred the presentation made by Gillanders and Grant to city staff, saying they should look at “what further plans do we have as a city to recognize the Indigenous people and land but also consultation on what could be done… and what actions could be taken that are unique to Richmond.”

Coun. Harold Steves said having Grant on the Steveston Harbour Authority board for the past year has “made a world of difference” because there are many First Nations fishers working in Steveston.

“Anything we can do to improve our relationship is really, really important,” Steves added.

Council voted unanimously to refer the presentation from Gillanders and Grant to city staff to come back with a report on how to move forward.