Steveston residents were shocked to receive a racist pamphlet at their doors Thursday morning that took aim at Chinese people and pointed them to an alternative-right (“alt-right”) website. Police say the pamphlets warrant an investigation.
Nov 17, 2016 4:41 PM By: Graeme Wood 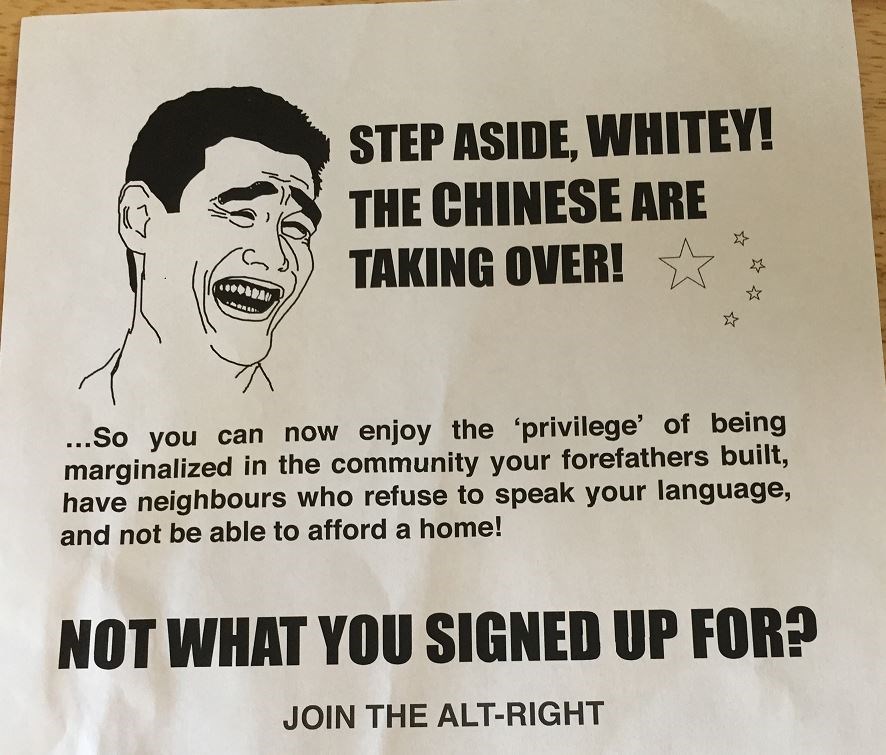 These pamphlets were distributed in a Steveston neighbourhood. November, 2016. Photo submitted.

Steveston residents were shocked to receive a racist pamphlet at their doors Thursday morning that took aim at Chinese people and pointed them to an alternative-right (“alt-right”) website.

“I was horrified, absolutely horrified. I thought, is this real? Oh my gosh, this is what’s happening in the United States right now. I just couldn’t believe this was happening,” said one resident, who feared possible retribution if named by the Richmond News.

The resident said the pamphlet was “an effect of [president-elect Donald] Trump.”

The alt-right movement has gained considerable publicity in the United States following the election of Donald Trump as president on Nov. 9. Trump recently named media mogul Steve Bannon as his chief advisor. Bannon is chairman of Breitbart News, which many claim gives a voice to white nationalists.

The pamphlets read: “Step aside whitey, the Chinese are taking over.”

It alludes to ethnic Chinese people refusing to speak English and making housing prices unaffordable. It suggests white people are being marginalized in “the community your forefathers built.”

Area resident Mike Karamanian said one of his neighbours came to his door in tears after receiving the flyer.

“I’m pissed that someone thought this was acceptable,” he said.

Another area resident, Kelly Greene, said she was equally appalled.

“There is no place for that divisive and racist fear-mongering in Canada, and certainly not in Richmond. We are each other’s neighbours, coworkers, and friends. The hate spewed in the United States is not welcome here,” said Greene.

The pamphlets were distributed in the “Springs,” a neighbourhood near No. 1 Road and Steveston Highway.

"The Richmond RCMP take all matters that may be hate or bias motivated very seriously. We are currently investigating this incident. We realize that incidents like this have a direct impact on citizens and our community. We encourage people to report all incidents such as this to their local police,” said Cpl. Dennis Hwang.