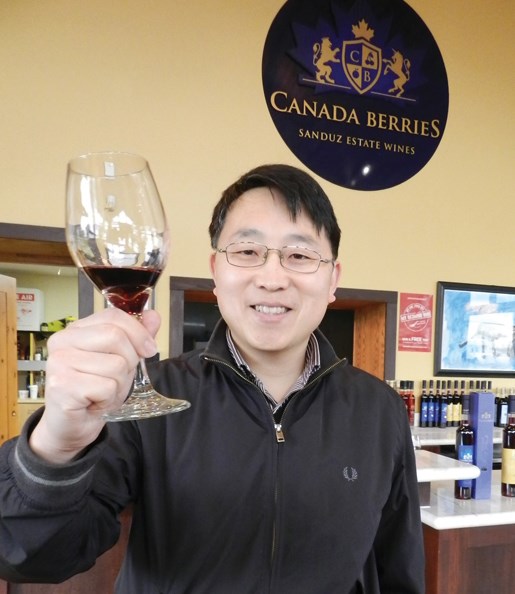 Tommy Yuan of Canada Berries in east Richmond is planing to double its wine exports this year, most of it heading to China where their blueberry products are highly sought after. Photo by Philip Raphael/Richmond News

It’s not every day that a business projects doubling its sales.

But the thirst for Canadian-made wine products in Asia is driving one Richmond winery to ramp up its bottling lines.

Tommy Yuan, founder and director of Canada Berries Enterprises Ltd. — formerly known as Sanduz Estate Winery in the heart of east Richmond’s blueberry growing fields — is confident his 10-acre, blueberry growing and wine bottling operation will be building on the 50,000 bottles it exported in 2014.

While targeting the growing Chinese market is not a new story, capturing more of the non-grape wine market is a developing trend.

Both Agriculture Canada and the B.C. Wine Institute have both owed to the growth of middle class consumers who have a taste for premium products, including wine.

“Improving health is part of the attraction. And the second thing is that many customers in China view blueberries as a rare fruit,” said Yuan, explaining the demand for the line of antioxidant-rich blueberry wines Canada Berries produces from fruit grown in Richmond and other parts of the Fraser Valley.  “They are wowed mainly on the taste side. The health aspects, that tends to come later. And China mainly relies on importing the fruit, fresh or frozen, from countries such as Canada and Chile.

“That’s why they (Chinese) see our wines as a very high-end, luxury item,” he added.

According to provincial government figures, although 80 per cent of B.C.’s wine exports in 2011 were shipped to China, a mere one per cent of China’s total wine imports were from Canada, ranking it 12th behind countries like France and Australia.

Yuan said his operation, and others like his in the Canadian industry, are working hard on closing ground on the export market leaders. And in his case, Yuan said he is hoping to leverage the unique nature of Richmond as a popular destination for Chinese immigrants to help open more doors to Asian markets.

“A lot of our promotion is happening by word of mouth through the community here,” Yuan said, adding he is also tapping into the Canada Asia Business Network, an organization he created in 2007, which currently has more than 1,000 members on its books.

“That’s part of my current focus, helping promote Canadian business to the Chinese market,” said Yuan, who came to Canada in 1996 after studying computer science in Florida. “We are helping businesses here take their products, raise some capital and essentially do some business matchmaking.

“We are focused on three sectors: natural resources, innovations, and environmental products.”

And wine exports, it could be argued, fit into those categories quite nicely.

“I see this huge opportunity in China that could benefit this company,” Yuan said.

“Our goals are a bit aggressive and ambitious. But we have a very good team that’s working hard to get us into those markets.”

Part of the efforts on the ground here in Richmond to raise brand awareness about Canada Berries included some recent Chinese New Year celebrations at the Blundell Road location that invited the public to come and see what the business is all about.