BIV special report: As B.C. summers bring longer and more frequent stretches of extreme weather, the province’s businesses grapple with the challenge of rising costs, threats to natural resources and changes in consumer spending patterns.
Aug 21, 2018 9:14 AM By: Hayley Woodin 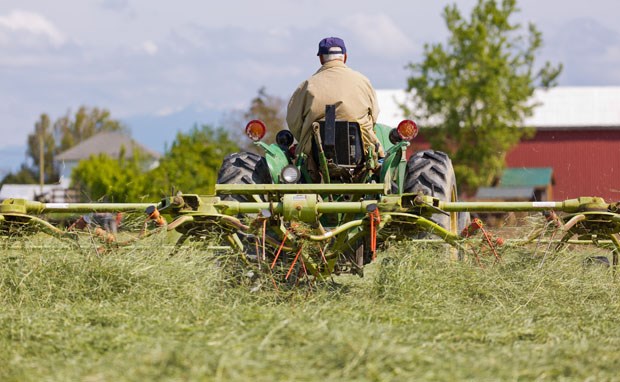 More than 2,300 British Columbians responded with their ideas on how the province can support the Agricultural Land Commission preserve farmland and encourage farming.

From California to Japan, record-breaking temperatures this summer have caused some inventories of fruits and vegetables to dwindle and driven food prices up sharply.

In British Columbia, the mercury has already registered 40 C in parts of the province, and communities across B.C. have broken decades-old temperature records in the last month.

If the trend continues, eating local could become an increasingly expensive proposition for those on either end of the farm-to-table supply chain.

“The biggest impact we would see as consumers are those of us who go to farmer’s markets,” explained James Vercammen, a professor in the faculty of land food systems at the University of British Columbia (UBC) and the former editor of the American Journal of Agricultural Economics.

“They’re going to see a lot more variability and probably higher prices,” said Vercammen, noting that the same is likely true for meals at restaurants that rely on local ingredients.

The heat itself isn’t necessarily an issue. Lower Mainland crops such as tomatoes and peppers are grown in temperature-controlled greenhouses, and warmer temperatures allow many outdoor crops to thrive.

“If our crops are getting the irrigation they need when they need it, this weather is great for production,” said Sean Smukler, junior chair of agriculture and the environment at UBC.

“I think if the Israelis saw the way we used water here, they’d laugh at us. They grow food in the desert because they’ve mastered the art of irrigation.”

Fifteen years ago, Jason Smith, a fourth-generation farmer and the owner of Fraser Berry Farms Ltd., couldn’t have imagined irrigating crops in early or mid-May. But drier springs have forced farmers who rely on surface water to do just that, which in turn drains reserves and restricts the amount of water a farmer can draw at any given time.

The heat has other implications too: his and other farms in the region have had to shut harvesting down early on days when the temperature is too high to risk running harvesting equipment that uses food-grade oils.

He also notes that some berry varieties from 20 or 30 years ago can’t handle the heat, but replanting means sacrificing yield, as younger plants produce less. He estimates it would cost a blueberry farmer $15,000 to $20,000 per acre to replant, and the first harvest wouldn’t come until the third year.

“That’s actually been a real contributing factor the last two years. Last year B.C.’s crop was down significantly and this year we’re nowhere near … what the crop should be for the acreage,” Smith said. “The numbers should actually be going upward. That’s Mother Nature.”

The BC Agriculture & Food Climate Action Initiative has been examining the effect of environmental factors on B.C.-grown products for the last decade.

In the Fraser Valley, it has identified warmer and drier summers, and greater frequency and intensity of extreme heat events, as two of five challenges facing local producers. The need to adapt to rising temperatures, in areas ranging from pest control to water management, is pushing the initiative to explore solutions.

“If it impacts the quality of your product, you’re not going to get the same price for your product, or you’re going to have potentially less of your product,” said Emily MacNair, director of the initiative, which works with local partners and provides funding for projects that address identified needs. “If you’ve got a quality or quantity issue, right away there’s an economic issue there.

“It’s kind of risen right up to the top, I think, for people as something that they want to see happen,” she said.

For some, the solution is to outfit land with an irrigation system, but it’s an expensive proposition.

Holger Schwichtenberg harvests 220 acres of grass and corn for his 165-cow dairy farm in Agassiz. Last year, with no water in June, July or August, his production fell between 30 per cent and 40 per cent. In a bad year, he buys what he needs from Alberta, Washington or Oregon.

The alternative for someone in his position is a $300,000 one-time investment in an irrigation system.

Aside from crop challenges, heat affects how much milk his cows produce as well as their conception rate. Before investing in a new barn a decade ago – complete with fans and misters for the cows – Schwichtenberg could lose 15-20 per cent of his production during the summer months depending on heat wave length and intensity, he said.

There are no items to show.