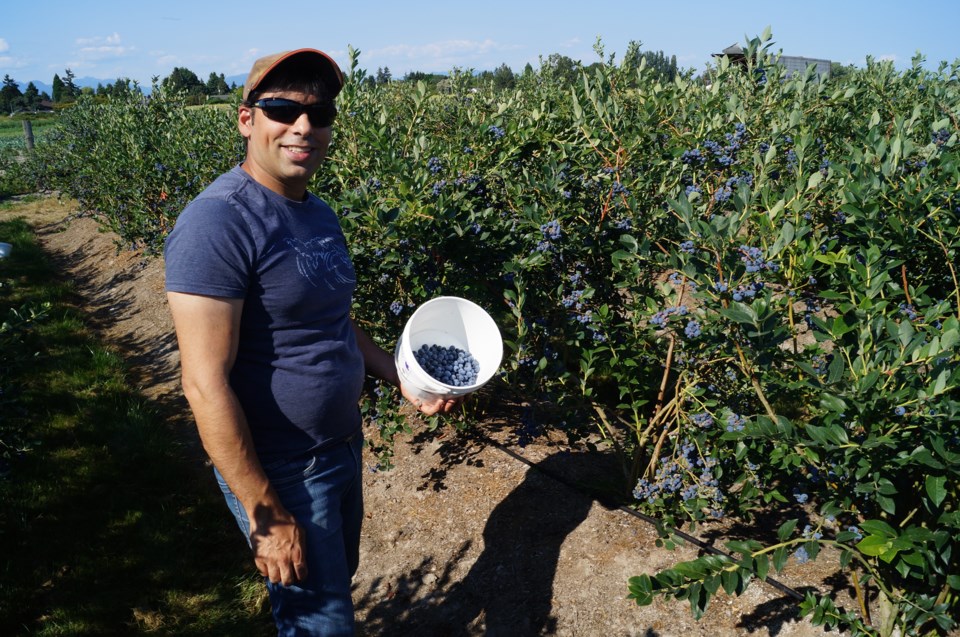 South Richmond farmer Sonny Sidhu at his family's G S Farm at 11400 No. 4 Road, where some u-pick customers may need to brush up on their u-pick etiquette

U-pick blueberry season has always been a semi-secret gem for local residents over the years, says farmer Sonny Sidhu, of G S Farm on No. 4 Road. However it’s gaining in popularity so much that some remindful public education may be required for those visitors hoping to score the plumpest blues in town.

Sidhu says he and other farms in Richmond are having to keep a keener eye on pickers these days. Theft is a recurring problem (Sidhu just installed a fence along one property line) and so are a minority of pickers who don’t respect rules, including littering. At one point this season, Sidhu, in a shake-your-head moment, had to discard a used diaper found between his rows of blueberry bushes.

“We’re lucky here in Richmond, especially with a good farming base to allow for things like blueberries and strawberries.

“When you come, enjoy your experience, but at the same time respect the farmland itself. It is a business for farmers and it is their livelihood as the majority of earnings from the crops. We put rules in place to maximize yields itself and to provide for every person who comes here to pick,” said Sidhu.

Nearing the end of July and into early August, during the “first pick,” is the best time for picking, said Sidhu. Deals can be seen in late August with the second pick.

“We’ll have done the first pick by the second week of August and then we wait for the second pick to ripen. They won’t be as uniform,” said Sidhu.