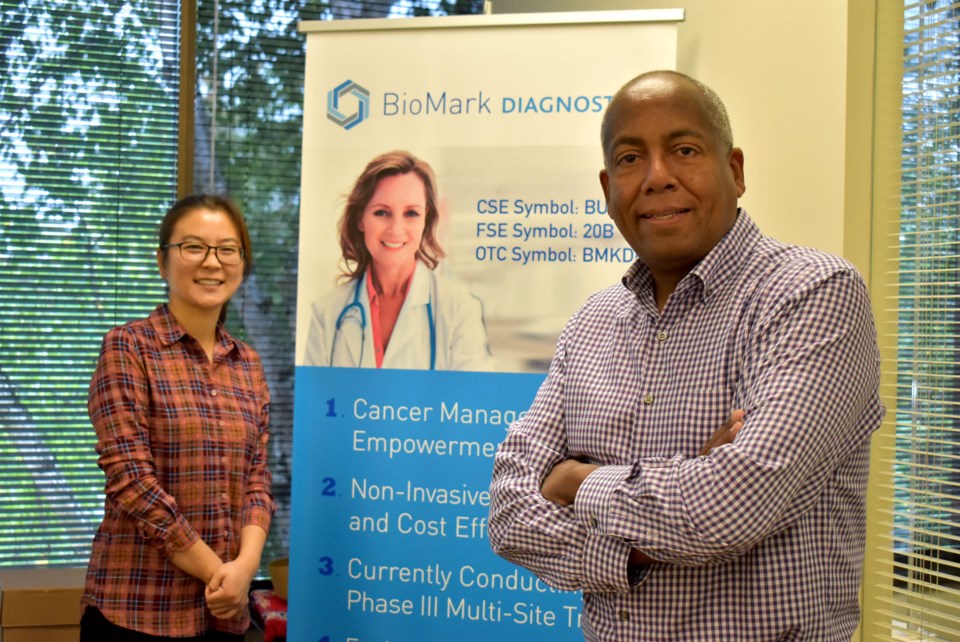 A Richmond biomedical company is in a race to create a rapid, cheap and portable saliva test for COVID-19 to help open up the economy and give people more freedom to move.

Rashid Bux — president and CEO of BioMark Diagnostics near Shell and Cambie roads — is hopeful the biomedical technology his company has been using, largely in cancer detection, will be able to quickly test for COVID-19.

Currently, screening is done with a nasal swab and the results can take up to two days to come back.

The goal for BioMark — and its affiliated company Bio-Stream — is to have a saliva test that gives results in 30 seconds and costs just $1 to take.

To identify the COVID-19 virus, Biomark’s scientists are shining a high-energy laser beam through a solution to see how it refracts — that is, how it scatters.

“When you pass light through, it reflects on the chemical bonds ... and every material will have a different pattern of scattering,” Bux said.

Using artificial intelligence, the data from the light scattering is being uploaded and fine-tuned so that each individual disease, be it COVID-19, the common cold or H1N1, can be identified in saliva.

The beauty of the system is that it’s portable, fast and accurate, Bux said.

BioMark, which has been in Richmond since 2013 and in the Lower Mainland since 2006, has partnered with university scientists to develop the rapid test.

Bux believes this will reduce anxiety, help open up society and return to some sort of normalcy in day-to-day life.

The tests could be used wherever there are normally large crowds, like at the airport, sports events, on mass transit and in schools, he added, so they know when entering if they have COVID019.

He’d also like to see it used in health-care settings as well.

“It’s also good to have (as) a first-line of defence for health-care workers — they’ve gone through hell in the last six months,” Bux said.

The rigorous process to develop the test includes harnessing artificial intelligence, scientists in labs in B.C. and Alberta, an ethical review as well as Health Canada regulations.

The rapid test using BioMark’s system is just one of about 12 projects Dr. Horacio Bach is working on at his UBC lab.

Because there are so many viruses with similar symptoms, being able to distinguish COVID-19 from other viruses during the pandemic is critical.

The testing system will hook up to a laptop and give a reading – giving easy-to-use, easy-to-read fast results, Bach explained.

“Ideally for the future, I want to have, when you put the sample (with) viruses, the laptop will turn red,” said Bach, who is an adjunct professor in the Division of Infectious Diseases at UBC.

This test should show even whether asymptomatic people are carrying the COVID-19 virus, Bach added.

“We can identify is this the real COVID-19 or caused by another family of viruses – and that can be done in 30 seconds,” Bach said.

Saliva is becoming more standard for COVID-19 testing, Bux claimed, and there seems to be fairly equivalent data between nasal and saliva testing. In fact, some think saliva might be better, he added, because the sample is more precise whereas the spot where a swab is picking up a sample isn’t necessarily clear.

Because the system is small – the testing unit is about 18 inches high – it can be transported to remote locations for testing, and eventually be used in developing countries, which have also been hit hard by the pandemic.