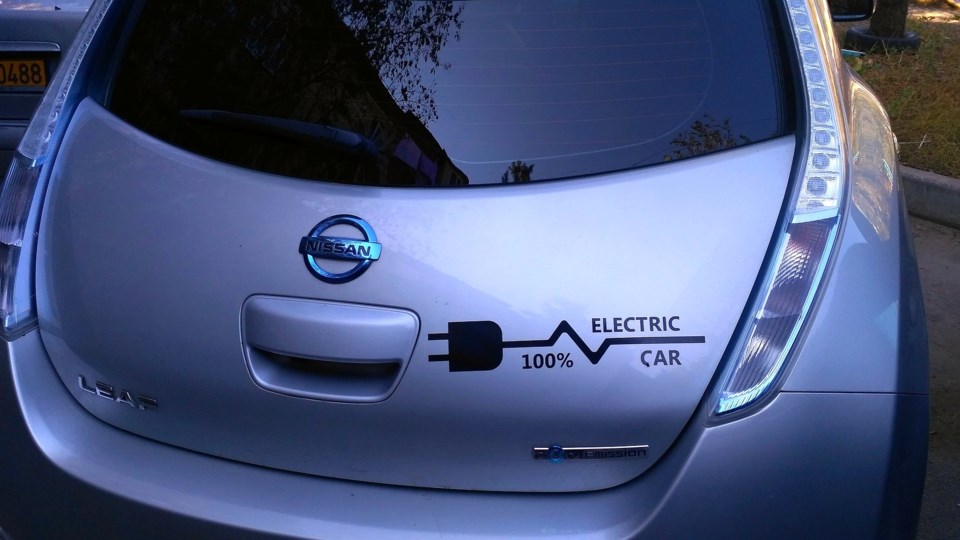 Electric vehicles (EVs) would be flying off car lots in B.C. – if automakers could only keep up with the demand.

Two weeks ago, applications for provincial rebates for electric and hybrid vehicles shot up dramatically, according to Blair Qualey, CEO of the New Car Dealers Association of BC, with cars from Tesla leading the pack in terms of demand.

“Since Wednesday, we’ve seen, I think it was $2.2 million worth of clean-energy vehicle incentive from the B.C. program being applied for,” Qualey said last week.

Matthew Klippenstein, a Plug In BC adviser, estimates that the incentives represent about 550 vehicles.

While high gas prices may have more British Columbians thinking about ditching their gas-powered vehicle for a battery electric or hybrid, the recent spike in provincial rebate applications is really driven by a new federal incentive that kicked in May 1.

It adds $5,000 to the $5,000 rebate that was available under the provincial government’s CEV for BC program.

“The Scrap-It program always runs out of money early because there’s always demand, so it would not surprise me if, by the end of the month, they used all of their rebates,” Klippenstein said.

EV sales dropped off in B.C. when the new federal rebate was announced in the federal budget, Qualey said, and then spiked when the new subsidy kicked in May 1.

It has been rumoured that Teslas have been selling like hotcakes, thanks to the new federal rebate program. Tesla did not provide a representative to comment.

But based on New Car Dealers Association figures, Teslas are the hottest seller in B.C.

Tesla dropped the retail price for the Model 3 Standard Range model in Canada to qualify for the new federal rebate, Klippenstein said.

Rebates are based on the manufacturer’s suggested retail price (MSRP).

Teslas have been too expensive to quality for rebates in B.C., but the company recently dropped its MSRP for the Model 3 Standard Range to $44,900 to qualify for the federal rebate. It’s a model Klippenstein doesn’t expect to sell very well, because it has a range of only 150 kilometres. But buyers can get “trim” versions of the Model 3 that have more features and a longer range, and still qualify for the rebate, even though those models would cost about $10,000 more.

“You don’t have to physically sell any of those sub-$45,000 vehicles,” Klippenstein said. “The fact that it’s on the market, theoretically, it means trim models above that price, up to $55,000, qualify.”

Klippenstein said the Model 3 Standard Range is capable of longer ranges but Tesla uses software to throttle it to 150 kilometres.

“They created a version of their car with a software-crippled battery which only has 150 kilometres of range, so nobody’s really going to buy it,” he said. “The only thing is a little line of code in the software which says ‘Treat this battery as if it’s like 24 kilowatt hours instead of 50 kilowatt hours.’”

Barriers to increased EV adoption include not just the price, which subsidies can address, but also availability. Auto manufacturers build a limited number of EVs and hybrids, so some models aren’t always available to drive off the lot, forcing buyers to wait months to take delivery.

“The waiting times are unlikely to ease until 2020, possibly 2021,” Klippenstein said.

The new ZEV mandate legislation, recently introduced for first reading, requires 10 per cent of all vehicles sales in B.C. to be battery electric, hybrid or hydrogen fuel cell by 2025.

B.C. is already halfway there. According to Qualey, EVs and hybrids now account for 4.8 per cent of new car sales in B.C. And when trucks and SUVs are removed and only passenger vehicles counted, it’s 15.4 per cent.

“Even without incentives, I think we will easily beat 10 per cent by 2025.” Klippenstein added that B.C. has surpassed Quebec to become Canada’s top EV adopter.