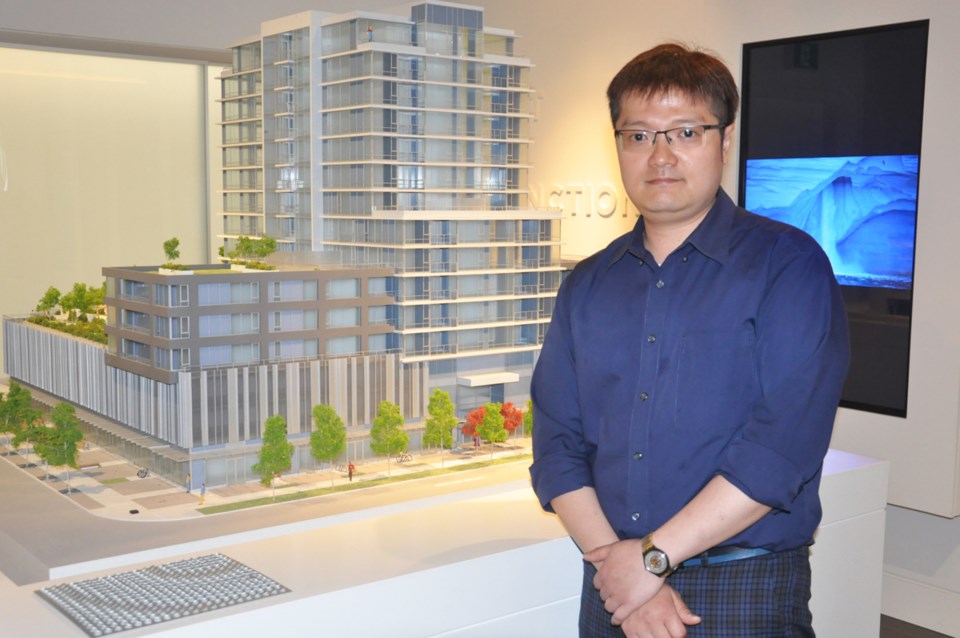 A Richmond developer is building a condo that uses geothermal energy — thermal energy found beneath the Earth’s surface — as the main power source for homes.

However, unlike customers who purchase energy from major geothermal facilities, residents of the 105 condos at 8151 Anderson Road will get their power from a geothermal infrastructure built underneath their tower.

“I don’t know any other condos in Richmond that have their own built-in geothermal facility,” said Alvin Cheung, the project manager at ALFA.

Once the condo has been built, the facility will provide heating and cooling, and hot water with minimal environmental impact.

“The principle is that it’s cooler underground than the surface in summer and warmer down there in the winter,” said Cheung.

“Residents won’t have bills for heating, air-conditioning, or hot water, because they all come from free energy. There are just some small electricity bills for lighting facilities,” said Cheung.

He said this system is a “win-win” for residents, developers and the environment.

The operation fee for the geothermal energy is included in the strata fee, which according to Cheung varies from $300 to $450 for one to three bedroom apartments (there is no gym or swimming pool in the building). The strata fee also contains gas bills, he added.

The developer who owns the geothermal facilities then takes money from the strata fee every month.

“The installation is $1.3 million for this project. If we take $100 from the 105 units’ monthly strata fee, it takes about 10 years to get the initial costs back,” said Cheung.

“But after that, the company will continue to make money from the facility. So it’s beneficial in the long term,” he added.

Cheung said most developers don’t do it because it requires a big initial investment of time and money.

The whole system needs to be designed and built in place before the construction of the building. That means the condo tower takes longer to build than regular ones, according to Cheung.

“And you have to find the right supplies for the facilities, which can also be a challenge,” he added.

Cheung said ALFA didn’t factor in the geothermal installation cost to the original price of the condos, although he didn’t reveal how much the condos were sold for.

“Because it’s still a new concept and we want to lower the bar for buyers. Also, we see it as a way to market our brand and make the company stand out in the condo market,” he said.

“We hope geothermal condos will get more common. The more people build them, the lower the facilities will cost.”

All units have been sold through presale after the project was announced two years ago, according to Cheung.

Including the one on Anderson Road, the company plans to build six geothermal condo projects in Richmond. Cheung said he is not sure when the current project will be completed and the other five also don’t have a timeline yet.

The City of Richmond has been promoting geothermal energy as an eco-friendly and cost-effective new energy source. The city-owned Lulu Island Energy Company launched in 2012 is now providing thousands of units around Cambie and Oval Village areas with heat and hot water. City Centre developments also plan to connect to the geothermal facilities.