Local fitness business has more to it than bunnies

Sunberry Fitness are looking to grow their women-only, dance-focused workout studio in the West Cambie area with a push into the online marketplace
Mar 10, 2016 4:20 PM By: Philip Raphael 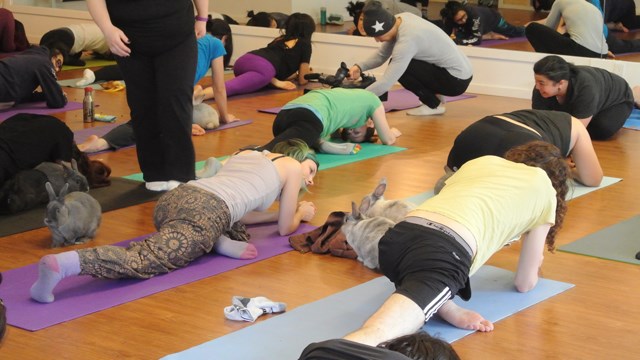 Bunnies roamed among the yoga mats during a special workout session at Sunberry Fitness in January. The event drew plenty of attention to the small studio, which was recently among the finalists in the Small Business BC Awards competition. Photo submitted

Two former Richmond high school friends are out to prove their business success to date is not just about the cute factor of being able to take part in a yoga class amidst a litter of adorable, floppy-eared bunny rabbits.

Nancy Lin and Julia Zu, co-owners of Sunberry Fitness are looking to grow their women-only, dance-focused workout studio in the West Cambie area with a push into the online marketplace, rather than expand in the old-fashioned, bricks and mortar way.

Mindful of the capital and subsequent overhead involved to go beyond their current 1,500-square-foot office and dance floor space, the duo are planning to offer their fitness dance classes in video form for a multitude of platforms, from smart phones to smart TVs.

“A lot of our clients come from outside of Richmond because they like the type of classes we offer. And they have been asking us when we are going to have a fitness studio closer to where they live,” said Zu. “But with many of those same clients being stay-at-home moms who have very rigid schedules, we thought that giving them the ability to work out where and when they want to with online access was the way to expand our business.”

Plans are to go live with the online version sometime near the end of 2016.

It’s that type of innovative thinking that helped the pair of business partners earn a top five finalist finish in last month`s Small Business BC Award competition. Entered in the best online marketing category, their placing came mostly on the strength of a commitment to provide clients with a monthly stream of special events designed to offer fresh and new experiences.

Last November, Zu, who studied business and finance at the University of Toronto, and Lin, who took civil engineering at McGill University, decided to launch a yoga workout day with a studio filled with rabbits from Richmond’s Bandaids for Bunnies group which is dedicated to helping abandoned former pet rabbits receive medical care and shelter.

The idea built on a Vancouver yoga studio’s move to have cats prowl around its clients and it met with great success.

When word got out about the bunny-fest for a class last November the spots at Sunberry Fitness sold out in two days. A second session in January was at capacity almost as soon as it was announced. And hopes are the third session with the cotton tails on March 20 — two back-to-back classes — will be as popular.

All proceeds from the special yoga events are donated to Bandaids for Bunnies. When the March sessions are done, it’s estimated the bunny rescue will have received a total of $2,000, while Sunberry Fitness enjoyed a boatload of exposure.

In addition to that event, Zu and Lin bolstered their online presence in a measured way by offering discounted classes through the popular Groupon system. But rather than try and flood their small studio with new clients to the detriment of their regulars, they capped the offer when it approached the building’s capacity.

“We didn’t want to upset our current clients by having the studio crammed with people. And we didn’t want to treat our Groupon buyers like second class customers,” Lin said. “That’s why we limited the number.”

The strategies, to date, have helped keep the studio on target to reach enrolment capacity by sometime in 2017.

Before then, the online video will have kicked off to provide another revenue and exposure stream.

Zu said cost for the video classes has not been determined, and thoughts are initial access will be free with longer and more detailed videos requiring a subscription fee.

“There are some dance workout videos already out there, but they are not very good quality and run for about three minutes — about one song — and that`s not long enough, ” Lin said. “Ours will be longer and much better quality.”

Another Richmond business, Lulu Island Winery, was also among the Small Business BC Award competition`s five finalists in the best international trade category.